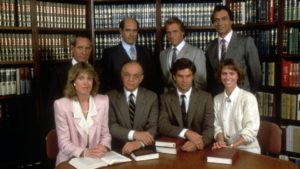 About to swap those books for pastries!

The general reluctance to do jury duty has always mystified me, especially in the case of those who have full-time jobs and so would get to spend time away from them with an excuse that will, for once, shut up the human resources department. Yes, one frequently heard objection to doing jury duty is not wanting to have to hear all the details of a horrible crime. Well, all right, I wouldn’t particularly want to hear those kinds of details either, unless they concerned the character of Jen Lindley from Dawson’s Creek being executed slowly and agonisingly, but I have always been quietly confident that I could do a great job with something less harrowing; say, a spot of white-collar bastardry. But the fact I’ve known so many people to be reluctant to do jury duty has often made me wonder if I am just completely deluded in my mania to do it, like those individuals one finds in every workplace who agitate for a management role even though they have no management skills at all. But, deluded or not, and after what feels like about a hundred years of life on earth, I finally received a letter telling me I’d been randomly selected for jury duty. It wasn’t delivered by a man in a powdered wig and it didn’t have a wax seal, but you can’t have everything.

Now, all those who think I’m a complete idiot may be surprised to learn that I have a law degree, meaning that I wasn’t coming at jury duty from the standpoint of a total amateur. However, even while telling you I have a law degree, I should point out that entry requirements in the early nineteen nineties were not nearly as strict as they are now. Too, I was admitted as a graduate, and the law school I went to had a ‘Let’s mix it up!’ approach to admissions, so I’m pretty sure they only let me in because I happened to be the sole person who applied for the course who had my specific undergraduate degree. As well, and at the end of the day (which is, I have been told, an expression that lawyers like to use), I don’t remember anything I studied at law school except that disclaimers aren’t worth a damn legally. Furthermore, I had basically only wanted to go there because of L.A. Law, and the life it showed me of striding out of breakfast meetings at which a platter of delicious-looking pastries had been served on a big, shiny table. So, I didn’t really want to be a lawyer; I wanted to be a lawyer on TV, just as, I have read, Kirstie Alley trained as an interior designer only to realise eventually that what she really wanted was to be an actress playing an interior designer, rather than actually being an interior designer. I, on the other hand, didn’t want to be an actress playing a lawyer, I wanted to be the fictional lawyer herself. And I am genuinely ashamed of my motivation, incidentally, and am not under the delusion it’s sort of cute; the fact is, my university place could have gone to someone who did something useful with it. I feel so badly about it that, on the one hand, I would argue they should weed out out all law school applicants who watch legal dramas but, on the other hand, we would then probably end up with a national shortage of lawyers, difficult as that may be to imagine. Too, I will say that I’ve received my share of punishment in the form of two decades-plus of people announcing scornfully, ‘I thought you had a law degree!’ whenever I am, amazingly enough, unable to break out thorough and up-to-the-second free advice for them on anything law related.

So, given how shallow I am, it seemed astonishingly appropriate that when I was finally sitting in the jurors lounge at the County Court, it had a visual display about juries and popular culture that exhibited highlights from ‘The Lighter Side’ of jury duty: namely, the excuses that various fools had used when attempting to get out of their civic duty. It is in this lounge that you wait for your number to be drawn from a lottery to see if you will make it to the courtroom, and then be placed in the further lottery of getting on to an actual jury. The lounge, a large area with rows of plastic chairs, reminded me of being at the airport, which is something I enjoy. However, being in the jurors lounge is even better than being in a departure lounge, because there are magazines, tea and coffee facilities, and a pool table. We were shown a corporate video that explained everything in simple words and that contained a dramatisation of the jury-selection process. This included a potential juror talking at length about his bowls hobby in an effort to be excused, which was certainly no less exciting than what I can remember of Crownies. Finally, the lottery took place, and mine was one of the last numbers drawn to be one who would get to go up to the courtroom.

After the, delightful, tipstaff initially led us off the lift at the wrong floor, we eventually made our way into the correct courtroom, where, again, the process was explained to us: how we needed to stand and announce that we were present, or that we wanted to be excused; and that if our name were read out, we had to walk past the accused, and that if he challenged us, we were to return to our seat. I can relay this information to you now, but at the time, as I usually do when anyone’s giving me instructions, I stopped listening, and then spent a lot of time panicking about not knowing what to do. I was so nervous when I said ‘Present,’ that almost no sound came out of my mouth. Finally, our names were called. I sat in torment until, just like I was in a movie, my name was called with only one spot in the jury box remaining. Now, the only reason I had remembered to walk past the accused was that I’d been internally mocking another would-be juror for walking in what I was thinking of as a crazy circle, before I realised he was actually just doing as instructed and walking past the accused. So, I got to my feet, walked past the accused and was almost at the jury box when he challenged me, so that I had to head back to my seat and once again become a sad-old-loser member of the public. When the ‘successful’ jurors were sworn in, I noted, bitchily, to myself that a couple of them had problems repeating the oath correctly, even though English was clearly their first language.

To overcome my disappointment, I decided, like someone sourly purchasing a ticket for a musical they’ve auditioned for unsuccessfully, to go and observe the trial. A friend encouraged me to attend, saying he didn’t think it would look strange if I went, citing the existence of ‘courtroom groupies’; I pointed out that it wasn’t Charles Manson who was on trial. I will say, though, that the fact I could discuss the case with my friend was one of the few upsides of not getting to do jury duty, even if I wasn’t getting paid (and, having already mentally spent it, many times over, I was genuinely upset at missing out on that $40 a day) or getting, as I had vaguely thought was the case if you serve on a jury, a free lunch.

On the first morning of the trial, the court was closed to the public while the plaintiff’s evidence was given, so I was shut out of there until lunchtime. On the way down in the lift, the prosecution barrister apologised for the fact that I had not been able to get in and observe. I replied, completely insincerely, that I didn’t expect the whole thing to be arranged for my convenience. When I finally got into the courtroom, I realised that another of the few upsides of not having been selected for the jury was that I was privy to what happens in its absence, which is a great deal, as they are, of course, sent away whenever there is a point of law to be discussed. In fact, the jurors were probably in the courtroom less than I was. I peered into their room whenever the door was open, and once heard some laughter. I wondered if being one of them would be like being on a coach holiday, with all the sudden intimacy and alliances and hatreds formed; whether, despite the seriouness of what they were doing, they felt as though they were having a vacation from their lives.

When the jury was out of the room, the lawyers chatted and talked shop as if no one could hear them. What struck me was not that they were saying anything controversial – they were merely, for example, discussing the idiosyncrasies of certain courts – it was their air of being in a bubble, even though the accused’s family was there every day, as was, naturally, the accused. One afternoon, a witness went astray, necessitating a lot of frantic texting and telephoning by one of the instructing solicitors, and I must say that that was a bit of excitement. When I heard the concluding arguments, I was reminded of how suggestible I am, and how I’m always convinced by whomever I’ve heard from most recently. Most annoyingly, though, I missed the verdict being handed down because I was sure it would take a couple of days for the jury to wrestle it out. However, it all got done and dusted in a day, the only one on which I stayed home, proving my instincts about anything to do with the law to be as erring as ever.

So, observing the trial did, if nothing else, first, make me realise that it’s probably best that I don’t ever do jury duty, given my own limitations and given what is at stake in a trial; and, second, remind me that being a lawyer is something that most people should strenuously avoid because it would be too hard for them. This is unlike all the jobs that, to my mind, would be quite easy. For example, there’s being a spin bowler. Granted, I’m not entirely sure what’s involved in this but I once saw television footage of a famous spin bowler plying his trade and couldn’t see what the big deal is. Then there’s being a pilot on a commercial airline. It seems to me that the computers would do it all for you while you thumb through a magazine. And how hard can being a pharmacist really be? All they do is type up whatever the doctor’s already said. And I can never see that writing for Saturday Night Life is as taxing as is claimed. From all the books I’ve read about it, and despite all their weepin’ and a wailin’ and buckets of self-pity about the many all-nighters they’ve pulled in offices where people have seen fit to urinate in jars, those writers get a lot of time off. By contrast, being a lawyer is hard, because the law grinds so very slowly, as opposed to the briefing, preparation for and trying of a case taking less than one hour. That speed of things is the real magic of life as a television lawyer, even more than having a sharp suit, and a sharp mind and taking no nonsense from anyone.