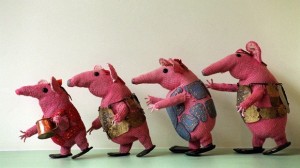 Cult TV; something you’re unlikely to find on Mamamia

Unfortunately for me, though not for anyone else, I am not famous, and therefore I hardly ever attract abuse on Twitter. About the only time I can remember this phenomenon occurring was back when I was keeping myself entertained by tweeting my thoughts on Aaron Sorkin’s latest effort to kill by means of aggravation-based coronary – namely, The Newsroom – and a lady sent me some hostile tweets regarding the pointlessness of watching and tweeting about something I detested. Quite possibly, and even though her tweets read like threats from a kidnapper with no time for proofreading, she was entirely correct; in fact, even my own mother thought my Twitter foe had raised a good point. However, having, as ever, learned nothing, I continue to spend a lot of time watching and reading things that I find annoying – and the one I spend perhaps the most time with is Mamamia, the Australian website for women that has seven billion readers, or some such.

Now, there are several reasons that I wish I did not find Mamamia annoying. The first is that my finding it annoying reminds me daily how much easier a woman’s life must be when she has the customary genuine interest in hearing that someone, anyone, is expecting a baby. Because I follow Mamamia on Twitter and it posts about a thousand tweets a day, I constantly feel like the robot in Bicentennial Man, but like the robot in Bicentennial Man if he weren’t endeavouring to become human, as I simply do not have it within me to rejoice from the depths of my heart that a breakfast-radio host is taking a well-publicised dive into the gene pool. Second, when so many people are so hostile to a massively successful female-driven enterprise, I am unavoidably reminded of when Mick Jagger used to make patronising comments intended to quash Madonna, back when she was first conquering the world with her messy perm, rubber crucifixes and guitar-less music. The third reason, which spins off from the second, is the extremely significant problem that by expressing any opposition to Mamamia, I feel am getting in the ring with people like Rita Panahi and David Koch, which is like being forced to make a horror choice between Michael Leunig and Fox News.

But, all that aside, here are my problems with the website (even as I acknowledge at the outset that, yes, yes, by no means have I read every single thing that has ever been published on it). First up, there is the question of what Mamamia would make me conclude about human women were I an alien and it were my only clue to what these people are like; well, it would make me think they were one big leaking breast. Dipping into the website generally makes me feel as though I’m at a meeting of one of those book clubs one hears about in which no one wants to read the books, they just want to talk about their children. Yes, indeed, a wide variety of matters, including political ones, are addressed on Mamamia and I, for one, appreciate the issues of the day being addressed in an easily digestible form. However, it always feels to me as though the website’s heart is really in endless articles about how working mothers are juggling, juggling and juggling some more, but are finding that it’s all worth it; or about how someone who used to be a lawyer has decided to stay at home with her children and get thrown up on a lot, but is finding that it’s all worth it; or on the ‘heartbreak’ of being separated from one’s child for a few hours when they start school but – or so I would hope – finding that it’s all worth it. Of course, given that most women will become mothers at some point, there is nothing wrong with Mamamia’s focus on the state of being a mother, except that the focus itself is so often as wet as baby food.

And it is the predictibility of Mamamia that plucks my nerves, as I long to be surprised by something that I read on there; instead, my feed is full of tweets about articles that assume I give a damn about Photoshopping; or about how someone or other is ‘never stepping on the scales again’; and that I agree fashion models are as threatening to society as a huge meteorite, but that I must constantly be reminded of their devil’s work by clickthrough-rate-increasing picture galleries; and that I care about whether or not a celebrity is a role model for someone or other’s child; and that it is going to turn my day around that a ‘real’ woman has posed with no clothes because she is very proud of her body. Then there is the assumption that the only television anyone is interested in is Offspring, The Bachelor, The Voice and their kind, and that I am overwhelmed with unquestioning gratitude and admiration whenever a male celebrity speaks out against domestic violence, which is, let’s face it, is not exactly a risky standpoint for him to adopt. And the fact that I can be getting irritated at someone saying domestic violence is wrong demonstrates perhaps better than anything else the way Mamamia can often make me want to disagree even with sentiments with which I am in agreement, and I primarily attribute this to the website’s tendency towards twee nicey-niceness. Let’s put it this way: if Dorothy Parker were alive today, it’s difficult to imagine anything she wrote would be cropping up on Mamamia.

Exhibit A is an article by one of its regular contributors about how when she was in her thirties, she had a certain idea of success, but that in her forties, she ‘threw it in the bin’. Now, and perhaps I am too cynical, the trouble with this piece is that its chief purpose seems really to be to spell out the author’s many achievements, which is something that deserves a very harsh sentence from the Court of False Modesty; I don’t have the energy to type up the whole list, but suffice to say they include include having published five books ‘to terrific reviews’. At any rate, and in perhaps the least surprising turn of events in world history, at least if you are a regular reader of Mamamia, we discover she has learned real success is contributing to her community, and seeing a friend’s eyes sparkle, and so forth (though I imagine it is a great deal easier to be so sanguine if you have under your belt the list of attainments she herself details in her column, as opposed to living in a council flat with three children under four). Now, if anybody I know gave me a speech like this, I’d be organising a hit on them, but the website’s readers are, it seems, supposed to find this orgy of self-congratulation profound. Furthermore, the post is sponsored by Dr Lewinn’s, whatever that is, which perhaps explains why it reads like a storyboard for a television advertisement for a major bank that has public relations problems.

What would fill my heart with gladness would be if female-centred media did not so often give the reader the experience of being trapped at a kitchen tea with people who like to spout platitudes and have terrible taste in television. Meanwhile, and in a reversal of what is normally the case on the internet, the comments beneath Mamamia‘s articles are not infrequently more interesting, complex and well expressed than the articles themselves, so perhaps the website could just stop posting articles altogether and operate solely as a comments board. (That would also get around its other hostility-creating practice, of insufficient financial rewards for contributors, though, unfortunately, and let’s be fair, it is very far from being the only offender in that area.) Alternatively, it should publish only those articles that pass the most rigorous application of the ‘Is this actually just a load of massive flapdoodle?’ test. That way, everyone’s happy; or, at least, I am, and I’m a woman too, after all, even though reading Mamamia usually makes me feel like I’m not.