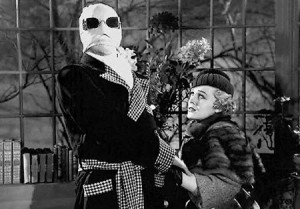 OK, this is actually the Invisible Man!

It seems that this is to be the first column in which I will go all ‘gender politics’ – something that I do occasionally, in between talking about either the silver screen or about television programs to which other people feel either hate or indifference. My wading into a few different areas of this shark-filled pond has been provoked by the fact that Father Time has ticked off another week, meaning that we must be due for yet another column from a female about how, now that she is older than thirty-nine, humanity at large treats her as though she were invisible. Personally, I find these ruminations deeply bizarre, and I’m forty-three years old, so I’m not exactly weighing in as a representative of the youthquake.

What I badly need from women who make such complaints is detailed evidence – namely, photographs – of what they looked like when they were twenty-two or so, as I believe my perusal of these Exhibits A and B is the only possible method by which I may be able to make sense of these bleatings. This is because I truly can only see that physically ageing and ‘losing your looks’ is an especially big issue if you are the variety of human who is so very fetching that you have been able to make a handsome living as a model, an occupation almost entirely dependent on one’s appearance (unlike, say, even that of being a ‘dishy’ young actor, in which a person can score credibility points by hideous-ing up). In the case of the billions of women who don’t fall into this enviable category, who in the name of the most freezing of hells really cares?

And, speaking of models, enough with grown women writing articles about how these genetically gifted young things make other females of all ages feel bad about their bodies. To start with, I see quantities of teenage girls today who are the proportions of a McMansion and getting around in clothing so small it would restrict the movements of a Beverly Hills 90210 figurine, and good luck to them, so all seems to be fine and dandy with many of the young folk. Furthermore, being a grown woman and fretting that you don’t look like a model is the equivalent of reaching adulthood and fretting that your car isn’t Chitty Chitty Bang Bang. By and large, if you’re not working as a model, of course you don’t look like a freaking model. If you looked like a model, you would have become one, because who wouldn’t take the opportunity to be paid heaping helpings of cash without ever having to formulate an idea for a ‘blue sky meeting’, or answer mystifying questions for the purposes of a ‘performance appraisal’? However, while Leonardo DiCaprio’s love life may indicate to the contrary, models are actually a tiny minority of the population of the world, and it’s really no problem should you not happen to resemble one, so, please, move on with your life.

And, unless you are one of these very few who is actually stunningly beautiful enough to derive an income from it, as per Victoria Principal’s character in the ball-tearingly superb telemovie Mistress, being youthful and conventionally attractive doesn’t actually materially improve your quality of life – not really. And I’m not even saying that with any sense of satisfaction because, believe me, I’d like to see someone enjoying themselves. I’ve been acquainted with young and attractive people, and witnessed that their days are still full of the tedium that comes with having a beating heart: tasks such as cleaning venetian blinds, the self-disgust-filled moment of discovering that you threw out the television guide by mistake, the immense boredom and expense of getting a passport renewed, or needing to work out into which out of fifty-five different reeking bins an empty plastic bottle is supposed to be deposited, while simultaneously fearing that a rat is going to appear out of the blue. That is, unless you are also very rich, being young and comely doesn’t mean that you will constantly have people licking your boots, lighting your cigarettes and relieving you of the torment of existence. And it’s not even as if you have to be particularly physically attractive to find a partner, given that there are plenty of people of the homelier persuasion who are not shouldering the rent alone.

In one recent account I read of the horrors of ageing and its accompanying ‘invisibility’, the writer was, as well as dishing out the customary big old fawn over Ms Meryl Streep, fretting over being treated dismissively at a cosmetics counter. Personally, I would prefer this uninterested approach to the opprobrium you can attract when you are a young person, when everyone thinks you are going either to shoplift, or try all the samples without buying anything (which was, indeed, my practice as a teen). And even if such a column writer’s intention is to address the topic of people not paying attention to women generally when they’re forty or more – that is, not just not wanting to molest them with their eyes, but ignoring their opinions and all the great riches they have to offer as people – I can only say Really? Aside from anything, I’m sure we’ve all had our share of terrifying menopausal bosses whom others would no more ignore than decapitate themselves and then fry their own head in a pan. Unless a given middle-aged woman is fortunate enough never to mix with another human in any capacity whatsoever, she’s going to be making her presence felt somehow and therefore isn’t going to be invisible to anyone who actually matters.

It’s not as if I’m coming to you live from the Planet of Gigantic Self-Esteem but even I can’t see why a person would trouble herself with what some bint at a cosmetics counter, or 25-year-old advertising executive drinking saucily named cocktails at a North Sydney nightspot, thinks – or, more accurately, doesn’t think – of her. Especially given that, as I say, unless you were particularly attractive and well groomed when you were young, these people would probably have been ignoring you then as well. Assuming your greatest ambition is not to date Sam de Brito, a gent in middle age who is not shy to commit to print his preference for ladies young enough to be considered for a job at the variety of juice bar that could be described as ‘pumping’, I simply cannot see that it matters. In fact, I strongly advise any woman who is troubled by the concept that men no longer look at her as they once did, to rent and view Brian de Palma’s hilariously voyeuristic Dressed To Kill and she may well find herself quite content to have no man ever look at her again.

On a topic opposite to that of older women being ignored, I lapped up all the brouhaha about child beauty pageants last year, which arose due to one being held in Melbourne, complete with visit from highly decorated young American miss Eden Wood. This particular art form has been of interest to me ever since I saw several years ago a documentary about such competitions, which featured footage of a grown man singing a love song into a microphone to a baby who was wearing a pair of diamante cat’s-eye glasses. However, much as I enjoy a lively debate about a non-issue, what sent me crazy was when female columnists would weigh in on the subject of how terrible it was that other people’s children were parading around in makeup and sparkly dresses for the promise of prizes, and would then trot out self-satisfied statements along the lines of ‘Thank goodness my little girl is a tomboy and her favourite thing is to romp healthily around the yard!’.

Right-oh, I understand these people’s relief that their daughters have not somehow without their knowledge ended up in the hands of the filthy pageant peddlers; what I want to know is why should it be the case that stereotypically non-girlish pursuits should be regarded as superior to stereotypically girlish ones. To start with, being in a yard is massively overrated, considering all the spiders that are ruling the roost and the general discomfort of it all, not to mention good old Mr Sun giving you cancer. As a child, I avoided this place whenever possible and the only game I would grudgingly play outside was re-enacting Gilligan’s Island, with me as movie star Ginger, and my companion having to play everyone else. (In fact, on one occasion, I locked my companion outside, so that I could actually watch Gilligan’s Island on the television, uninterrupted.)

Yes, of course I appreciate that not all girls want to parade around in their mother’s cast-offs and play with dolls but, geez, most of the ones I knew did. I have to be honest and say that the ones who didn’t enjoy such pursuits ended up being practically half-man. That is absolutely fine, naturally, but not everyone wants her daughter to become a motor mechanic (extremely useful though that may be) or follow in the footsteps of Chastity Bono. Dressing up or playing with dolls is no stupider than climbing trees or kicking round an insanitary old football, not to mention that it’s also a lot less dangerous. No one ever ended up in hospital after a pleasant session of styling a doll’s nylon locks and painting its lifeless face.

And, on a semi-related topic, I feel that people massively overstate the effect that Barbie Dolls have on young girls’ self-image, perhaps partly because they had to plough through Toni Morrison’s The Bluest Eye at some point. I recall that when I was a child, I, like every other child on the face of the earth, took things extremely literally. Namely, I loved my Barbie, and wanted to spend endless time with her, whether pushing her round in a friend’s lively looking pink Barbie Campervan or forcing her stiff limbs into a diving pose for the purposes of my Barbie Pool Party, but I did essentially regard her as a small plastic creature, not as a viable design for living. Does anyone who isn’t penning The Beauty Myth really go to the bother of converting Barbie’s measurements into human measurements? Again, while I loved my Barbie dearly, I didn’t long to have an eighteen-inch waist, I just wanted to be any living person whatsoever who didn’t have to attend school and be harassed by old bags.

And, on that note, I still take pleasure every day, even though it’s now over a quarter of a century since I completed compulsory education, in the fact that I’m no longer forced to study geographical formations, write in a straight line or wear a stupid hat while commuting. While no one likes to complain more than I do, I just can’t be bothered fretting about invisibility, especially when I can impose my views on people through the magic of the Internet. I mean, good lord, how invisible can a person really be if she’s publishing columns about how invisible she is?