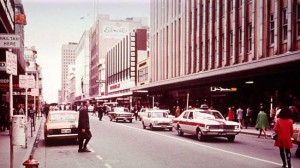 As I boarded the plane to Adelaide, where, with my mother, in celebration of her birthday, I would be catching the Ghan train to Darwin, I saw an old fellow with a Bill Kelty-style mop of hair wearing an ‘I’m not Mr Right I’m Mr Right Now’ t-shirt, and felt a surge of optimism that is unusual for me at any time, but especially when I am involved in going on a holiday. You see, the way the holiday feeling tends to work for me is that in the lead-up to going away, I bitterly resent the idea of any change to my day-to-day life, but then after the vacation is actually over, I spend at least a week wanting to commit suicide because, it seems, all enjoyment for me is over forever more.

The big problem with travelling is that you know there will be much to deal with when you reach your destination, primarily because, even when you are staying in the country in which you actually live, there is a good chance you won’t know how to do the simplest things to enable you to exist – particularly, how to order a glass of tap beer, or how to buy a ticket in order to travel on public transport. In contrast, it is reassuring when you are still in transit to find that the same questions raise their heads every time. While swinging towards the departure gates at Tullamarine, filled with the smug feeling of having gained entry to an exclusive nightclub (not that I ever have gained entry to an exclusive nightclub) I always have after having made it through security, I wondered anew about the exact level of disappointingness it is for the heterosexual man that there are no flesh-and-blood supermodels in the Victoria’s Secret shop. Then, once I am on the plane, there is always the question of why do these aeroplane folk still feel the need to let you know that you can’t smoke while you are on their vessel? Do they think Don Draper is on board? And if the plane crashes at some point after I’ve ignored the safety demonstration, will I feel the way I used to at school when I hadn’t paid attention in class and was then suddenly called on to take part in an activity about which I knew nothing, which was always especially dicey when it involved a set square or any other instrument in my neglected geometry kit?

Because I was flying with Qantas and was in search of entertainment, I was dealing with what these people call ‘Radio Q’, and, as is customary, discovering that the station to which I wanted to listen did not exist on the ‘dial’ and having to make do with something with ‘classics’ in the name, although I feel it is a loose definition of the term if you’re including ‘Dust in the Wind’ by Kansas. When I am travelling on a flight that is shorter than two hours, I am always well aware that we will be on the ground before the playlist reaches the tune to which I’m especially looking forward. Unfailingly, however, I will find myself at the point in the song cycle whereupon I have to listen to something customarily fatuous from Wings, or to Don McLean’s horrible ‘Vincent’ (‘Morning fields of amber grain/Weathered faces lined in pain’; thanks to McLean, my own weathered face was lined in pain). And if there’s an easier job than being an announcer on Radio Q, I would like to know what it is. Despite the non-challenging nature of what she was doing, Angela Catterns spoke strangely deliberately, as though she were a hostage reading a message from a terrorist, and I noticed this was particularly the case when she was called upon to utter the term ‘punk band’. But, speaking of the ‘punk band’ in question, I found the opaqueness of ‘Rock the Casbah’ a positive pleasure after the bald strokes of ‘Vincent’. (By the way, now that I’ve been able to conduct research, I understand that ‘Casbah’ concerns a monarch’s ban on rock music being defied, Footloose style, by the populace.)

Having landed in Adelaide without having heard the song I wanted to hear (Elton John’s ‘Bennie and the Jets’), I caught the bus into the city from the airport. Appropriately enough, given that pretty much all of the passengers looked like him, we travelled past a theatre featuring a production called The Music of Stevie Wright. The two women sitting in front of me had an exchange about this, with one of them making the point that she ‘wouldn’t want to see that, since he got into drugs’. The other woman defended him vigorously for a while, arguing that ‘The music was terrific’ but then even she was forced eventually to concede defeat, concluding that ‘He’s just a fat old man.’ I, in the meantime, and because I had been deceived by the internet, had no idea where to get off the bus, and sat mutely as the vehicle went in circles around the central business district. I have a firm policy of burying my head in the sand in such situations, but in due course I had to acknowledge that the bus was on the way back to the airport, meaning that I’d better get the fuck off it, which I did at some distance from the city, feeling worried, as does everyone who goes to Adelaide who is not from Adelaide, or, I gather, even who is from Adelaide, that I was going to be horribly murdered.

While, as thanks to my staggering knack for making the wrongest possible turn at any possible opportunity, I walked for about two hours through the broiling heat with my suitcase, I thought about two films I remembered that had been made in Adelaide: Travelling Light, which was about various individuals being bored shitless there, back in ’71; and Sample People, which does not count, because, while it was filmed in Adelaide, it was set in Sydney. Aside from all the murdering, the two things I knew about the city I was in were that ‘they never had any convicts’ and ‘they never knock anything down’, the first of which, at least, seems at odd with all the murdering. Too, many people have informed me, whether personally or in print, that it has a ‘creepy vibe’. I was greatly looking forward to this ‘creepy vibe’ and, disappointingly, did not particularly feel it, although, while those individuals I actually dealt with were pleasant beyond all reason, many people I saw in the street looked as though they were insane, drug addicts, criminals, or all three. Too, when you cross the road in Adelaide, the traffic lights thoughtfully count down the seconds you have to complete this task, so that you know precisely how long you have until the moment when you are most likely to be struck by a car and killed.

Still on ‘the creepy vibe’, once I finally reached the apartments in which we were staying and, as is my way, scoured the tourist brochures in the foyer, I was enraged to consider that I would not be in town for long enough to go on one of the ghost tours that were advertised. While all of them sounded excellent to me, the very best one appeared to be the tour of Ayers House and Adelaide Arcade, where ‘[w]ith 3 deaths, including a caretaker crushed in a generator, there is plenty of activity reported’. Furthermore, it ‘include[s] the use of ghost hunting equipment’. When it came to tourist attractions, however, all was not lost, given that, by pure chance, as it had happened while I still had no idea where I was, I came across a restaurant in which a friend of mine, who herself comes from Adelaide, had had the experience in the nineteen eighties of a waiter following her into the ladies and requesting fellatio (never fear, though; when she demonstrated to him that she was refusing to take this request seriously, he backed off and returned to his duties). Then, later, I came across a law firm by the name of Grope Hamilton. Now, no doubt Mr Grope is a very wonderful man but it seems to me that if ever there were an instance of it being advisable to change one’s name by deed pole, this would be it.

And the good news about Adelaide continued to come thick and fast as I found my favourite type of mineral water on sale in a convenience store next to ‘ The Taxpayer’, a designation showing an admirable disregard of marketing hocus-pocus and the whole concept that a bar should be called something that might induce its patrons to kick back and forget all their worries for a while. Once I was away from the hustle and bustle of Rundle Mall, I found Adelaide to be rather like Sydney after midday on a Saturday in 1982, if only ‘the Harbour City’ had had wider streets, fewer rats and, yes, the powers that be hadn’t knocked down everything they possibly could. And this state of affairs was more than fine with me. In the late afternoon, the heat broke, it rained and the air was life-affirmingly fresh, but I did see a bride hanging around a wedding venue, and I always feel sorry for a bride in wet weather, even though she was probably perfectly happy. The thing is, though, that I was perfectly happy too, because, in the spirit of doing a truly Adelaide thing (although the business has expanded so that I could now do it in several places in old Melbourne town), I bought a bag of Haig’s dark chocolate raisins and ate them until I was about to chuck.