Apparently, this is the Pine River

And so I stalked the Adelaide streets on the first, and so far only, Sunday morning I was in the South Australian capital, because I badly wanted a cup of coffee. Now, whenever anyone makes a big deal about wanting a cup of coffee I find myself wanting to shoot them in the eye, because it seems like an annoying pose of urban sophistication, so I won’t go on about just how much I was craving the hot beverage in order to get what our great friends in INXS would have called a ‘kick’. To cut a long and boring story short, I was unable to find a dispenser until a kind stranger, and fellow out-of-towner, pointed out that an Asian bakery was open and serving the poor man’s cocaine. I later discovered that had I only walked one street further down, I could have found enough coffee to keep the Sea Princess afloat, but that is the way of things when one is not on one’s own turf.

At last the moment came for my mother and me to commence our three-day trip on The Ghan, which, if you do not know, is a famous old train that travels from Adelaide to Darwin. Given my customary state of ignorance, I only became aware of it a few years ago, when I edited a thriller set on board that concerned a passenger – and possibly more than one, I do not recall – being murdered. The descriptions of all this excitement, and of the luxurious accommodation, I found alluring, and so I was only too pleased to accompany my mother Ghan-wards in celebration of her birthday, particularly as she, very kindly, paid for me, as there is simply no way I could have afforded it otherwise. Given her and my identical eccentricities and ways of enjoying ourselves (primarily, drinking sherry while speculating on the motives and relationships of, often long-dead, royalty and figures from the Golden Age of Hollywood), my common-law husband refers to my mother and me as ‘The Grey Gardens Express’, and, of course, the name never had been, and perhaps never will be, more accurate, than it was during our days in transit.

When we boarded The Ghan, the official who welcomed us was amazed that we would be taking our luggage on board with us, which begged the question of what, in God’s name, must the other passengers do when they want to wash themselves or change their outfits? At any rate, we settled ourselves and our suitcases into our compartment, admiring its clever design, which, I hoped would make travelling feel less as though all it were all one big fumble for toiletries. I vividly recalled the scene in Live and Let Die in which Jane Seymour as ‘Solitaire’ surrendered her virtue to Roger Moore, whom I remember as wearing silk pajamas, and reflected that they must have had quite a generously sized sleeper. The mater and I then settled ourselves in the lounge, and wonderful though it was, with its limitless free booze and generous nips of spirits in the gin and tonics, I was a little disappointed to see that, in contrast with what the book I edited had led me to believe, the other passengers were not society grand dames, captains of industry or Armani-clad gossip columnists. On the upside, even though I am forty-six years old, I was a teenager compared with most of the other passengers, so that was refreshing.

As the announcement came that we were approaching Snowtown, an elderly lady remarked, entirely correctly, ‘We don’t want to get off there.’ I was keen to see what I could of it out the window, but the same passenger engaged me in conversation just as we were passing through so that I, unfortunately, saw almost nothing, but it was enough to see that this infamous place looked more attractive than it did in the film. Generally, though, the great thing about travelling through the middle of Australia is that you can sit and read a book safe in the knowledge that you will barely have missed anything except for an exceptionally large anthill or termite mound. In short, it’s not exactly a tour of the stars’ homes, and you spend a lot of time on The Ghan debating whether you’ve actually seen a given sight: ‘Is that sandy bed the river they said we would pass?’ On the morning of the second day, we were told that coming up was an ‘Iron Man’ statue, which was six feet high, so, yes, merely the height of a tallish human man. There was a lot of discussion about whether we were on the correct side of the train to see the Iron Man, and many complaints from discontented Kiwis when it looked like there would be no Iron Man, though his tiny metal form did flash past eventually. 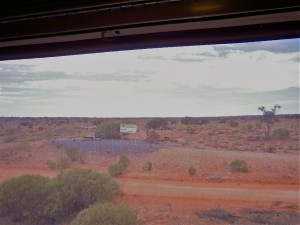 However, my mother and I weren’t dependent merely on the sights for diversion, as we had been selected to be part of a cable-television documentary about passengers travelling on The Ghan. The director had approached us while we were waiting to board, having thought that she was personally acquainted with me. It turned out we didn’t know each other at all, but by then it was too late for her to retreat, and she claimed to be interested in the fact that we were there for my parent’s birthday, even though, as we were forced to point out, the big day had been a couple of weeks earlier. In consequence, I spent a lot of time thinking about my hair and makeup; at one point, my mother exhorted me to look at the red earth but, as I pointed out to her, I was busy looking at my face in the mirror, which she usually was as well, given that she, too, was now obsessed with her hair and makeup in preparation for our time in the spotlight. In the end, I did not make the job of the documentary team any easier, given that the only obstacle I had faced in travelling on The Ghan was the considerable cost, which, as I have admitted, my mother had generously overcome. When their talk with me was over, I reflected on a time, years ago, when my uncle was selected to be on the late, lamented Sunday program, but that when it aired, he found that all that was left of his lengthy interview was a shot of his hands turning the pages of a document. 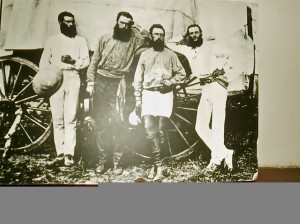 Workers at the Alice Springs Telegraph Station, or Melbourne baristas?

Once in Alice Springs, we had the choice of visiting the Pioneer Women’s Hall of Fame or a reptile park. We chose the pioneer women, unlike most people on the bus, who went for the reptiles. ‘It was a better world than what it is today,’ announced a hatchet-faced old bag in harem pants, despite the terrifying information that was all around us in the museum regarding clothes wringers; termite-nest floors; premature death; the need to fetch water from wells; and the 1915 rules for women teachers, including not loitering in ice-cream parlours. I spent most of the time thinking about how much the pioneer women would dislike me if they had the opportunity to meet me. As we browsed in the souvenir shop, Hatchet Face, who was busy trying to get a Seniors Card concession on the merch she was buying, bellowed ‘What are you doing? Come on!’ at her poor old husband, who’d been enjoying himself in a building that had formerly been a men’s prison. We then travelled an extremely short distance to the Royal Flying Doctor Service Museum. ‘That poor soul,’ my mother stated during our quick stroll around this institution, as she caught sight of mannequins receiving medical treatment from other mannequins. On the souvenir front, a CD entitled G’day Sing A Long, the cover of which featured a kangaroo passed out, with a tin of beer in each paw and one under his ‘arm’, was extremely alluring to me, except that it had an RRP of $29.95. The driver of the tour bus, while en route back to The Ghan, told us how Prince Charles had contracted food poisoning in Alice Springs while staying at a downmarket motel, which made my mother’s and my ears prick up, of course.

The next morning, we arrived in Katherine and got on another bus. ‘Hopefully, I’ll get us out to the Gorge,’ its driver told us, with less certainty than I would have liked. We drove through the town, which featured lovely frangipanis but, as the driver informed us, no pizza place. She told us it was going to be forty-seven degrees, and I wished I had, yet again, reviewed my will, to see who I wanted to cut out of it. I had vaguely assumed we’d be inside some kind of hydrofoil-style air-conditioned craft for our excursion down Katherine Gorge, and felt further disquiet when I came to understand we would be exposed to the elements in a craft with no walls. Once we were on the airy boat, the main thing everyone, including myself, was dying to see was crocodiles. At one point I saw a tree root that I thought might be a crocodile, but it was not, which meant that I, yet again, caused the documentary crew to experience disappointment. We also saw Jedda’s rock, from the film Jedda, but learned that it isn’t really Jedda’s rock, because when the last reel was being flown to England for processing, the plane crashed and the rock-based climactic scene had to be filmed again at the Blue Mountains. Back on The Ghan, it had been promised we would go past Benmah Yard; my mother and I, even though, or because, we had no idea what it was, were quite looking forward to this, and felt robbed when we could not see any sign of it. Once we got to Darwin, the documentary crew was again forced to interview us and I had as little to say as ever, given that, after all, we had only been sitting on an extremely comfortable train, not Burke and Wills-ing it. It was quite a relief, to me and especially to them, when we left these formerly upbeat people on the station platform, not to mention that it was exciting to be back in a capital city.

The main, and almost only, thing I’ve ever associated with Darwin is my grandmother boasting of donating her old dresses that ‘had gone under the arms’ to the victims of Cyclone Tracy, and I was pleasantly surprised to discover that it is next to pretty water and, like Katherine, is full of frangipanis. The only trouble was that I felt as though I were swimming in a vat of soup all the time, but I’m sure that come next July in Melbourne, I’ll be looking back on that sensation with great nostalgia. My mother and I went to an Irish pub for dinner, and ate delicious barramundi, and drank gin and tonics in tall glasses. It was very nice to be able to toast a woman who had given me forty-six years of life, and has been not only a mother, but a friend with whom, I could, yet again, discuss Wallis Simpson’s true feelings about Edward the Eighth; the motivations of Kate Middleton and of her immediate family; and whether or not Humphrey Bogart and Lauren Bacall’s marriage really had been a happy one, or whether she was too young and he was too controlling.

4 Responses to “Reach for the Top”