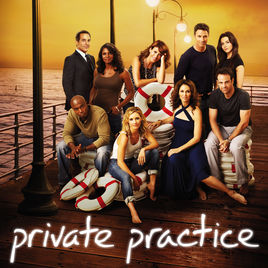 The Chamber of Horrors at Madame Tussauds, LA division

Now, almost anything capable of being screened on a device that disseminates TV programs has a good chance of reeling me in, as indicated by the fact I’m currently watching season five of ludicrous, if amiable, medical dramedy Royal Pains. Indeed, all the shows on the list of ones I truly loathe have reeled me in, like a pimp hanging round a bus station in Dawn: Portrait of a Teenage Runaway. These are: all of Aaron Sorkin’s oeuvre, except for Studio 60 on the Sunset Strip, which, unlike all his other shows, is an absolute blast thanks to its pomposity and lack of accuracy about anything whatsoever; and vile medical drama Code Black, which seems to have been conceived and written by a manipulative, non-human entity such as Edgar the computer. The one I loathe most of all, though, is Grey’s Anatomy spin-off Private Practice, all six seasons of which I have now watched, which I consider to be degradation unsurpassed by the people in Requiem for a Dream.

I’ve watched Grey’s Anatomy seemingly since I was born, even though Meredith Grey herself — at one time, with her dark outlook on life, one of the more interesting characters on TV — has ever less to do, and even as the staff’s mortality rate has come to outstrip, by far, that of their patients. So, how could I not attempt Private Practice, about stunningly beautiful neonatal surgeon Dr Addison Montgomery once she left the Grey’s Anatomy hospital, whatever its name was that week, for Los Angeles and a position at the Oceanside Wellness Group?

Now, even though I just finished watching all 111 episodes of PP, I have only sketchy recall of most of what happened in them, and I still vividly remember many storylines, and even dialogue exchanges, from contemporaneous stablemate ABC What About Brian?, a show that I’m willing to bet even the actor who played Brian doesn’t remember. PP, though, is a blur, of a revolting title design, with what may be a sunrise or may be a sunset, the title of the show in what may as well be Dom Casual; of actors who also appeared in Grey’s Anatomy popping up as completely different characters; overwrought cover versions of songs I don’t like playing at times of high emotion, and ‘comedy’ music playing whenever something that’s supposed to be funny is happening, such as arch conversations about sexual intercourse; of every Oceanside Wellness Group case leading to a debate in the staff kitchen about the rights and wrongs of it all, with always the cut-and-pasted-in observation that ‘We’re doctors! We’re supposed to save lives!’; of physicians going rogue, thighs clamped around the high horse, because ‘I did what I had to do for my patient!’; and inter-staff couplings that make no sense whatsoever, between actors who have no chemistry.

Because I so prefer watching television to living my life, watching the final episode of any TV show will usually affect me deeply. I essentially find it impossible to believe the characters aren’t real people, and for days I’ll dream about them, and imagine them going about their business, off in some other universe. That, clearly, wasn’t the case with me and PP, however, a show that committed the awful sin of not being good enough to be any good but not bad enough to be any fun. So, why did I keep watching? Well, I just can’t get interested in, for example, water police, but because I believe things would be better if doctors really were all great looking and seemed freakishly young for their jobs, I’ll stick with almost any medical drama (though I’m happy to say that I drew the line at New Amsterdam, which takes the trope of Mr Rule-breaking God Doctor to a level that even I can’t tolerate). But, at last, there I was watching the PP episode called ‘In Which We Say Goodbye’, to which the only possible rejoinder is ‘Thank Christ,’ which kicked off with Addison smiling through her tears while talking into a video camera.

It’s impossible to spoil PP, just as it would be impossible to spoil the rotting corpse of Leopold II of Belgium, so I will reveal here that the weeping-into-a-video-camera ‘action’ related to one of two weddings, both of which were held outside, as television weddings so often are, for some unknown reason. (And, by the way, it must be easy to promise to love someone ‘for richer or poorer’ when you’re both medical specialists.) But the primary focus of the final episode, as it is in what feels like every other episode of PP, is the message that if you’re not a parent, you may as well just stop wasting everyone’s time and hang yourself immediately.

The PP characters’ journeys until their belated saying goodbye had a similar trajectory. Addison went from, for example, becoming involved with a married man (which was comparatively interesting), to struggling with fertility (very boring) and then struggling to adopt (even more boring). This last resulted, naturally, in her taking possession of an unusually attractive baby who made strikingly few demands on her, except for obligatory mentions of being ‘spit up on’, and obligatory babysitting crises. We are left in no doubt that, despite being ‘double board certified’, whatever that is, Addison’s life was a vacant lot of pointlessness until she was able to cradle the swaddled babe while sitting on the deck of her large beach house. There is also Violet, neurotic (natch!) psychiatrist, who was vocal about never wanting to have children until she, of course, had one. There is Violet’s husband, alternative medicine specialist Pete (who changed back into a normal doctor once they started setting most of PP at a hospital, presumably to make it more like Grey’s Anatomy) who didn’t want children till he had one, and then made self-righteous speeches at every opportunity about how he was protecting his son. Worst of all, though, was the mutation of Charlotte, hard-bitten hospital administrator, and the only character who I didn’t want to smash to death with a pasta machine. (Well, except for the heavenly ginger cat, Milo, who Addison all too briefly shared her awful beach house with. The internet tells me he got his marching orders because Shonda Rhimes’s daughter was allergic, though I am unclear as to why that should have been an issue — did the kid live on the set?)  Charlotte stayed true to her oft-expressed wish never to have children, even when she was married to relentlessly punchable Cooper, who was employed as a paediatrian despite seeming to be mentally and emotionally younger than his patients, but then, of course, of course, she fell pregnant.

In a novel development, the final episode of PP did at least demonstrate parenting is actual work, with Cooper stuck at home, shower-less and having been ‘spit up on’, but please bear in mind that he and Charlotte were by now the parents of four, three of whom are newborn triplets (the other kid was The Son Cooper Never Knew He Had, a variety of storyline that, to me, is the only one more boring than one about having fertility treatment, wanting to adopt a kid/fighting to keep an adopted kid). But, even with this indication that having all these young children might actually be mildly demanding, Charlotte and Cooper were able to get out of the house to enjoy themselves at the second wedding, and she was still slender, well groomed and generally gorgeous, despite having had, yes, triplets, a matter of months beforehand. In addition, we are supposed to believe that it turned out to be absolutely terrific that Naomi and Sam’s daughter had a baby while she was still in high school; and also that Naomi ended up pregnant to Sam, even though he’d made it clear to Addison (after they’d hooked up for no real reason that I can determine) he didn’t want to have any more children, which was not surprising, given that his existing daughter was, like seemingly all teenage daughters on TV, a rude little cow. Geez, the show missed an opportunity finally to be interesting by flashing forward to one of the PP triplets needing to be rescued from a cult, another marrying Barron Trump, and another shoving Cooper and Charlotte into an old folks home against their will.

The only alternative to the insanely romantic vision of parenting on a show like PP seems to be the narrative that having children means no sleep, no sex, dirty nappies, it’s expensive, it’s stressful, I’m exhausted … but it’s all worth it! But what if it isn’t? In sharp contrast to what I hear on TV, in films and in celebrity interviews, I’ve found it not at all unusual to hear real-life people say they might well not choose parenthood if they had their time over again. So, if actual women and men have the balls to say this, why don’t fictional characters? Yes, there is an enormous number of people who do feel that parenthood is the most significant, rewarding thing they’ve ever done, but the fact that this perspective is the only one that ever gets aired publicly is a messed-up situation, such relentless propaganda leading the suggestible to think that not having children is an actual problem.

The TV show This Is Us is propelled almost entirely by the notion that while being a parent might stop you from doing pretty much anything you ever want to do, it’s all worth it. While I find this program highly enjoyable, I will say that it is increasingly feeling cobbled together in haste, moving unsteadily through short-lived plot developments like a kid on rollerblades who is lost in a maze. TIU is, of course, about the Pearson family and its offshoots, from the nineteen sixties to today, so at least the Wig City aspect is reliably good fun. The parents, Jack and Rebecca, and their children, Kevin, Kate and Randall, undergo various travails, including death by crockpot; alcoholism; drug addiction; weight struggles; panic attacks; not having been able to pursue youthful dreams; and what I can only call chequered employment histories. I wouldn’t give most of these people the time of day, especially the three junior Pearsons, who are screaming babies even, or especially, in the storylines when they’re in their late thirties.

The one character who I care about deeply is Rebecca (in a great performance by the divine Mandy Moore), who had wanted to be a singer until an LA record company honcho told her she was ‘Pittsburgh good’; and who didn’t want children, but then Jack talked her into it. The episode I’d like to see would be about an alternative reality where Rebecca gave Jack the heave-ho and stuck with singing. And yet, even if she’d managed the ultimate feat of becoming the next Joni Mitchell but without experimenting with jazz, synthesisers and having a terrible perm, I don’t doubt we’d still be given to believe she would have been better off stuck at home looking after triplets, two of whom give her grief at every opportunity. And yet, even if Rebecca had married Jack but not had those children, she wouldn’t have been widowed before she was fifty, given that one of them – and the most annoying of the lot, at that – was indirectly responsible for his death. Let’s see This Is Us put to one side all those ill-considered storylines that never go anywhere satisfying and unpack that one.