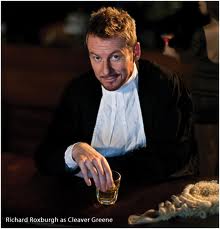 As it is, I now spend so much time watching ensemble dramas on DVD that it has become an exciting novelty for me to watch a television show at the point that it’s actually being screened on the television, making me, ironically, now more behind the times than I was back in ’82, when I had no option but to watch Taurus Rising ‘live’, complete with advertisements for Scorched Peanut Bars and Solo that featured manly men chopping down trees and kayaking. So, now every time I watch a program at the time it is being broadcast, it feels like the equivalent of watching the moon landing in 1969, not that I would have been watching the moon landing, because, I have to be honest, it interests me not at all. In the moments before Rake began, my mind was pleasingly exercised by a voiceover announcing, ‘If you loved Downton Abbey, you’ll love Call the Midwife’. Well, really? Yes, both shows feature olden-time costumes but is there any other connection?  From what I can see, Midwife is mainly concerned with, rather than the always-interesting doings of the landed gentry, women screaming in labour and riding bicycles.

I was unsurprised that Rake commenced with the rake himself – a wastrel criminal barrister, so cue wordplay! – banging a blonde lady in the back of a car. I was, however, surprised to discover that this lady, Claudia Marshall, was the Premier of New South Wales, given that there is, surely, no way such a personage would be stupid enough to have extramarital sex in a public place.  I was even more surprised to see that Toni Collette was playing the role, leading me to wonder about the current unemployment rate for actors in the United States of America. Aside from the show’s focus on scandal among NSW politicians, which really made me, out of the clear blue sky, miss Belinda Neal’s masculine tones, the storyline incorporated something about jihad; anal bleaching, at the mention of which the judge stumbled and said, ‘Thank you, Mr Bleach’, as opposed to ‘Thank you, Mr Greene’, something that I am completely convinced would actually happen; and a drunken clown at a children’s party, with whom Cleaver, naturally, got into a rumble after saucily, and lengthily, arguing that ladies of the right-wing persuasion are superior in the feathers. Roy Billing played the ‘Thank you, Mr Bleach’ judge, which particularly struck me because Billing appeared in Thank God He Met Lizzie, a film that I think is tragically underrated and in which Roxburgh himself played a character whom, in contrast, I did not long to kill in a duel.

When the congress of Cleaver and Claudia is interrupted by the buzzing of her mobile phone, Cleaver, naturally, pontificates on the evils of texting. Now, it’s not that I even particularly disagree with what he had to say, but it’s amazing how much I wanted to disagree with him, given that I just can’t stand him. Aside from the fact that Cleaver is a windy bore, and a pseudo intellecual on the level of Prince Charles, the reason I find him so tiresome is that he’s clearly supposed to be someone whom we, the viewers, love despite ourselves, when it’s the case that I can’t stand him because of myself and my own good taste. And yet, we are expected to swallow the official line that Cleaver isn’t supposed to be likeable, and that Australian television is therefore, yet again, ‘coming of age’. Said Roxburgh, in an interview on the TV Tonight website, ‘I guess he’s really an anti-hero because he never really does anything halfway decent or good, and yet he still appeals to people’, which is, allegedly, because ‘we live in such stringently enforced political correctness that there’s a sense of being entrapped’.

It astonishes me that we, the viewing public, are thought to be stupid enough to believe that this priapic and talkative duffer is intended to be an ‘unlikeable’ character, even though every woman he meets is, it seems, is either secretly dying of love for him or, at least, dying to have sex with him. This wouldn’t bug me so much if it weren’t for the fact that we’re supposed to believe that having him as the lead in a television program is some kind of risky move, even though ‘unlikeability’ in characters is extremely old news on cable television, even in this country. I am currently also rewatching Foxtel’s Love My Way and, while I had sort of forgotten what a massive, relentless downer it is, even though almost everyone in it has, regardless of occupation, has somehow scored a residence that has sweeping harbour views, I respect and appreciate the fact that every character in it is, at least sometimes and frequently often, genuinely and confrontingly ‘unlikeable’, and in the manner of an actual human being. It is quite something in the time of, the bizarrely critically lauded (at least once it became clear that they were rating handsomely), Packed to the Rafters and House Husbands to see a program in which someone will admit to their spouse that they would just as soon their baby hadn’t been born, or in which the boyfriend of a woman whose daughter has just died ends their relationship because, he confesses, he now hates being around her.

And the most aggravating thing of all for me with Rake is that Cleaver is one of those characters the dislike of whom is supposed to be a badge of excessive political correctness. In fact, it’s just that I don’t enjoy seeing and hearing someone blathering on tediously, especially if they’re going to say things like ‘Those who do not learn from history are doomed to repeat it’, as if on the day they were born they really won the old Originality Of Thought Lottery. Listening to Cleaver talk is like, I imagine, being stuck at one of those dinner parties at which Richard Burton would declaim Shakespeare and bore everybody to death. One of the more annoying things about being a woman is that I could be seen not to enjoy a character like Cleaver Greene because I’m some kind of humourless zealot or, worse, that my dislike for him is covering up a secret violent attraction to his kind, as with Nurse Kennedy and Doctor Forrrest in The Young Doctors. It is, after all, possible to dislike someone merely because they are a complete fuckhead. Rake nettles me in the same way as did a recent piece in the Fairfax press by Martin McKenzie-Murray about Christopher Hitchens, which urged that Hitchens not be ignored due to ‘strident feminist or political opposition’ that, to McKenzie-Murray, that ‘reeks of the worst elements of political correctness’. Well, considering that there is less danger, at least while Martin Amis is alive, of Hitchens being ignored than there is of Mondo Rock’s ‘Summer of ’81’ once again riding high on the charts, I really think that McKenzie-Murray can stop worrying.

Also on the topic of male characters who are feckless, yet attractive to women, I went to see the film Your Sister’s Sister. I personally enjoy almost-plotless works about sibling conflict and this one did not let me down, but I wish to make a few points. First, I like Emily Blunt enormously but I really wish that she would damn well buckle down and master an American accent – if Julian McMahon can do it, surely she can! Second, it will be a tragedy if Rosemarie DeWitt never gets to portray Christine Lahti or, at least, play someone related to her. Third, it will also be a tragedy if Mark Duplass doesn’t at some point have his hair shorn into a bowl cut and portray Brian Wilson in the Pet Sounds era.

However, getting back to Rake and the thrills to be had from watching television as it is actually broadcast, I was amazed when, at the end of the show, it was announced that viewers of Rake could win lunch with Richard Roxburgh. Now, if I were to win lunch with, say, John Cusack, I’d essentially want to be winning lunch not so much with the Noam-Chomsky-reading, Bob-Dylan-listening Cusack himself but with Walter ‘Gib’ Gibson from The Sure Thing. This particular contestant winner would, I have to say, be better off lunching with Roxburgh as Roger Rogerson than they would with Roxburgh as Cleaver Greene; at least ‘the Dodger’ seems to be, if nothing else, succinct and unpretentious in his manner of talking.