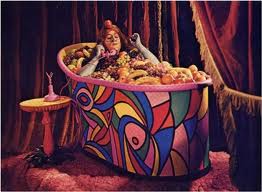 This really IS a great lifestyle

Imagine my considerable surprise when I received an email from a producer at Channel Ten’s The Project, asking if I would be part of a story about women who are, as they say, ‘childless by choice’. The fact is, naturally, that the lure of being on television meant she could have requested I be part of a story that required me to read and discuss both of Ethan Hawke’s novels and I would have agreed to what she was suggesting in the time it takes me to become enraged whenever I am reminded of the critical and commercial success of House Husbands.

Back when I actually was what I now do not have – namely, a child – having anything to do with being on television did epitomise excitement but, more than this, it epitomised the kind of coziness implicit in a winter schoolday spent lying on the chaise lounge in front of The Mike Walsh Show, while consuming Butter-Menthols as though they were candy. One of the happiest days of my young life was the one in the late nineteen seventies on which my mother and I went to the Channel Seven studios to witness my sister’s appearance on It’s Academic. I loved how dark the studio was, and how far removed it felt from the – to me, as probably to all children – petty and dull concerns of a child’s everyday life. As I got older, and continued to spend as much of the school holidays in front of the box as I could, I was dying to grow to womanhood and assume Barbie Rogers’ place on the panel of Beauty and the Beast (there were two versions of this program on the air in 1982, one with John Laws and one with Derryn Hinch in a beastly capacity, which must surely have been due somehow to the non-existence of the information superhighway). For the majority of children, life is not merely boredom then fear, as Philip Larkin – an individual who had the look of a nerd but was in reality something of a swinger – had it, but boredom and fear simultaneously, given that you are constantly being fed information and instructions in which you are not interested; and given that you have to mix with a lot of other children who have the same gift for kindliness as did Vlad the Impaler; and given that those in charge of you, such as kindergarten teachers, are suffering dissatisfactions beyond your knowledge or experience, which will be taken out on your one way or another. Therefore, for the unhappy child, which is pretty much all children, except for mutants who enjoy group activity, television is, or was in the nineteen seventies and eighties, the closest they are going to get to one of those excellent lands spinning around at the top of the Faraway Tree. With television, unlike the movies, no one needs to take you to it; and, unlike reading, nothing is being asked of you. Television was the one place where a child could feel that everything was being done for their pleasure; to me, it is a mark of what a great show the educationally intended Sesame Street was that I learned nothing from it whatsoever. When you are a child, it, of course, never crosses your mind that appearing on television would ever mean feeling nervous, given that the act of watching television is one of the few times that you don’t feel nervous. However, as I am now old enough to understand the idea of lifelong consequences, the prospect of an appearance on television primarily represented the biggest opportunity that a nobody like me is ever going to have to look like an idiot.

The concept of the Project story was that it would feature one woman, in her twenties, who has decided she doesn’t want to have children, and is getting a passel of grief about it; and a woman in later life who has not had children and has, in the words of Noeline Donaher, no regrets. Given that the last time I was at the peak of my fertility, Blame It on the Bellboy was having its cinema run, there are no prizes for guessing which of these roles would be my own. When the day came for me to do my interview, it was in the midst of the most recent Melbourne heatwave and my apartment has no airconditioning, which meant that I ended up looking like John Meillon as Sir John Kerr in The Dismisal. Nonetheless, the people from The Project were very nice, and the interview seemed to go all right, except for when I had to talk about all the thrilling ways that I fill my childless life and I inwardly panicked while realising anew that I hardly ever go anywhere or do anything, meaning that I would not be able to offer them photographs of myself hiking in Nepal or seeking refreshment in a German beer garden.

When I came to watch the episode in question, it was, to my alarm, top heavy with stories about really selfless humans, including a man who had, I think, saved a stranger from drowning, which stood in raging contrast with the footage of me, on my own, ordering and drinking coffee, or leafing through magazines while wearing an extremely unpleasant facial expression. (I was, entirely accurately, described on Twitter as looking ‘angry and miserable’). At the end, Steve Price insulted the other lady and me, by comparing us to one Sebastian Vettel. Now, as I do not follow sport, the allusion was lost on me at the time but it appears he is a racing driver who did something or other to his teammates. I didn’t care, though, as I was, in fact, flattered by having one famous person publicly compare me to another famous person, even if they are not as famous as I would like, unlike, say, if Pink had compared me to Adolf Hitler.

Now, I couldn’t – not that I wanted to, mind you – find any fault with the story. I would say, though, that its tone was a little more sombre than I was expecting. For example, I was asked at one point what the worst thing is about not having children and I had replied that it is the way that whenever any friend has their first child, I cannot help thinking that another one has bitten the dust, given that friends who are childless and who therefore still care strongly about, for example, what is on the B side of a particular Icehouse single, are rare once you are over the age of thirty. What I’d meant by that was that I find that aspect to be the worst thing about not having children and that it’s not even a particularly bad worst thing. The impression even I got from watching the story, however, was that my life is a wasteland of other people getting pregnant and drifting away, while I stand in gloomy shadow, screaming away, like Edith in Picnic at Hanging Rock.

The point I had really wanted to make, though, was that – and, yes, I appreciate that I have made this point previously, assuming anybody cares – I feel it is an under-represented truth that for a lot of people who haven’t had children, this fact is neither a joy nor is it a sorrow. That is, the childless population of the world is not composed entirely of people who have made an actual decision not to have children, or of people who desperately want children and can’t. Rather, it is entirely possible to end up not having children and not be bothered about it one way or the other. What actually ticks me off is all the paranoia-inducing articles about biological clocks, and such nonsense, leading women, at a time in history that they no longer have to spend most of their lives doing housework and devoting their lives to others, actually to panic that they will be deprived of the opportunity to spend most of their lives doing housework and devoting their lives to others, and that so many women, given the ongoing mania of women in general to fuck themselves over, believe all this hooey and, worst of all, write dopey books on the subject, which then lead to opinion pieces.

So, I am only sorry that I didn’t do a better job of making my life look like the old Imperial Leather advertisement (without, of course, the children), given that I can well imagine that footage of me sulkily reading a magazine would not exactly represent the good life to most people. However, the usual clichés such that if you don’t have children you can take overseas trips with ease, or that you can accomplish more in your career (I, for one, have barely accomplished anything in my career, unlike, now I come to think of it, everyone I know who has children) are not the point; rather, it’s that whether you have children or not, your life is going to be spent dealing with quantities of annoying horseshit and you will also have many moments of exquisite pleasure. To my mind, one of the most reliable sources of happiness we have is the fact that it is impossible to guarantee a happy or an unhappy life for yourself either by having children or by not having children, which means that, actually, we all win.