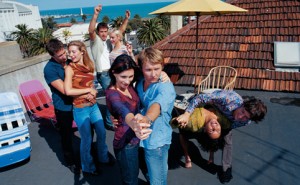 The old gang on that dopey rooftop

Amazingly, I did not take to The Secret Life of Us immediately. What happened was that I visited Melbourne in 2002 and had a grand old time, meaning that when I returned to Sydney, I felt a longing to watch anything at all that was set in the Victorian capital – and this was a potentially dangerous longing, given that it had once also led me to rent Love and Other Catastrophes. More benignly, though, on this occasion I flicked the switch to Channel Ten, knowing that SLOU could give me what I needed. It did and, furthermore, I happened to alight upon an episode from the ball-rippingly great second season, ensuring I became a raging addict for the remainder of the time the show was on air, and meaning I was still hanging around during the airing of its fourth and final season, like a person dawdling as they exit a blazing inferno. When I recently felt a craving again to watch SLOU, I was initially not going to bother with season four, as I remembered it being perhaps the poorest final season of a television program I had ever seen. However, I succumbed to the notion that, first, I would not be doing the job properly if I didn’t watch it; and, second, that I should try to work out for myself what the hell happened, given that the series four of SLOU has unfailingly caused me to get upset whenever I’ve thought about it.

SLOU originally, of course, revolved around certain individuals living in a block of flats in Acland Street, St Kilda, although the rooftop on which so much of the action took place was, aggravatingly, clearly not part of the same building, as the view from it of the Palais, and, I think, Luna Park’s big old face, showed that this was geographically impossible. Below, in order to get you in the mood, are the opening credits from the first series.

There was Alex (Claudia Karvan), a doctor who was – thankfully, given her occupation – generally responsible and self controlled, and who shared an apartment with Evan (Samuel Johnson) a chaotic, philandering young writer; and with Kelly (Deborah Mailman), who pursued several different career paths without notable success, except for, strangely, her university studies in psychology. I say ‘strangely’ because this was someone who panicked about assembling a bibliography, when, it seems to me, all she needed to do was command the computer to organise the entries alphabetically. Alex was best friends with Gab (Sibylla Budd), an extrovert who had some sort of job with a politician, and then worked for a union, after which she ran for political office herself. Gab was married to Jason (the magnificently named Damian de Montemas), a legal aid lawyer who ended up working for The Man or, as it is also known, accepting an offer of employment in corporate law. The third household of note was composed of Miranda (Abi Tucker), an actor; her boyfriend, Richie (Spencer McLaren), a more successful actor; and Richie’s best friend, Will (Joel Edgerton), who was a builder’s labourer, thus giving Edgerton the opportunity to outbloke even Edgerton. They spent a lot of time chatting to Simon (David Tredinnick) the barman at their local, who had the surname of ‘Trader’, which, considering he was gay, seems unfortunate. Even as early as season two, these characters began to drop away, but they were the bones of the series; and, as always seems to happen with ensemble shows, no matter the equality of everyone’s screen time, two characters, Alex and Evan, felt like the real leads.

Of course, given that life on television is a billion times more interesting than life as it is lived, quantities of things happened to these people and to those in their orbit. To name only the incidents that come immediately to mind, Alex had an affair with Jason, had an abortion (though one unconnected with Jason), and had to deal with crusty old surgeons. Evan published two novels, the hideously titled Fitzroy Street Kisses and Sometimes Life – the first of which was launched by Dave Hughes, as himself; and, we are given to believe, was reviewed on the front page of the London Times – and had the experience of a furious ex girlfriend pouring fish sauce over his belongings. Kelly was dumped by a Jewish man for not being Jewish, and became involved in pyramid selling; Gab got divorced from Jason (whom she’d married while he was involved with Alex) and had an affair with her married boss; Jason caused a woman he barely knew to become pregnant and then banged on all the time about the glories of fatherhood; Richie realised he was gay and, unconnected to this, became too big for his boots, which caused him, after having appeared on Rove Live, to lose his regular part in a soap opera; Miranda produced and starred in a one-woman play about anorexia nervosa, and became a lesbian; and Will was late to meet his girlfriend one night, causing her to be killed in a hit-and-run accident. For years, the storyliners rarely put a foot wrong, with the exception of once seeing fit to include characters attending my personal bete noir, a laughter workshop.

By series four of SLOU, however, almost all of these people had left. Still standing was, first, Evan, whose hair was, mysteriously, several shades darker than it had been. He made an early exit by, in a two-pronged display of unlikeliness, deciding to cohabit with the fish-sauce-throwing girlfriend, and moving to Fitzroy, despite having previously railed against this suburb after having seen one of his works in a ‘priced to clear’ bin in a Brunswick Street bookshop. The second person still standing was Kelly. All I can say to that is that, in the same way that INXS should have begun anew with a new singer after the death of Hutchence, the makers of SLOU should have put their show to sleep and tried thinking in terms of the excellent Rhoda: namely, of a let’s-call-it-what-it-is spin-off. (Yes, Simon was also still hanging around but he was always more of a repository of confidences than one of the big cheeses.)

Now, I must admit that, while season four never reaches the heights of the previous series, I did not find it to be nearly as bad as I remembered. Sadly, though, this final series did terrible damage to itself in its first episode. Its initial insult to the viewer was that almost all the old characters have disappeared with no explanation whatsoever, as though we would just have forgotten about them; this showed the same heartlessness as that exhibited by those people who think a deceased pet can, and should, be immediately replaced. And talk of pets leads me to the episode’s other devastating problem.

The new household to which we are introduced are the occupants of, I think, the flat that was previously Gab’s. They are the Alex-ish (ie repressed) Lucy (Alexandra Schepisi); her brother, the Evan-ish (ie womanising) Adam (Nicholas Coghlan); her best friend, the Gabs-ish (ie open-minded) Nikki (Anna Torv); and Lucy’s ginger cat, Orlando. I’ve got to tell you, it would have been awesome to see this feline’s visage in one of the opening-credits face slivers. Unfortunately, though, he turns out to be the problem, not the solution, with much of the first episode concerning fights over his catlike habits of moulting and having fleas, and his tendency to enter Evan and Kelly’s apartment uninvited. (Yes, at one stage there is also an explanation of the painting Guernica but I simply cannot be bothered discussing it.) Aside from the question of how does Orlando manage to go his lawless way when there is apparently no cat door, inter-flat warfare about his movements and about the communal washing machine, is a big, and not a positive, change of direction from Alex having sex with Jason on the rooftop in the pilot episode. Then, to add injury to injury, the ‘To be continued’ at the end of the episode is based around Evan and company accidentally running over, and killing, Orlando. Well, if you are a cat lover, as am I, this is horrible to see; and if you are not a cat lover, it is, I imagine, just tremendously uninteresting.

As indicated, however, series four does improve, containing as it does the customary career crises and inappropriate sexual couplings, but all the new personnel continue to feel slightly off. I got to the point that I would have given much to see again even those people – such as Chloe, Miranda’s boringly head-screwed-on lover – I had once considered to be unwelcome ring-ins. A character such as Stu (Stephen Curry), a pleasant-natured country boy who sees fit, on occasion, to team a beanie with a necklace, simply does not cut the mustard. (As well, he lives in Miranda’s old flat, so why is it still decorated the way it was when she lived there, giving it a Mary Celeste eeriness?) And this discomfort with the new characters of an old hand like me isn’t the fault of the actors, or even, really, the characters themselves; rather, it comes down to resentment that SLOU’s creators are trying to get away with an evil Incredible 2-Headed Transplant-style experiment.

That is to say, just imagine any ensemble television show you are keen on but without any of the original characters except for one major and one tangential one. Consider, for example, Beverly Hills 90210 with only Steve Sanders and Nate from The Peach Pit (of course, it’s possible that this was actually the case by the time 90210 finished its run). And then, as a last affront, the final two episodes of SLOU are a ‘Best of’ mess of excerpts, which Mailman, naturally, presented and during the course of her hosting duties uttered such statements as ‘The grass is always greener’ and ‘Don’t get your pork where you get your bread’.

Having said all this, though, there is one way in which this wicked character-shuffling works, and that is by giving SLOU a genuine melancholy that may not have been achievable through other means, such as actual plots. By the time the gang – such as it is – heads off to Lorne towards the end of the show, the weather is appropriately autumnal after SLOU’s people having existed for so long in a blaze of improbable sunshine (those who lived in Melbourne in those days always tell me that this was due to the drought) and the grey skies and jumpers suit the viewer’s mood. This is because while the unexplained absence of almost all SLOU’s major characters continues to be offensive, it is, sadly, a reminder of the way that real life throws so many people in one’s way and then grabs them back. Although they are rarely, if ever, mentioned in the final season, the absence of Alex, Evan, Gab, Jason, Richie, Miranda and Will haunts that block of flats and its latter-day inhabitants as powerfully as the absence of ex-girlfriends or boyfriends, ex-spouses, ex-colleagues, ex-flatmates or ex-friends can weigh on us all.

So, on that gloomy may-old-acquaintance-be-forgot note, a very happy Christmas and New Year to anyone who is kind enough to have read this far and to have visited Imagined Slights in 2012! And, incidentally, I just did a ‘Which Secret Life of Us character are you?’ Internet quiz that revealed I am Evan, so a very happy Christmas to me!