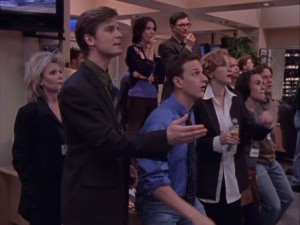 I just finished watching both series of the from-the-hand-of-Aaron-Sorkin television show Sports Night – yes, Mama, all forty-five episodes. Usually, it would sadden me to put my dowdy boot into a program that rated poorly when it was originally aired but I’m more than willing to so on this occasion, because it’s my impression that many people think well of Night, and are full of hate that it was cancelled relatively soon, after two seasons, although this is only one less than was granted both to Batman and Gilligan’s Island. Now, part of the reason that I, frankly, detest Sorkin, not as a person but as a cultural force, is that he makes me feel out of step not merely with the humanity I fancy I can disregard (namely, anyone who has ever admired the middle-brow horror The House of Eliott). There are several humans I like and respect – or, if not like, at least respect; or, if not respect, at least like – who are admirers of The West Wing and in whose eyes I am lesser because I am not also an admirer. And yet, I know that I’m always going to torment myself with Sorkin product, simply because he is a man who loves a backstage drama, as do I. It is this simple truth that caused me to sit through all of Night, all of Studio 60 on the Sunset Strip and a portion of the first season of The Wing, and that will, no doubt, see me counting down the days until The Newsroom is available to me, none of which will stop me from now launching a verbose and fierce attack on their creator. This is despite the fact that I do actually prefer to praise, rather than bury, only because when I’m burying, and so being forced to think about things that aggravate me, my heart beats loud and fast, the way it did back in the days that I used to drink V and the sound of a ringing telephone would make me cry. However, every now again, I must get my fury out on the ‘page’, if I’m not to die of it, and nine hundred or so minutes of Night is definitely such an occasion.

There is simply so much to annoy even the casual viewer of the Sorkin oeuvre, although I must admit to having thoroughly enjoyed Studio 60, a show that is, rightly, widely despised for its complete lack of veracity, and hilarious levels of pretension and pomposity, but it is usually fairly easy not to hate a program that is already getting beaten up on the playground. In any case, the first overwhelmingly annoying thing about Sorkin’s shows is their air of insufferable self-importance that they are really saying something about something, even though these programs exist on such a plane of fantasy that they make H.R. Pufnstuf look like The Wire. I really wanted to enjoy The Wing, as it has almost everything I like in a show – namely, good-looking people labouring in a stressful, yet glamorous, occupation; and who are, ideally, doing so in the present day, because I tend to get tired of shots of vintage cars. What’s more, I’d handed over my pesos at the video store in order to see The Wing and, through opting not to continue with it, let them go to waste, something that I don’t believe I have ever occur happen before. What finally broke me was a scene in which a choir of little children came and sang at the White House, but there was so much more not to be able to stand, primarily the wonderful guy-ness of President Bartlet (who else but Martin Sheen?), which extends to his terrific marriage. I kept thinking that this was going to be a set-up for Caligula-style depravity and corruption, but there was no sign of them when I ceased my viewing. Bartlet’s wonderfulness is also drawn in heavy crayon when we see him granting a job to a young black man, Charlie (Dulé Hill), and his having no problem with this minion dating his, wonderful, daughter, Zoey (Elisabeth Moss). Now, given that I’m not a Klan member, and except for the fact I think Charlie could have done much better for himself in both of these regards, I’m one hundred per cent behind him both being given a job and dating the Prez’s daughter, except for the fact that it all seemed monumentally patronising and self-congratulatory, as in the especially hateful episode of Night in which one of the leads, sportscaster Dan Rydell (Josh Charles), converses with a homeless black man, and even lets him stay in the building, at least till the end of the episode.

The biggest thing that I can’t stand about the Sorkin body of work, however, is his crazed conception of the workplace, featuring people who, even though they work in, say, television and so, presumably, live in unrelieved fear of getting fired, constantly stick it to The Man, and who ‘have each other’s back’. The thing is that any workplace whatsoever is a festival of backbiting and backstabbing, and, generally, a hotbed of treachery. This is the Darwinian result of the fact that any human, even if they genuinely like their colleagues, wants, at all times, to ensure, first, that their arses are as covered as the most covered of covered wagons; and, second, that, hopefully, all of their colleagues are somehow doing worse, in every way, than they are. This is the case even if a person is, for example, employed on a casual basis at an ice-cream parlour, so I find it almost impossible to conceive the degree to which this would apply in the kinds of workplaces about which Sorkin usually writes – namely, those in the entertainment business and politics.

Put simply, Night is claw-the-skin-off-my-own-face irritating, although still not quite as irritating as The West Wing, if only because it feels a scintilla less fantastical, as it is, at least, not about the doings of the White House, a place that would, surely, be unsurpassed, anywhere, for arse-covering and perfidy. Nonetheless, I just couldn’t stand the way everyone working on the show within the show, also called Sports Night, really had a great love for each other, and I got amazingly sick and tired of everybody efficiently charging around the studio, or sitting at desks in headsets, barking things that sounded like ‘Give me a 120 530 over the 210!’. Every time a person, caringly, said ‘Have a good show’, or ‘Good show, everybody’, which was an every-episode nightmare, I wanted to seize an olden-time heavy iron and smash it over someone’s – anyone’s – head. And then there is the infuriating manner in which all the characters speak, rat-a-tat, back and forth, as though repeating what someone else says to you is not merely witty but evidence of the most razor-sharp of intellects being possessed by both its speakers and its writer. To be honest, I can’t recall if I wrote the following exchange myself, in an effort at parody, or if I lifted it directly from an episode. Nonetheless, it demonstrates the loathsome pattern into which all Night speech is formed, in a manner that never has been, and never will be, uttered by any actual human:

We have to write it.

Then we’ll write it.

My hate for the Sorkin suite is perhaps best enscapulated by an episode of Night in which associate producer, and this particular show’s ultimate Sorkin Jewish man, Jeremy (Joshua Malina – who was seemingly born to play, and has played, such roles as ‘Calculator Kid #3’, ‘Egghead Announcer’ and ‘Global Credit Receptionist’) is making eggnog in the offices of the show. He is doing this because he is going to the home of his girlfriend, senior associate producer Natalie (Sabrina Lloyd, a stunner who, I firmly believe, should have played the lead in The Mystery of Natalie Wood), who is, of course, one of those he-and-she-are-so-different-she-may-as-well-live-across-the-Rubicon! shiksas. It’s supposed to be funny and endearing that Jeremy is making this eggnog even though it’s Easter not Christmas. However, it is unfunny, contrived and monumentally irritating, because first, Jeremy is supposed to be massively intelligent and well informed about trivia, and so would, one would think, realise that eggnog is drunk at Christmas, at least if he’s ever been to the damn movies; and, second, who in the name of Christ would make eggnog at work? I’m a big old goy and I can’t believe that anybody even makes it at home.

I do appreciate the fact that Sorkin writes scripts that feature words of more than two syllables and that he is, generally, aiming to make programs that are not stupid. On the other hand, there are so many ways in which I would prefer to watch something that is just honestly stupid. Speaking of which, the announcement of Channel Ten’s latest slate of shows struck me forcibly, given that I’ve just had the pleasure of watching the DVD of Network 10’s 1980 series Water Under the Bridge. I find it extremely difficult to imagine anyone these days, even the ABC and let alone Channel Ten, making a lengthy, very faithful and leisurely paced adaptation of a Sumner Locke Elliott novel, particularly sans any insertion of the whipping out of knockers or the songs of Mental As Anything to give it more ‘relevance’ to the present day.

To my mind, there’s a lot of excellent acting in Bridge, especially Robyn Nevin’s divine portrayal of sandpaper-tongued ex chorus girl Shasta Davies, but, as I watched, I was silently handing out particular kudos to Jan Hamilton for her depiction of tragically thwarted ‘old maid’ in embryo Geraldine Flagg. Bridge was Hamilton’s only credit, according to the IMDb, but when I sleuthishly did a spot of Internet research and managed to find further information on someone who appears to be she, I discovered that not only was this woman who is, apparently, the same Jan Hamilton dumped as the lead in My Brilliant Career – which must have made for awkwardness on the set of Bridge, which also starred Judy Davis – she helped to found a cult, into which she would lure people through invitations to clowning classes and, furthermore, she spelled ‘clowning’ with a ‘k’. Still, amazing though all this is, it is more believable than the concept that someone would whip up a batch of eggnog at their place of employment.

8 Responses to “Baulkin’ at Sorkin”