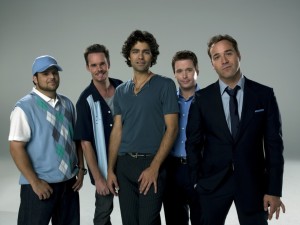 What the f..k is Turtle wearing?

As I am having a general – and, to be honest, borderline incoherent – ‘rap’ about fame, yes, certainly, I could start off quoting from the David Bowie song but that’s always a horrible thing to do (and in the wake of his, very upsetting, death, I’ve also stayed away from writing think pieces on how he made me the incredible person I am today, and, out of respect, am making no reference to his whipped-margarine hair of 1983). But if I am not going to quote the lyrics of ‘Fame’ and I want to chuck around some nice obvious references, I am left with the film Almost Famous, featuring Penny Lane, the most annoying groupie, and, in fact, one of the most annoying characters, of all time; and the observation that I would defy anyone, man or beast, to get no enjoyment at all from ‘Hot Lunch Jam’, from the original motion picture – not the remake, or television series – of Fame. Or one could contemplate the cautionary example of filmmaker–slash–musician Troy Duffy, as seen in riveting documenary Overnight, playing electric guitar while wearing dungarees and no shirt, and wasting no time in proving himself to be the worst human being who has ever lived. But, if you want to get all ‘present day’ about it, and with the proviso that I barely know any young people, I’ve noticed that they are often ragged on for ‘just wanting to be famous’. But surely that type of wanting is no more a new thing than pompous ranting about the younger generation is a new thing, though in my day it was all Family Ties-inspired op eds about how the kids cared only about making money, rather than protesting about Vietnam, blah-dy blah-blah, and accompanied by photos of twenty-year-olds who were studying commerce and looked like Nick Bufalo in A Country Practice.

I am happy to admit that when I was a pubescent, I was determined to be the most famous person in the world, and to do so in the entertainment field, undaunted by the fact that I had no discernable talents beyond quickly learning the lyrics to soundtrack albums, which, by the way, is an easy feat to accomplish when you never do your homework and so have a lot of time to spare. This lust for fame did have certain consequences. First of all, I auditioned for the Sydney production of Annie in 1979, and, yes, I was unsuccessful, but at least I squawked a song from The Boy Friend, instead of, like everyone else did, brassily belting out ‘Tomorrow’. Two years later, I entered the City of Sydney Eisteddfod, and, at age twelve, strode the stage with a cigarette holder, pretending to be a sophisticated director of a London casting agency. When this exertion was over and I could relax, I watched my competition perform extracts from plays like Sunday Costs Five Pesos that are quite simply never seen on the professional stage, and screamed with laughter at how one girl had brought a vanful of heavy antique furniture to set the stage for her five-minute monologue from something with the name of Call It a Day, and at a girl who was a poppy in The Wizard of Oz having to sidle offstage on her knees when her petal headdress started to slip. In fact, it was one of the greatest days I’ve ever had, and I would attend school eisteddfods to this day if it wouldn’t make look like a screaming paedo. The point, though, is that I wanted to be famous and did not want to work over-hard to achieve it, and, naturally, longed to follow in the steps of the women in The Human League, who were famously talent-spotted while dancing at Sheffield’s Crazy Daisy Nightclub, despite having no talent for dancing, or for singing, for that matter.

At that age, I had no idea how much being a famous entertainer was likely to involve trying to avoid having my money embezzled by accountants, and having people I don’t know wanting to talk to me, and also how busy I would be actually doing stuff. All I knew was that I’d get to leave school, and hopefully not just act but also be in a band, or somehow get to perform in music videos, which I thought were filmed all in one big fun go, not in boring bits and pieces. Due to the necessity of earning a living, my ambitions became more modest, and with maturity came some kind of grasp of the idea that there are things about being famous that would be a massive drag, but I still find it totally understandable that people want to be famous, and especially to be famous for being famous (which is a nonsensical term, as everyone who’s famous is famous for something). I’ve never forgotten (though, full disclosure, I never forgot it because I’d taped it off Entertainment Tonight and watched it all the time) John Cusack saying, in a 1990 interview to promote The Grifters, in answer to a question about the benefits of fame: ‘People give you free stuff; you get in for places free – that would be about it.’ Yes, he seemed convincingly world weary at the grand old age of twenty-three, but he was, essentially, arguing against his own implied thesis, as who doesn’t want to be given free stuff and get in places for free? Even if that’s all there is, isn’t that enough?

And speaking of being famous and therefore given free stuff and getting in places for free, my mind has been greatly exercised by finally seeing the Entourage movie, which I’m pretty sure is empirically the most terrible film of all time. Now, I enjoyed the television series, very much at its peaks (series two, three and four), and even to a small degree at its troughs (series eight, though the troughs are increasingly in sight in series five, six and seven). And the reason why the television series was such good fun, at least in its earlier days, was that movie star Vince Chase and his hangers-on were, I believe, basically set up to be dopes; the creators skilfully hit the balance between the show working on an aspirational level (these fools do almost nothing all day, it’s always sunny, and wherever they go, even just to an office or for a walk down the street, hot chicks are tottering around in the background!) but also having the men at its centre being largely a pack of buffoons, thus stopping – if only as far as I’m concerned – the whole thing from being an offensively sexist smug-fest. Vince himself was a cypher; his ‘chauffeur’, Turtle, a laughable bludger; and Vince’s half-brother, Johnny Drama, a wholly ludicrous failure at everything. The only character with any dignity was E, Vince’s under-qualified childhood-friend manager. Yes, E was boring, but, in the early days anyway, he was passably sympathetic and, presumably, the character who had been thrust in to the mix to keep the merry band of rooters, or would-be rooters, ‘likeable’ and ‘relatable’. Then, of course, there was perma-screeching mega agent Ari Gold to add a bit of hot sauce and keep the show’s fans hanging on to the vanilla end. And I say vanilla because, as the show continued to what felt like series one hundred and fifty, we were forced to sit through, to name only the worst offences, Turtle becoming a trim businessman; tedious midget E fighting off scores of attractive women (the only convincing propaganda I have ever seen that there must, in fact be a ‘man shortage); and Ari (perhaps not coincidentally coinciding with Jeremy Piven’s being widely pilloried for the ‘ Sushi-gate’ affair) getting increasingly Mr Family Man, with an increasing emphasis on the wholly ludicrous idea that this crafty, proudly amoral individual never cheated on his wife (reminding me of how – and due, I am sure, to Bruce Willis’s towering ego and general idiocy – David Addison in Moonlighting went from being a sleazy gumshoe to being a human who seemed about to be short-listed for a global humanitarian award at any moment).

So, yes, what was wrought on the final seasons of the Entourage television series was bad enough, but it is as though by the time the movie was made, the Entourage creators had never seen their own show, so forcing the audience to sit through the cinematic equivalent of all the whole Chase gang taking it in turns to be the, equally repellent, James Cameron taking the stage at the Oscars to announce that he is the king of the world for having made that towering pile of shit Titanic. I’d warn of spoilers ahead, but the Entourage movie has almost no plot to spoil, so, suffice it to say that Vince is banging a lot of hot tamales and is all set for a stellar career as a director (much like Warren Beatty in 1981 if, that is, a neurosurgeon were to open Beatty’s skull only to find it entirely empty); the still-slender Turtle lives in a really big house; Drama is finally going to be a successful actor; and Eric gets back together with the ravishing Sloan, who is now bearing his child. Furthermore, they get back together even though the two of them broke up because he had had sex with her stepmother (and even though, as she is being wheeled into the labour room in excruciating pain, E, in a manly way, basically tells her just to get over his transgression, thus deserving to have his own penis served up to him in a hotdog bun).

Still, abysmal from start to finish though the Entourage movie is, is it in any way surprising that most people in the western world would want their lives to be that way? Even I want my life to be like that of the men in Entourage, and I’m a middle-aged woman. But, putting that to one side, there’s no reason to get bent out of shape about young people wanting to be famous, because the likelihood is that they won’t be; even getting on a reality-television show is highly competitive, after all, and if it’s remotely accurate that so many young people want only to be famous, the competition will become fiercer than ever. As with those who fret that their daughters will want to be models, you may as well worry about your five-year-old wanting to grow up to be a horse. Too, it doesn’t follow that if young people didn’t want to be famous, they’d all be hunched over in labs curing cancer, given that most of them are complete halfwits, just as my generation of young people were complete halfwits. And if any of them were to cure cancer, they’d end up being famous, wouldn’t they? Fame really only has a downside for the people who actually have it, so all the very best to people who want it, I say. Besides, if no one wanted to be famous, just think how bored the rest of us would be, given that pretty much nothing interesting would ever happen again.