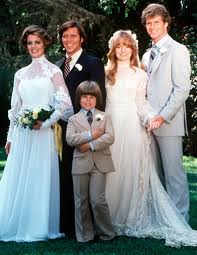 Eight is Enough to have double weddings!

The good lord knows I have written before on the topic of human beings becoming, or not becoming, parents. Well, no doubt part of the reason I’m repeating myself at this time is that I don’t, of course, have any children, and one thing that must be said in favour of having children is that they are an ongoing source of material – just look at ‘newspaperman’ Thomas Braden, with his creation Eight is Enough, and its incarnation both in book form and in that most rocking of television shows, which, not incidentally, taught me all that I know about the town of Sacramento. Yes, in one way, of course I would have preferred Braden to have been scribbling on the topic of his ‘open marriage’ but, in another, it fascinates me that his actual children had the same first names as did Eight’s Bradford clan. I wonder if the young Bradens swapped condolences, or fired off bitchy comments arising from savage envy, regarding which actors portrayed them in the television show; whether, say, Nicholas, objected to being played by the perpetually tiny Adam Rich. If as a child I’d been portrayed in a television show, my dream would have been for the producers to have accelerated my biological age and cast Anne-Louise Lambert in the part, as I was such a very big fan of hers when she played Peggy ‘The Iceberg’ Richardson in Class of ’75.

The reason why parenting is such an evergreen topic for me is that, thanks to newspapers having to fill weekend supplements, and to the fact that the Internet exists, it is one that, like so many other topics, now receives an unprecedented level of attention. Back in the Seven Little Australians days, becoming a mother was, as everyone knows, a simple – or, of course, not simple at all – matter of hoping, frequently again hope, that one didn’t die in childbirth. As is well documented, even as recently as the part of last century prior to the advent of ‘Swinging London’, becoming parents was just what people did, assuming that they were having sexual intercourse and that there were no physical barriers to them conceiving. Now, however, as reliable contraception has made it so much easier not to have children, any articles that are either specifically about parenting, or even that refer to it in passing, are divided into the following themes: first, that yes, there are challenges, including sleeplessness and ‘struggling-with-work-life-balance’, but that being a parent is totally the greatest thing in the entire world; second, that there are those among us who are dealing with the ‘tragedy’ of childishness, either due to physical problems, or to there being a shortage of men who are not sufficiently like the dad in My Three Sons, or to women being focused on their careers and on having a really awesome time, and, we are led to believe, confusing their own fertility with that of the great Geena Davis, and ending up depressed, alone and angry; or, third, that some individuals make a conscious decision never to have children, whatever happens, even if they should be fortunate enough to end up going out with someone they can actually stand. I would hazard, though, that, in contrast to all of the above, many people just happen to end up not having children and also not really giving a damn. Speaking for myself, of course I give a bit of a damn, as you do when you’re not participating in a practice that is so significant and widespread, but I don’t give a damn in the way I do when an aspect of my life is actually going demonstrably poorly – for example, were I to find myself ever again having access to only one, faulty, television and chainsmoking Peter Jacksons. Similarly, the fact that I don’t want a wedding doesn’t mean I don’t feel a pang that I will never have one, but the existence of the pang doesn’t mean that I secretly want a wedding.

Being forty-four and not a parent, I half feel feel sick about and half relish the way that announcing I don’t have children immediately injects a shot of discomfort into a social situation, as I feel others preparing for me to regale them with stories of my fiftieth unsuccessful IVF cycle or with a gripping tale of having just stolen someone else’s baby from a Bi-Lo. The dull facts, though, are simply that I did want to have children when I was in my twenties (before any of my friends had had them, mind, and I’d seen what was involved) but I was never in a relationship with anyone who wanted to have them or, at least, not at that time and with me as the mother. Therefore, I never got pushed into parenting in the way I might easily have had I ever dated someone who had happened to want perpetuate his bloodline. You see, I am very suggestible and a person who is always ready to trade in a long-held belief for short-term gain. So, while I don’t believe in the institution of marriage, I would be quite capable of becoming engaged so that I could drink a couple of glasses of champagne in celebration, and I could easily have been talked into having children because I would just love to go on maternity leave, given that I’ve not had longer than three consecutive weeks off work since about the time that Tommy Lee married Pamela Anderson. Now, the difference between my approach and that of any couple I know who has children, is that at least one of them, and often both of them, badly wanted to, essentially because they couldn’t imagine their lives without being parents.

But even when I did want to have children, it was no problem for me to imagine my life without ever doing so; for some reason, this involved an unshakeable belief that I would live in Hollywood and become an entertainment lawyer, like the actress who played Irma in Picnic at Hanging Rock. Perhaps the main stumbling block to me being a mother is that I would have done so much better as a father – not the fathers of today, who all seem mad for ‘getting involved’, but the fathers from the decade in which I myself was a child, the 1970s, when it was permissible for these men just to go to work and more or less be left the hell alone, except for having to mow the lawn, a task that I actually would not mind doing if I had one of those ride-on mowers. It’s not the thought of bearing children that bothers me – I can, in fact, see that creating a human would be fascinating – it’s the thought of looking after children. I have a near-pathological fear of feeding people; I don’t like to have homework happening anywhere in my vicinity, because it depresses me; and, finally, my feeling is that growing up oneself is bad enough, without having to watch someone else go through it and, what’s more, lend them a hand. I’m not trying to present myself as some kind of Charleston-dancing flapper, by the way, as I’m not proud of my limitations. However, I’m not particularly ashamed of them either. I should point out also that I don’t delude myself that I’m accomplishing more professionally or artistically by not having children. I am personally acquainted with any number of people who are parents and who are accomplishing a million times more professionally and artistically than I ever have or ever will. The simple truth, though, is that I like living in an apartment that doesn’t have children in it, and therefore not spending a large part of my days being pestered and doing the kinds of things that I really hate.

And that’s all right because, and in common with almost the entirety of the rest of humanity, as I am not married to a person who is in line for a throne, it doesn’t actually matter if I have children or not. While having children is, clearly, a very important decision and it’s, clearly, very important to look after children properly once you have them, that doesn’t mean that not having them is important. And this is not merely my opinion, it is a simple fact. If you don’t have children, someone else is certain to; and, unless you are actually Einstein, you’re probably not depriving the world of the next Einstein. I realise that many parents will argue, and entirely rightly, for all I know, that ‘there’s no other love like it’ but the fact that there’s no other love like it doesn’t mean there’s no other love at all that’s worth anything. It’s a fine thing to have love to spread around, on all kinds of things, whether, human or animal, animate or not. There’s nothing ‘sad’ about presenting someone with a picture of your cat or showing off your excellent collection of movie memorobilia – all that matters is finding worthy showees, who will reward your enthusiasm and devotion with the appreciation that they deserve.

The childless tend to keep their heads down and not proselytise about childlessness in the way that parents do about being parents and, in my view, this isn’t because childlessness isn’t great because, frankly, it is pretty great but because of the likely annoyance of being accused of defensiveness. In any case, it would be both rude and ignorant for me, or anyone, to attempt to argue either that having children or not having children is some kind of superior choice. I don’t know what it’s like to be a parent, while those who are parents could argue that, in contrast, they are in the position of knowing both what it’s like not to have a child and to have a child. By definition, though, they don’t know what it’s like not to have a child at all and, just as I will never know the joys of parenting, they will never know the joys of never parenting.

At the risk of driving Imagined Slights readers away for ever more with the infliction of some  poorly expressed positive thinking, one beneficial thing about growing older is learning that, just as there’s a downside to almost everything, there’s an upside to almost everything, except, obviously, horrendous tragedies or being forced to participate in horseshit-festooned performance appraisals. As such, if you do have children and they’re sucking you dry and you just want two hours to yourself to go to the damn movies, there are, I don’t doubt, still upsides to it all, just as it’s almost unbelievably easy to locate the upsides to not having children.

So, contrary to what one reads in the popular press, many childless people feel as I do, which is neither that they’ve exactly dodged a bullet and nor that they’ve exactly missed out. Yes, I’m glad that I didn’t end up having children but if I’d had them, I’m sure I would have been glad I had; either outcome would have been fine. But, for the sake of argument, if someone hasn’t had children and wanted to, and believes that the resulting absence of enormous amounts of housework and stress has left a terrible hole in their life, all they need to do is enjoy filling it up. There’s no shortage of great materials with which to accomplish this, even if you’re using several different types, not just one particularly expensive variety.

6 Responses to “Without six you get eggroll whenever”