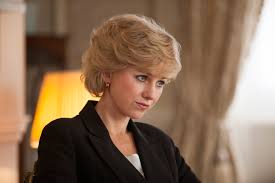 When I visited foggy London town this year, I did two things that demonstrate, once and for all, what a massive idiot I am. First, I forgot to go to that big old David Bowie exhibition; and, second, I was too cowardly to ask anyone at Harrods where I could find the Diana and Dodi memorial, instead deciding to myself, on the basis of exactly no evidence, that it must have been removed. However, even as I sat at Heathrow, with approximately one-hundred-and-fifty-seven hours in transit ahead of me, it was some small consolation that I would eventually behold the new biopic Diana, or, as I would like to have seen it called, because I enjoy it when another person’s name is thrown pretentiously into the mix of a film’s title, Oliver Hirschbiegel’s Diana.

Well, the day finally came that I saw Diana and, while I must point out immediately that the film itself is not really any good at all, it did – unlike, say, The Piano – get me thinking. Before I get to my ‘thoughts’, I must give credit to Naomi Watts for her portrayal of ‘the most famous woman in the world’, as Diana is referred to throughout the course of, what is technically, the action. I admit that I have been one of the baying hounds relentlessly on the scent of the notion that Watts physically resembles not at all the most popular Princess of Wales that humanity has yet seen. Now, though, I have to concede that the top half of Watts’ face did look like Diana’s, meaning that all I had to do was make sure that I, at all times, looked through closed eyes if required to look at the bottom half of her face. Putting Watts’s physical resemblance, or not, to one side, however, she managed the same, seemingly impossible, feat, as did Michelle Williams in My Week with Marilyn, of making a pretty decent fist of capturing and exhibiting a lady so famous and frequently portrayed that she barely seems human anymore, and of doing so in a flick that is as fresh and lively as a housefly twitching its leg after an onslaught of Baygon.

To my mind, aside from the fact that I had absolutely no idea who Juliet Stevenson’s character was supposed to be, the primary culprit in Diana’s minimal effectiveness is its script. Except that I liked the bead curtain he had in his apartment, and except that he would be able to hand out a medical certificate if you felt like a day off work, it is difficult to understand the appeal of Hasnat Khan (Naveen Andrews) as a ‘manfriend’ if he truly did go around stating authoritatively that ‘Jazz is in the moment’; ‘Maria Callas died of a broken heart’; and, on the topic of Tony Blair, ‘He’s what this country needs.’ The film does have at least some power, however, when it loses the yacketty-yak. Watching the princess sitting around a silent pad that is furnished like Claus von Bulow’s in Reversal of Fortune, making toast and baked beans, and having to wear a horrible blazer with a crest at which even Roger Moore would draw the line, does communicate something of how very tedious and oppressive it would be to be a member of the British, or any, royal family. And this is conveyed despite the fact that the princess exhibits the same astonishing freedom of movement as that of the concentration camp inhabitants in the horrendous Life is Beautiful.

The thing is, though, that Diana sent my mind roaming very far afield, like the souls in Flatliners, concerning what a mistake it is to regard being someone’s wife as a career in itself, rather than understanding that a career in itself is something else entirely. Similarly, back when I watched Hitchcock,  I was wrestling like Ravishing Rick Rude with the issues of, first, whether brunch genuinely did exist as a concept in the nineteen fifties; and, second, whether Alma Reville really was always so tiresomely correct about everything. Most of all, though, I was wondering how it can be that a story of a female who is on the whole wind-behind-the-wings ‘trip’ in no way feels like an anachronism.

Now, I am completely on board when it comes to having an interest in females who are primarily known for being the spouses of wealthy and famous men, hence the fact that I was sitting watching Diana in the first place. What I personally find intriguing and, quite frankly, massively attractive about the life story of Princess Diana and her kind is the ease with which they became extremely rich and celebrated, as opposed to, in the manner of Madonna, slaving away at a Dunkin’ Donuts in Son of Sam-era New York City. So, yes, I comprehend the fascination with women who are best known for being wives but I am baffled as to why, in this day and age, decades after the heaving era that gave rise to such relentlessly entertaining book titles as Sappho was a Right-On Woman, they are fawned over, by the press and, it would seem, the public at large. At least Diana herself was, in her later years, always up to something interesting; in contrast, has there ever been a more human being who is less ever up to something interesting than Kate Middleton? Wills and Kate certainly make a person long for the good old days of Anne Boleyn allegedly fucking her brother.

Now, easily one of the most annoying things about women in general is the ongoing mania that so many of them have to act as amateur support staff for men, even when they are accomplished enough that this should not be the best they can hope for. (Yes, Princess Diana herself was notoriously un-extensively formally educated but it’s not as though she was any less intelligent than that try-hard buffoon Prince Charles.) Sadly, it is extremely common that a female will yap away about feminist theory but upon becoming involved romantically with a man decide to structure her entire existence around his job, needs and desires. Acting in this way is not the same things as a person behaving stupidly due to being in love, by the way, given that pretty much everyone, man, woman or beast, acts foolishly when suffering from that particular mental affliction. No, the crucial difference between the sexes is that it is almost always women who operate on the basis that being with someone who is doing something that’s a big deal and assisting him in doing it is equal to, or even better than, actually doing something that’s a big deal themselves.

Yes, you can catapult a whole lot of conditioning-related reasons at me as to why the ladies are this way but I am almost beyond caring why they are this way – I just want them not to be this way. So, please don’t inflict on me Twitter campaigns about how #itscooltobeafeminist!, which have precisely the opposite effect to the one intended, or about being photographed without the facepaint (given that being able to wear the facepaint and yet not be Phil Oakey in 1981 is pretty much the only advantage of being female). Rather, don’t permanently strap yourself to the slow track so that you can run around after other people, and write articles about it for Mamamia between ‘feeds’ (to be sandwiched among the many, many ones that address the terrifying problem of the existence of the Victoria’s Secret Angels in a way that necessitates the inclusion of extensive, and therefore website-traffic-maximising, photo galleries).

Furthermore, ‘Motherhood is the most important job in the world’ is a tossed-around statement that, frankly, needs desperately to be qualified. I don’t doubt for a second that motherhood is easily one of the most demanding jobs, if not the most demanding job, there is but that doesn’t necessarily mean it’s the most important. Now, let me emphasise that there are many, many examples of jobs that I entirely agree are less important than parenting: for example, anything that involves being paid a large sum of money to act as though an incredibly simple concept, such as making a human think he or she wants to buy something, is really a complicated science. In fact, if you are a woman who has such a job, I beg of you to put it second. However, operating merely from the basis of statistics, holding, say, high political office is a more important job than being a mother, simply because you are affecting the lives of a large number of people, rather than those of only a few. When a talented woman in an occupation that actually has some point to it has children, we should, of course, be happy for the lady in question, but that doesn’t mean we should fetishise her motherhood. When, let us say, a female politician who might have become the prime minister decides she will not pursue becoming the prime minister because she wants to spend time with her family, this shouldn’t be greeted with slavering press coverage of what she puts on the school lunches, given that the fact she is doing this basically sucks like a Hoover, for everyone except for her and the people close to her, and possibly even for them.

It is a crazy notion that being a wife and mother is as big a deal as, for instance, winning a Pulitzer Prize or collecting an Oscar, or running the country, because it isn’t. And, this being the case, it is enormously frustrating when a woman with unusual abilities neglects them on an indefinite basis (as opposed to, after a reasonable interval, really getting properly back on that steed called Long-Cherished Ambition) in order to devote herself to tasks that, while they are, obviously, important, demanding and rewarding in their own way, virtually anyone can do to some extent, and it is intolerable when adulatory press coverage is the result. And, yes, yes, I myself am not a mother, so what do I know, but if I were a mother and claimed that being one might not be the most important job in the world, I’d probably be burned at the stake.

All I can say is, the position of the respective sexes will truly have changed when the day comes that a man like Tim Mathieson isn’t regarded as abnormal and a woman like Michelle Obama is. And when it comes to the woman formerly known as ‘Shy Di’, yes, all right, and like most of us, she wasn’t equipped to be a Cabinet minister anyway, but if she hadn’t been so determined to live through whomever she was dating, at least she wouldn’t have had to, if Diana is to be believed, spend her last, precious, years pretending to be interested in jazz music.

6 Responses to “The princess ride (or nappy ever after)”