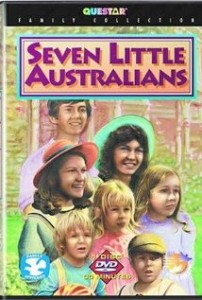 Speaking of Seven Little Australians, this DVD cover is hideous

When I mentioned to a friend that, as my first piece for 2014, writing about writing was my exciting plan, he implored me, ‘For the love of Christ, don’t write one of those columns about how you don’t have an idea for a column!’ Then he referred again to one of his favourite anecdotes, about the time that a celebrity with a weekly newspaper column was forced to break out the old ‘column about not having any ideas for a column’ by their second week on the job. Now, no one could be more surprised than I that not having any ideas is not why I am writing this piece; rather, it just felt appropriate in the early days of the New Year (and, by the way, I am hugely superstitious that even-numbered years will bring me bad fortune and odd-numbered years will bring me good fortune, because I have a distrust of even numbers that I attribute to Iron Maiden’s ‘The Number of the Beast’).

However, that columnist so quickly becoming bereft of ideas is the only thing that this beloved ‘everywoman’ in question and I have ever had, or probably will ever have, in common. For, when it comes to having ideas for columns (by which I mean prose writing produced by the same person, which appears in the same place at regular intervals), I really hand it to those who are able, week in and week out, and sometimes even day in and day out, to generate pieces that are not driven by dependably happening and interesting happenings in a particular area, such as political developments or new television shows, but merely concern whatever thoughts happen to have drifted into their minds. Being so prolific on the topic of general existence impresses me no end, given that, as I never really do anything, the only thought I can count on drifting into my mind is ‘Should I just have toast for lunch or will all the margarine send me blind, just like my mother has told me it will?’. Let me tell you, the thing I envy parents is the great advantage that having children gives them when it comes to having something to say. After all, not only are children always around, doing things that can be described in print, other people will like you more if you have children, as, despite Shirley MacLaine, Idi Amin and the father in Seven Little Australians, the general perception is that if you are a parent, you are no longer as self-involved as you were back in the days when you used to go to the movies; further to this, you are aware that there are more important things in life than wealth, fame and power; and, further to that, you possess personal warmth.

When it comes to why anyone would bother to write columns, or anything else, in the first place, yes, some people are writing because that is how, or part of how, they make their living, but getting around in a bustle to drop off some engraved visiting cards feels more contemporary than does that particular concept. There are also those individuals who claim to enjoy writing, and/or have a voice within them that will not be still, and so forth, which gives them a compulsion to commit words to the page. Either way, I am a colossal non-fan of such pronouncements that if you don’t live by writing, you’re not ‘really’ a writer; or that if you don’t write every day, you’re not ‘really’ a writer. Yes, I would say that, wouldn’t I, given that I neither live by writing nor write every day, but these days, given the way that professional writers are, much too often, not being paid for their writing, and that a person who is not, and has never been, paid to write can have some kind of public profile, it’s increasingly difficult to know what a professional writer even is. And, when it comes to writing frequency, just sit back and consider Donna Tartt, who gives the appearance of not only not writing every day but of possibly not even writing every year. The thing is that a person might write every day but do so extremely badly; are they more of a ‘real’ writer than someone who writes less often but much better than they do? If you are writing because you have a commitment to do so, yes, it will make you write when otherwise you would not have done so, and that can be an excellent thing, in that you may produce something of which you are proud and that would not have existed otherwise. However, it can also be a bad thing, as it’s just as likely you will write something that is helping to waste both yours and others’ lives. All I know is, if someone’s thoughts are presented in the column format, and with a smiling photograph of them, so I know that the piece itself will not be about a topic that will tax me mentally, I find myself compelled to discover what those thoughts are. I would probably be prime minister by now if I hadn’t spent so much time reading columns about things in which I am not interested, written by people in whom I am not only not interested but, quite often, actively detest.

These days I like to call myself a writer, but this is only because I write things that are intended to be read by people who don’t know me. While I have written professionally, in that I’ve been paid, this has not been the usual state of affairs and the only surprise there is that this has ever been the usual state of affairs. Too, it does not generally give me pleasure to write, given that I associate pleasure with activities to which I actually look forward, such as gnawing through a huge log of nougat, or going to Toorak and trying to gawp through the windows of the rich people’s houses. I don’t mean that I don’t enjoy writing because I am so very sensitive that it is painful for me to rip these words from my soul; I mean that it’s difficult for me to be bothered. The pleasure of writing comes nowhere near the pleasure of realising that an idea I had isn’t going to be enough for a column, meaning that I won’t have to trouble myself to write one. Now, given that I hardly have a massive readership, it would be entirely reasonable to ask why the Hell I bother to do any writing anyway. Well, when Tony Martin kindly gave me the opportunity to write for a website that he devised, The Scrivener’s Fancy, a few – and, I cannot emphasise enough, that it was a few – people had some interest in what I wrote, it seemed less to me as though my whole life was just going to be a pointless march to the grave. So, if I knew for certain that absolutely no one else were going to read what I write (I stay right away from Google Analytics, in order not to know for a fact that no one reads what I write), I wouldn’t be writing. I would much rather do nothing, or, if I must do something, watch a television show about lawyers backstabbing each other.

However, while I may not enjoy writing, I do get a bang out of inflicting my ideas on people who don’t know me, and writing is my only medium for this. Also, I defy statistical probability in how many things I am not only not good at but incredibly bad at: these have included, but are not limited to, driving a car (not excluding Dodgems, by the way); riding a bicycle; mathematics; foreign languages; the graceful arrangement of flowers; the blow-drying of hair; all forms of visual art; all forms of sport; all forms of craft; anything to do with music; anything to do with plants; and classical ballet, jazz ballet and anything to do with machines. Therefore, I need to persist with anything that I am even remotely capable of doing, so that I don’t just turn into a big bag of sand. As well, as life is a pain in the neck almost most of the time, all the tedious, hateful things at least being grist for some kind of mill seems to me to be the thing that gives our existences some kind of point (yes, I know most people think it’s their children that give their existence some point but they are wrong).

Now, the big problem with wanting others to read what you write is that, in my experience, there is nothing that can make a person feel worse than having a piece of writing rejected for publication, and I first began trying to get published back in, wait for it, 1984. Believe me, my strong feeling in this area isn’t because I’m so personally attached to my glorious prose that it hurts me personally to have the fruits of my mind rejected, it’s because if someone rejects something I write, it makes me feel that I have all the credibility that I had as a child when I would bang a toy piano and claim to be playing the hits of ABBA, while adults, no doubt, wanted me to keep it the fuck down. Furthermore, it doesn’t matter how many years, and even decades, have elapsed after a rejection, whenever I think of the rejection I will feel that I am not merely pathetic but also deluded, so these unenjoyable feelings don’t even become less sharp with time, the way that the death of a loved one might. Who wants to put themselves through that?

Not I, and, yes, I absolutely do need to harden up, but, in the meantime, this is why I have a website, so that I can just publish whatever I want on it, regardless of quality. I can all too easily remember a time when if I wanted someone else, who wasn’t related or otherwise personally obligated to me, to read what I wrote, my only hope was that one of a handful of overworked professionals would take the time to do so and that it would happen to appeal to their personal taste, which would, in turn, mean that others in the population at large would read it too. I will gladly put up with any amount of awful modern things, like tiny hamburgers, and the cordless computer mouse, and the mouseless computer, in the knowledge that those days are over. Now we can all have the thrill of having something we have created be read, seen or heard by someone who isn’t acquainted with us and so potentially have it affect them in some way. Having this present-day opportunity even just to get on the nerves of someone you don’t know is an honour and a privilege, let alone what an honour and a privilege it is not to get on their nerves.

4 Responses to “A Writing Chance”