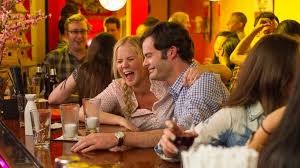 I only wish I’d laughed this much

Now, I really like Amy Schumer. I like her so much I continue to be happy for her name to be mentioned in my presence, despite the way in which The Guardian posts approximately one article about her per minute, whether praising her, or burying her for not solving the problem of racism in twenty minutes or so of cable television a week. When this cable show, Inside Amy Schumer, is at its best (and, yes, it’s not always at its best, as is the case with pretty much every other sketch show in the history of the world), it makes its points without the viewer feeling that she is, yet again, being told things she already knows by someone who is plainly delighted with himself or herself for delivering this ancient mail. Not only do Schumer and her writers often manage to find a new angle on territory that is as well covered as the Melbourne Docklands, they are prepared to take an approach that will potentially offend at least some people, rather than making sure it is fit for the shell-like ears of everyone who isn’t Roman Polanski in the nineteen seventies. Schumer delivers her messages so effectively precisely because her main aim is, it seems, to be funny, rather than to be slavered over by the not especially analytical. However, if there were anything that would cause me to be part of a backlash against Amy Schumer, it would be Trainwreck.

This is the film that, as surely everyone knows, she wrote and stars in, and that Judd Apatow directed, meaning that, I am sorry to say, it is his first project to have nothing whatsoever going for it. Trainwreck concerns a young woman called Amy, who, not unusually for an adult human being, enjoys having sex with different people, drinking booze and smoking weed. She works as a writer for a spiritually bankrupt men’s magazine and can apparently afford to live in New York. She has a sharp-tongued dad (Colin Quinn) with multiple sclerosis; and a sister, Kim (Brie Larson), who, while not appearing to have any kind of job, does have a husband (Mike Birbiglia) and a stepson, and, in a development that will surprise no one, gets pregnant partway through the movie.

Amy is assigned to do a profile of an equable, kindly sports doctor, Aaron (Bill Hader), Trainwreck‘s creators presumably having ice-bloodedly decided to have him work in this area so that at least some heterosexual males would leave the house to see a romantic comedy. Aaron, naturally, also works for Doctors Without Borders, because men in romantic comedies tend to have occupations that are not only glamorous and bring in the cabbage but that serve humanity. Even though Amy and Aaron, completely understandably, don’t take to each other immediately and even though Amy is commitment-shy, they fall in love, as demonstrated by a Big-Apple-based montage that is made no less lazy and clichéd by Amy’s snarky voiceover pointing out how lazy and clichéd it is. However, they eventually have a big fight because Amy answers her phone while Aaron was, for reasons of plot, receiving a Doctors Without Borders-related award, but then they (SPOILER ALERT!) get back together, thus rescuing Amy from her life of enjoying herself And, by the way, they reunite only after an interminable scene of her dancing with the cheerleaders she once vocally despised, in a prime example of a feel-good scene that makes the viewer want only to contact Exit International rather than watch another minute of it.

So, yes, from all the above, you would imagine Trainwreck had been written by the author of Go Ask Alice, rather than by the person who’s become the latest face of the ‘Hey, Women Aren’t Boring After All!’ movement, but I can forgive a flick spinning a line of which I do not approve if it has other things to offer: to wit, I’ve always been able to overlook Ally Sheedy losing her weirdo garb so she can appeal to a man at the end of The Breakfast Club, but continue to be both unwilling and unable to overlook all that is objectionable about that great big bucket of cold sick known as Pretty Woman. Of course I roll my eyes at Trainwreck‘s message that not wanting a spouse and baby is pathological, especially given how irritating it is when celebrities who already have stacks of money and big, fulfilling careers talk up the wonders of having children, when they will never have to worry about the major concerns people have about having children: namely, the cost and never again being able to do anything they want. Yes, it’s colossal bollocks but it’s old-news bollocks, so I’m probably more taken aback by what a lame job Trainwreck does of peddling its notions. Again, while I most certainly prefer movies, and, for that matter, everything else, to function as mouthpieces for my views, I don’t necessarily find it unforgivable when they don’t. I would rather listen to ‘Under My Thumb’, simply because it is a good tune, than to ‘Sisters Are Doin’ It For Themselves’, simply because it is a bad tune. Where I draw the line is being forced to listen to the lyrics of ‘Under My Thumb to the tune of ‘Sisters Are Doin’ It For Themselves’.

Trainwreck takes two hours for not all that much to happen, and little in it makes much sense to the naked eye. To start with, there is no chemistry whatsoever between the couple at its clogged-up artificial heart. Amy and Aaron have nothing in common, and montage aside, don’t get along most of the time, but it’s not in a sexually charged battling-Burtons sort of way, it’s more in the manner of neighbours coming to blows at a strata committee meeting. Too, we are given to believe Amy is The Way She Is because of her parents’ unhappy marriage and because of having had a father who has preached against monogamy since she was a child, but what actually happened to her mother? Yes, I freely admit my attention may have wandered when this was explained, but is she dead or did she run off with the pool boy? And, while we see and hear plenty of Amy’s dad, who resembles a wheelchair-bound poor man’s Don Rickles, we are right out to sea as to what kind of person her mother actually was. And, too, why is Amy’s appealing, seemingly intelligent sister married to a man who gives the impression of being mildly retarded? Then, regarding the lack of fun in the telling of Trainwreck’s tale, and although I most certainly am in favour of improvisation, there are too many ‘shooting the shit’ conversations the idea of which someone must have thought was hilarious but that contribute little except to the running time.

And, at the end of the day, the problem with Amy isn’t the determinedly untethered way she lives her life. Her problem is that this is the only appealing thing about her, because she’s such a big old bitch. To me, this is not a gender issue. Whatever sex you are, being moody and gratuitously nasty to everyone just makes you moody and gratuitously nasty, not a ballsy broad (or gent) who’s too rich for other people’s thin blood. In the world of Trainwreck, it seems, the only choice humans have is to be smart but horrible (Amy and her coworkers); smart and nice, but sans career and married to an idiot (Kim); nice, and smart enough to work as a medical practitioner, but with an overly unquestioning appreciation of sport and Billy Joel’s ‘Uptown Girl’ (Aaron); or just unbelievably stupid (Kim’s friends, who make cartoonishly daft remarks at her baby shower, again raising the question of why this woman surrounds herself with the halfwitted). I’m sure we’d all like to think there’s an alternative to being either the kind of person who is beastly to everyone all of the time or being the kind of person who has an uncritical admiration for the way in which cheerleaders bring people together.

Of course, the biggest lie of romantic comedies, aside from all the other ones, is that if you are in a relationship with someone, you will make each other better people. Yes, you will end up knowing many more great places to eat but, really, you’re stuck with each other’s faults, and the only way to stay together is to learn to live with them, which is, no doubt, why the divorce rate is as high as it is. There’s no way on god’s earth Amy Schumer isn’t bright enough to know that. Beneath all her not-having-it-together schtick, a large part of her appeal is that, even though she is young, she seems to know (with equal-opportunity amused sarcasm, rather than with smugness) a lot of things, and to know them better than a lot of other people do. So, how could she not have known better than to inflict Trainwreck on a world that deserves better, and to which, until now, she has given so much better? Well, the bad news is that this wretched flick has been a big hit, but the good news is that because it’s been a big hit, Amy Schumer is sure to write and star in another movie. It just better not be Trainwreck II.