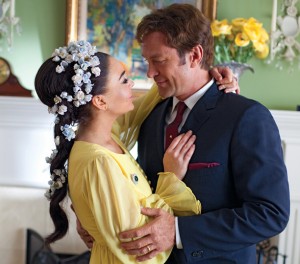 The re-enactment of Taylor’s wedding hair

Imagine my delight when I tore the wrapping from one of my birthday presents and discovered a copy of the much-maligned biographical telemovie Liz & Dick. Had I a first-born child, I would gladly have traded it in for this bounty.

I initially developed a keen interest in, and enthusiasm for, the love affair between Elizabeth Taylor and Richard Burton when I was still only a child myself, thanks to a volume called Hollywood’s Great Love Teams that I had on almost permanent loan from the local library. It gave potted histories of the lives and careers of, to name but two people, Nelson Eddy and Jeanette MacDonald. Now, Eddy and MacDonald were all well and good, but the ‘love teams’ who most seized my imagination were those who were passionately involved in real life, and Burton and Taylor were, by far, the most exciting examples of this phenomenon. Bogart and Bacall, and Newman and Woodward, just seemed too sensible, even if Bogart was a massive booze hound. The descriptions of Burton/Taylor vehicles such as The Sandpiper and Boom! bewitched me completely; and the films themselves made me think myself a winner in the game of life when they appeared on the midday-movie schedule on a day that I had managed not to be at school, back in an era that if you missed something when it was shown on television, you potentially missed it forever.

Controversially, I watched the Liz & Dick DVD extras before watching the film itself, and knew I was in capable hands as soon as I’d wolfed down the interview with executive producer Larry A Thompson, a splendid fellow with a black fedora and a southern accent. In this marvellous interview, he says, understatedly, ‘I like doing iconic bios,’ having also executive-produced Lucy & Desi: Before the Laughter (although I must confess that I would be much keener to see them after the laughter); And The Beat Goes On: The Sonny and Cher Story (about which an IMDb user comments confusingly, ‘I thought that this movie was going to be very lame, but it was better than I thought it was’); and The Woman He Loved, with Anthony Andrews and Jane Seymour as, respectively, Edward and Mrs Simpson.

Liz & Dick begins with a scene that is cheerlessly – or cheerfully, depending on your point of view about people who recite Shakespeare when no one has requested or wants it – captioned ‘The last day of Richard Burton’s life’. It then gallops through the highlights of their relationship, the action punctuated by Elizabeth (Lindsay Lohan) and Richard (Grant Bowler) sitting in deck chairs, chatting about their history together. Quite a large proportion of the non-deckchair proceedings take place on the set of the unfeasibly boring epic Cleopatra, a set that in Liz & Dick looks like something out of the old Sydney Luna Park River Caves, which is a particular shame when you consider that the only thing that can be said for that especially wretched motion picture is that it looks sumptuous. The denouement of their marriage takes place with a fight on the set of Bluebeard (something that fills me with savage envy); then, in the final ten minutes of Liz & Dick, Burton and Taylor get divorced; she has a cancer scare (while being watched over by perhaps the least reassuring doctor of all time: ‘Your blood tests … I’m not saying it’s colon cancer …’); they remarry in Botswana; they divorce again; Burton finally dies and Taylor tearfully visits his grave.

From my, frankly extensive, knowledge of the pair, it all seemed fairly accurate. So, I must point out that while I am a fan of the How Did This Get Made? podcast, some of the things that they made fun of in their episode, or whatever you call it, about Liz & Dick were based on cold hard fact: for example, Richard yanking Elizabeth on stage after a performance of Hamlet to announce, ‘In the words of the immortal bard, there will be no more marriages’; and the couple deciding, in their ongoing quest not to pay taxes, to live on a boat (‘You’re living on a boat!/’A yacht, Mother. There is a difference!). Any problem with Liz & Dick has much more to do with something that is the opposite of inaccuracy: namely, all the unlikely statistics-based talk that trying to cover a lot of ground in a short time has led to. For example, Elizabeth rattles off the total number of movies she’s made; Richard’s man-of the-people brother, Ifor (David Hunt), has the names and order of all Elizabeth’s husbands at his fingertips, just as, though less surprisingly, her mother has the number of Elizabeth’s marriages at her fingertips; Elizabeth herself recites the total number of movies she’s made; and there is a run-down of the winners of the major Oscar categories in 1967.

Putting stats to one side, however, there is much in Liz & Dick to rejoice, such as Ifor dismissively saying, ‘It’s not exactly coalmining, is it?’ when Richard complains of his professional lot, and Richard’s firm rejoinder that ‘You know where you are with a seam of coal!’; and the chance to see, in live action, Taylor’s mad hairstyle from her first wedding to Burton, of a ridiculous braid with many blossoms plaited through it. And who doesn’t want to see a woman having a bubble bath in full Cleopatra makeup; or wearing false eyelashes to bed; or frying an egg while puffing on a fag; or putting a cigarette holder to good use while being presented with the Krupp Diamond; or swigging from a bottle of hard liquor while wearing a big black fur hat and growling, ‘What are you looking at?’; or demanding of her husband, ‘You call Wallis and Edward!’; or barking at someone else,‘Get me Aristotle Onassis! Now!’ And then there is the following magically peculiar exchange, that Elizabeth, while at a loose end, has with her mater:

(Elizabeth, to her mother and the servants) ‘What do people do when they’re not working?’

‘Don’t ask them, dear, they are working.’

‘Of course they are!’

Lindsay Lohan doesn’t especially sound like Elizabeth Taylor, except insofar as Elizabeth Taylor sounded like Lindsay Lohan, and looks only moderately like her (Stockard Channing is pretty much the sole living human who genuinely looks like Elizabeth Taylor), but the great thing is that Lohan has Taylor’s quality of overripe zest, and of seeming freakishly old in her mid twenties, because she has seen and done just so damn much. Too, the way Lohan flounces around, and moves and talks like someone who’s been being watched by everyone in the room since she was a child, seems bang on the money. Furthermore, and unlike so many actresses who are professionally active in the nanny state in which we all exist today, Lohan can really smoke a cigarette with feeling and enthusiasm. Ultimately, and while I detest the whole concept of ‘likeability’, I found Lohan’s Taylor immensely likeable, especially in her gracious reaction when the upright Ifor finally unbends towards her; or when she asks a hotel employee if he’d like a drink (I know he would,’ she says, in reference to Guess Who); or replies ‘Boo hoo’ when Richard is bleating on about the script for Bluebeard being unactable.

In contrast, the viewer wants only to hit Richard over the head with a saucepan, with his endless windbaggish moaning about Paul Scofield having remained in the theatre, and sulking whenever (unlike his nemesis, Scofield) he didn’t win an Academy Award and generally being a total cock in the face of any problem, whether large or small. ‘Richard the drunken court jester’ is how he describes himself, while rooted to the deck chair, but all I can say is, the court wasn’t exactly getting value for money out of its jester. Bowler is too tall for Burton but he makes a good fist of the voice on which the rich man’s Anthony Hopkins leaned far too heavily, and is, to my mind, much better at playing a real person than was Daniel Craig as Ted Hughes. Also, the way in which bellowing at paparazzi or playing the Dane is all the same day to Liz & Dick’s Burton has the ring of truth when you consider that Burton himself walked through pretty everything he was in except for Who’s Afraid of Virginia Woolf?

The point is, that it is everything that makes the Liz & Dick portrayals of Taylor and Burton, and that makes Liz & Dick itself, so wrong that makes the portrayals, and the film generally, so right, meaning that some ever-so-classy exercise about the duo would be wronger than wrong. Thus, even though, in one way, I long to see it, I am extremely sceptical about Burton and Taylor, starring Dominic West, with all his bloody old The Wire credibility, and Helena Bonham Carter, whose eccentric manner of red-carpet dressing does not represent a glorious tastelessness but serves only to remind us she has the limitless confidence in herself and her choices that is native to the English toff. I find it difficult to imagine that anything starring these individuals is likely to lead to genuine rolled-gold Burton-and-Taylor-style fun.

Essentially, while Liz & Dick is, on one level, just as bad as people say, this doesn’t stop it working on another level, although it, of course, has the benefit of being based on real events, which allows the viewer to fill in the gaps and so feel more about what the film is showing us than the film itself could evoke. That is, it’s sad to think that Taylor and Burton are both dead, with all that grand passion, and the major upsets to which it led, being reduced to nothing that exists physically in the world. It is sad to read in Burton’s diaries that at the time of their hugely mocked appearance on stage in Private Lives in 1983, he was finally bored with Taylor (though he may just have been saying that because he thought he would die fairly soon and it would cheer up wife number four to read this piece of information.) More generally, it is sad for us all that marriages almost always start with high hopes, and invariably end either in divorce or death.

The bottom line for me is that I was genuinely touched at the end of Liz & Dick when Lohan says, ‘I could feel that he really loved me. He just loved me.’ And this was only partly because Lohan herself seems so underloved.