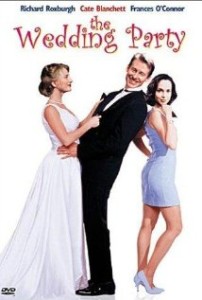 I am never sure whether it would make a person feel good or bad to hear that either they themselves or something they have created is thought to be severely underrated. Yes, naturally, being classed as underrated would be better than being classed as overrated, but the trouble is that it indicates a dearth of applause that the person in question may not even have realised was their, or its, lot. So, at the risk of causing offence should anyone involved with the motion picture in question be reading this, my vote for Most Underrated Australian Film goes to Cherie Nowlan’s Thank God He Met Lizzie.

I first saw this work at Sydney’s Cremorne Orpheum in 1997, and the trouble with going to the Orpheum was that you always felt slightly ripped off if you weren’t treated to the man playing the olden-time organ, even though you hardly ever were treated to the man playing the olden-time organ. In fact, I think I can only ever recall once being graced with his presence, before a teeming Saturday-night screening of Fatal Attraction. Nonetheless, I remember that when I saw Thank God He Met Lizzie, my good humour quickly returned during its opening scene, when a party guest, apropos of nothing, says to another, ‘You know who I really hate? Prince Andrew.’ This line didn’t make me so happy because I had a particular prejudice against this unfortunate royal, mind you; it made me happy because of the unexpectedness of it. And it is this kind of unexpectedness that makes the film so pleasurable and so profound, with a story that is both as simple and as complicated as stories get.

Guy (Richard Roxburgh) is thirtyish and single, and desperate to be in a serious relationship with a woman, something that he spectacularly fails to accomplish by going to parties and being set up on dates. One morning, however, while out running, he sees a pregnant cat in distress and, while seeking assistance, ends up at the expensive doorstep of a glamorous doctor, Lizzie (Cate Blanchett). After a brief courtship, they decide to marry, resulting in an elaborate wedding. However, even though Guy is besotted with Lizzie, he finds himself thinking constantly about his previously most significant affair, with Jenny (Frances O’Connor).

Lizzie and Jenny, and their respective relationships with Guy, are of such opposite natures that this triangle could, in lesser hands than those of this particular writer (Alexandra Long), director and actors, feel contrived and unconvincing. Namely, Lizzie has a father who is a surgeon and a mother who would be able to hold her own with terrifying socialite Charlie in Sons and Daughters, while Jenny comes from a cheerfully eccentric working-class family; Lizzie is elegant and hyper-controlled, while Jenny is charming but chaotic; Lizzie is a blonde, while Jenny is a brunette. Lizzie and Guy got together in the sort of romantic way that is tailor-made for being recounted in a father-of-the-bride speech; Jenny and Guy got together because she purposely rammed her pool cue into him at a pub, and later staked him out at a party, after which they had sex for the first time, in a car.

Whatever differences the women have, though, Guy becomes equally disillusioned with both of them, although the process is much faster with Lizzie. His relationship with Jenny had curdled over years, turning from affectionate banter and high old times in the bedroom into his becoming chronically irritated at the way in which she never shut up, wouldn’t wash fruit before she ate it, read over his shoulder and left her dirty clothes on the floor, while she resented this pecking, and was hurt by his reluctance to marry and have children with her. Regarding Lizzie, though, Guy quickly makes several unpleasant discoveries during merely the course of their wedding day, among them that, while he had believed his meeting with her was preordained and their relationship some sort of miracle, he was really just part of her plan to be married by thirty. Then, once the newlyweds are ensconced in their hotel room, she deals him the worst blow of all.

Now, aside from anything, Thank God He Met Lizzie is often very funny, as when Lizzie assures her husband-to-be that the priest who will marry them has a great sense of humour and Guy replies, ‘They all do now; it doesn’t prove God exists’. And there is the nuttiness of Jenny’s father (Roy Billing), with his ‘tune I penned in an idle hour’ (a bizarre ode to the Sydney Harbour Bridge); his refusal to accept Latin’s status as a dead language; and his obsession with the Republican movement and statistics about Queen Elizabeth’s use of public money. And then there is the wedding MC, Darren (Jonathan Biggins), referring to himself on his business card as a landscape gardener and ‘specialist in human relations’. It is, of course, also small, exquisitely surprising moments that make it a deeply sad film. When Jenny and Guy finally break up, and he says, ‘The magic’s gone; we can’t get it back’, we are expecting her to insist that they can. Instead, though, she replies, ‘Why would we want to do that?’ This line makes no sense in one way, while also making total sense, in telling us just how much Jenny wants to cling on to whatever it is they still have, whatever state it’s in.

And this brings me to why, most of all, I am crazy about Thank God He Met Lizzie, and that is the extent to which for the past fifteen years or so it has really made me think about its characters, their existences and the wisdom of their actions both within and without the ambit of the film. Namely, I’ve always imagined Jenny having a truly septic time with men throughout her thirties but meeting the honest-to-goodness love of her life in her forties. In the case of Guy and Lizzie, it is equally possible to imagine them undergoing a bitter divorce; staying together semi-miserably for the sake of the children whom we see briefly in the final scene; or, who knows, perhaps even ultimately being happy together and only parted, and reluctantly so, by death. I can’t tell you how many hours I’ve devoted to debating whether Guy was wrong or right to exit from his relationship with Jenny and, yes, on one hand, his having done so is deeply upsetting, especially his lack of appreciation of her spirit and originality, and of how genuinely mad about him she was; on the other, he had fallen out of love with her and, quite possibly, was only ever as much, or as little, in love with her as he was with Lizzie. At the end of the day, just because we, the viewers, are in love with Jenny, it’s not fair to expect Guy to be.

As well, the fact that he couldn’t stop thinking about Jenny the more serious his relationship with Lizzie became doesn’t mean anything. I’ve known men who have wept and wailed about exes whom they came to appreciate too late, but all this carry-on didn’t mean they should still have been in those relationships; it was much more to do with the past itself, due to its certainty and, thus, its safety, seeming wildly attractive to them. And, not only had Guy’s and Jenny’s relationship reached the terminal stage, the fact is that Jenny, winsome though she is, didn’t bring out the best in Guy; in fact, she brought out the worst, so that when he was with her, he was fussy, nagging and mean. He is actually a much nicer man when he’s with Lizzie and, yes, he may well have become a lot nastier later in their relationship, but while Lizzie upsets Guy in big ways, she seems much less likely than Jenny to upset him in the small ones, and that is what makes the difference in day-to-day life, let’s face it.

In terms of its reception, it’s my belief that Thank God He Met Lizzie suffered from not being what it wasn’t – namely, something that featured Loene Carmen playing a junkie. This seems to have made for a widespread assumption that it was going to be either a bland romantic comedy based around improbable wish fulfilment or a quirkfest based around improbable wish fulfilment, or some vile combination of the two. I’ve known people who have become fans of the film only after having deprived themselves of it for many years because they would rather have cooked and eaten their own feet for breakfast than seen either a bland romantic comedy or a quirkfest, while anyone who saw it and were expecting, and wanting, another Muriel’s Wedding would, I imagine, have been taken aback at what a downer it is and so not given it the positive word of mouth that makes for a hit. But I defy anyone not to be affected by one of Thank God He Met Lizzie’s final lines: ‘ The trouble with happiness is, you don’t know when you have it; you remember it.’ And, the thing is, I don’t actually even agree with that statement, but I’ve spent an hour and a half watching characters so beautifully constructed and acted that, no matter their faults, I just can’t stand the thought that, wherever they are now, their best days might be behind them.

I originally wrote this for, what was, the AFI’s most excellent blog, ‘Why I Adore …’, which, sadly, is no more. I strongly recommend the Googling of it, as it is still on the World Wide Web; there just aren’t any entries newer than the one posted here. I always loved reading this blog, so was thrilled to contribute, and have the great pleasure of interacting with the brilliant Rochelle Siemienowicz and Bradley Dixon. I am posting this piece now, partly because I am, as ever, lazy and bereft of ideas, but primarily because I thought it seemed appropriate for the traditional gloomy stocktaking to which the end of year gives rise  –  of course, the good news is that at least we in the Southern Hemisphere have the amazing luck of getting to do it in warm weather. And, on that note, I wish the happiest possible Christmas and New Year to anyone kind enough to be reading these words!