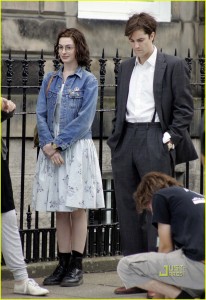 A good time being had by all

Thanks to a generous friend, I just saw free of charge the film One Day. In common with almost no one, I had been wanting badly to see it, although this was largely because if I can’t see a motion picture about either a hedge fund manager (whatever that is) who is concealing immense financial losses; or about someone who is pretending to be a qualified doctor and accidentally slaughtering their ‘patients’; or who is building a successful writing career on a basis of lies, plagiarism and general treachery, I want to see one that has the promise of lovers fighting in the street after they have just had an expensive dinner at a restaurant, complete with a snobby waiter who interrupts them at a crucial moment.

At any rate, One Day is the story of Yorkshire bluestocking Emma (Anne Hathaway) and toffee-nosed young blade Dexter, or ‘Dex’ (Jim Sturgess), who first get together in the late nineteen eighties, when they are graduating from university, and become friends for approximately two decades, for most of which Emma is unrequitedly madly in love with Dex and he is carrying on like Michael J Fox in Bright Lights, Big City. Emma, by contrast, Has Substance, as demonstrated by the way in which she reads a Milan Kundera novel and goes to see ‘art movies’. As well, Dex becomes the host of a noisy late-night television show, while Emma, after a ‘lost’ period during which she waitresses at a Tex Mex restaurant, has one of those patented Mirror Has Two Faces-style blossomings, becomes a schoolteacher, and then starts penning, in perhaps the least surprising plot development ever, right-on children’s books.

Now, Dex has a septic time of it at certain points in the story, a state of affairs that is due almost entirely to his nearest and dearest. For starters, his mother, Alison (played by Patricia Clarkson, for some reason), and father, Steven (Ken Stott), are massively down on him because he hosts a TV show. Steven lurks reproachfully around at the studio on his one-and-only visit, after Dex has already had a terrific time on a sojourn home to see his mother when she is expiring from cancer but still sees fit to remonstrate with him about her disappointment in him and his career because ‘We always thought you could do anything’. Well, all I can say is that he’s hosting a damn TV show, and that he should be telling the pater and mater to be putting that in their pipes and smoking it. It is difficult to tell if the audience is supposed to think his parents are nothing but vile individuals who’ve done a massive number on their son, or if they are supposed to be Sage Truth Tellers Who Are Eccentric Yet Down to Earth in The Delightful English Way, but, I am sorry to say, I am fairly sure that they are supposed to be the latter. The difficulty with all this bitching and moaning from the folks, though, is that Dex’s life looks totally awesome, much like that of the sex-addict fellow in Shame.

But, just in case he hadn’t been shoved through the mill enough by his ghastly parents, he also has to contend with Emma. We hear a lot about how very witty she is but the evidence is thin, as she stomps around, making nasty remarks and taking offence at virtually anything anyone says to her, although that is still preferable to the way in which before her first shot at nailing Dex she announces that she’s no good at intercourse because she always ends up laughing or crying; really, she should just get on with it, like a normal person. Essentially, given Emma’s accent, her ostentatious glasses-wearing and her incessant passing of judgment, going out with her would be like dating Charlotte Bronte. Towards the end of the film, Emma’s unfortunate ex-boyfriend, a would-be comedian called Ian (Rafe Spall) whom she has treated like garbage almost all of the time, informs Dex that ‘She made you decent’. Well, geez, how grim, and deserving of a punch on the nose, is that statement? Nonetheless, we are informed that Dex, in return for this monochrome gift, made Emma glowingly happy, something that was not immediately apparent to me, given her almost-unrelenting rudeness. In other news, Dex ends up as the proprietor of a wankertronic-looking eatery with, no doubt, either the word ‘Tuscan’ or ‘Provence’ in its title, which, to my mind, causes him to be a much bigger blight on society than his work in ‘youth’ television ever did.

Now, the rot at the heart of the film is that Dex and Emma just don’t really seem to get along, not least because he seems basically not to be interested in her – and who can blame him? Dex demonstrates more chemistry with Ian, whom he openly dislikes, in one conversation than he does with Emma for the entirety of the rest of the film. His and her union feels not like a friendship but, rather, like a romantic relationship that has already made its inevitable way into the can, what with all the sniping, public arguing and grinding disillusionment with each other. Having said that, though, One Day appears to be a film for which the big shears have clicked and it is quite possible that nuances have been lost. Thanks to, I assume, this whittling, at one point Emma is suddenly in horrible Paris, and dating a Frenchman who – wait for it, is not only a jazz musician but has the name of Jean-Pierre – and it turns out that she and Dex had actually had intercourse at some point after his divorce from posh bird Tilly (Jodie Whittaker), whose lack of humour is made much of, by the way, as it is, allegedly, in such contrast to Emma and her merry quips. I must say that these developments made me feel, as I struggled to put the pieces together, as disoriented as one of those amnesiacs in The Young Doctors who underwent car accidents and consequently lost ‘all their medical knowledge’.

Aside from anything, I can simply never believe in the thesis that people are drawn to their opposites. Personally, I prefer others to be as much like me as possible, on the basis that it saves arguments. One of the reasons that Sex and the City yanks my chain is that I can never believe in the concept of a closeknit group of friends packed with opposites: that, for example, one party likes to communicate in laboured sexual innuendo, while another party is like a creature out of Young Pioneers’ Christmas. Yes, I understand why this phenomenon occurs in fiction – namely, so that four characters can represent one whole actual human – but I am yet to see it in real life in a group of individuals who voluntarily see each other more than once a month. The fact is that people who have qualities that you don’t have and don’t admire are irritating, and people who have qualities that you don’t have and do admire are annoying also. Therefore, there is no possible way that Dexter and Emma would have become friends, let alone (SPOLER ALERT!) forging a marriage out of the fire; at most, they might have had a solitary ‘make-out’ session in a cab about which at least one of them was embarrassed.

And, speaking of inauthenticity, I have to say that I was amazed when I watched the One Day’s bonus features, to see the makeup designer congratulating herself heartily on having pulled off the characters ageing over a period of twenty years, considering that Emily and Dex look pretty much exactly the same age at the end of the film as they did at the begining, even though they are, presumably, supposed to be about forty. The most that happens is that Dex’s hair changes to a greyish shade, as per Elizabeth Taylor at the end of Giant. As well, the production people all carried on about the research that was done regarding the time in which One Day is set, as though the action were taking place in ancient Babylon, as opposed to London in the nineteen nineties. At any rate, if they did so much research, why are not all the women in the film wearing 501s teamed with bodysuits and Dr Martens shoes? This was, after all, as rigid a dress code for young females of the time as anything governing the little outfits in The Handmaid’s Tale.

On the other hand, 501s do get their due in the novel by David Nicholls on which One Day is based. Now, I had not read the book before I saw the film, but have now made a point of doing so, which in itself indicates the movie exerted some kind of power over me. And, yes, the book is far superior to the film, but a book being superior to its cinematic version is not inevitable: for example, The Accidental Tourist is a perfect adaptation of a perfect novel; Sideways is, to a degree difficult to convey merely with words, better than its source material; and High Fidelity, against all possible odds, succeeds extremely well, and while it is, to my mind, not quite as satisfying as the book in some ways, it actually manages to improve upon it in others. The thing is, though, I got a bang out of reading One Day that I did not get out of watching it partly because, while Emma of the novel still rides a bicycle extensively and revels in playing Scrabble, I did not want to send her a series of abusive anonymous letters. This is because fun is poked at Emma’s youthful idiocy and pretensions, not merely at Dex’s, and she is permitted to do stupid things, such as having a dispiriting affair with her married boss, rather than relentlessly doing good and doing right, like Kimba the White Lion.

The thing that really depressed me is that those involved in making the film of One Day seem truly to love the book and to have had the best of intentions; however, Time itself defeated them, because they had to cover twenty years in under two hours. In When Harry Met Sally, by contrast, only ten years needed to be dealt with, and fewer momentous events, which left space for us to see Harry and Sally actually just really enjoying themselves engaging in pointless conversations and pointless activities, in the real manner of friends. This is why When Harry Met Sally will endure, I tell you, even though many thinking people despise it as merely Woody Allen Lite; and despite its soundtrack on which Harry Connick Jr murders various musical standards; and despite Meg Ryan’s awful perm; and despite the many things for which Billy Crystal should never be forgiven, such as Mr Saturday Night, his ‘serious’ Vietnam-vet monologues, and, I can tell already, the upcoming film Parental Guidance.

In conclusion, I should point out that I had reservations about Dex’s and Emma’s relationship even in One Day’s book manifestation, given that they have little in common and that Dex is just not very intelligent. However, at least the ratio of occasions on which he and Emma are having a good time with each other to that of occasions on which they are giving each other the pip is much more what it should be if we are to feel that their finally getting together can, in any way, qualify as a positive turn of events.

8 Responses to “When it hasn’t been your day”