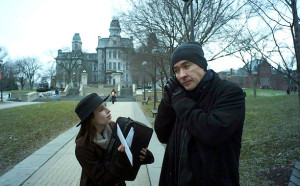 An adult world where it’s so cold that hats aren’t merely an affectation.

Recently, I watched a little film called Adult World, and I have to admit that, though it is not surprising, given my customary ignorance, the only reason I have heard of this movie is because I continue to keep abreast, as much as I can, with the career of Mr John Cusack. In the nineteen eighties, and for much of the nineties, I made it my top priority, in a life that, admittedly, was not bulging with what you would call urgent priorities, to see any Cusackian flick that I could get my sweating hands on. I recall many a long vacation spent vainly trying to adjust the tracking on One Crazy Summer, Hot Pursuit and Tapeheads, and that I even willingly submitted myself to the uncompetable-with boringness of The Thin Red Line. I drew the line only at The Journey of Natty Gann, because it was a costume piece about tramps that had at its centre a tomboyish girlchild, indicating that nattiness would, ironically, be in short supply. Now, one of the good things about life before the internet was that whenever I happened to be, as I usually was, leafing through a magazine, and came across an interview with whichever actor/personage from a band I had selected to be my husband, it felt like a message that the two of us were meant to be, given that being privy to the thoughts of your beloved was a matter of, apparently astonishing, cosmic alignment, rather than merely the cold robotic intelligence of search engines. And, as you may imagine from what I’ve said so far, it was always a particular treat to see Cusack’s rumpled form as he spoke out against Hollywood, yet elected to appear in, for example, Con Air.

Now that we have the information superhighway, however, I can, instead, spend a lot of time watching the trailers for Cusack’s films, and I mean a lot of time, given that Adult World was released in 2013, and, according to the IMDb, he has since been involved with fourteen more movies. The way in which his output seems to have increased with every decade since the nineteen eighties means that trying to keep up with Cusackian releases makes me feel like Lucy Ricardo struggling to wrap chocolates as they travel with haste down a conveyor belt. However, every now and then, I will see a trailer for one of Cusack’s films and announce, ‘This one I’ll see,’ thus paraphrasing the humble pickle merchant in Crossing Delancey, when he agrees to a matchmaker’s suggestion that he meet a snobbish bookstore employee; and Adult World was, obviously, one of those films that matchmade itself with me. This was partly because Cusack looked pretty good in the trailer, not bloated and pasty the way he can do in movies, such as the loathsome America’s Sweethearts, where he’s selling out more extensively than radiators in a cold snap; and partly because I enjoy things about people who are meeting with extensive humiliation while attempting to achieve publication, as this is one of the few human activities with which I am familiar.

When it comes to the facts, the director of Adult World is Scott Coffey, who played the role of Ray, a character I do not recall, in Some Kind of Wonderful, which is, arguably or perhaps inarguably, John Hughes’s weakest teen flick. And World itself is about a young lady, Amy Anderson (Emma Roberts) who has recently finished college and is convinced she will become a great poet, but, as she is not meeting with any success in this quest and is fairly unemployable, has to take a job in a sex shop. She also befriends a transexual, Rubia (Armando Riesco) and attempts to force her hero, ex-wonderboy poet Rat Billings (Cusack), to become her mentor but instead has to suffer through him cutting her down to size in a particularly awful way. Yes, indeed, there are too-predictable elements in World, such as Amy hooking up with her unfeasibly nice and regular-featured sex shop colleague Alex (Evan Peters), and the whole storyline with Rubia whips the horse of Amy Needing to See Life Before She Can Write About It a little hard, but the film also has its pleasures, believe me. To start with, Roberts and Cusack are both superb. Now, when it comes to Roberts’ aunt, Julia, I’ve been annoyed with this widely beaming lady for years. Aside from her association with the civilisation-destroying Pretty Woman, this is because, while I was leafing through a magazine one day, I read that she had wanted her role in the above-mentioned, and hateful, America’s Sweethearts – of the dowdy personal-assistant sister, rather than Catherine Zeta-Jones’s role of the bitchy, glamorous movie-star sister – because she, Roberts, was an overall-wearing kind of gal, not a glamour queen. The irritating thing about this, of course, is that it was Roberts’ character who was the one we were all supposed to like, and that that would have been the only reason she elected to portray this insipid personage. Her niece, in contrast, at the age of twenty-one or something, exhibited the brains to be willing to play someone who is unsympathetic most of the time, being conceited, thoughtless and pushy, but, as a result, this fine young actress will not have her name attached for all time to a super-strength vomiting machine like America’s Sweethearts.

On the question of Cusack, he quietly and effectively conveys all of Rat’s great boredom with everything about himself and everyone else; he doesn’t really say that he dislikes much, but he doesn’t seem to like anything much either. It’s clear that the way he chooses to humiliate Amy has as much to do with his own disgust at himself and his stalled achievements as it does with anything else, and that he’s too self-absorbed even really to understand fully how hurtful it is to her; this fog of self-absorption, while it makes him more culpable in one way, makes him less culpable in another. Too, I found it pleasing that the question of whether Amy is actually a good poet or not is left open; she neither triumphs at the end nor has to take it on the chin that she’s untalented. Plus, except for Xanadu, you don’t often see films targeted at young people that have anything to do with poetry; generally, they are biopics expected to appeal to middle-aged women like myself who enjoy meeting at a Palace Cinema, where the bathrooms are nicer and you can take your overpriced glass of booze into the cinema to sip while watching Sylvia (in which Gwyneth Paltrow gives probably the most underrated performance in the history of cinema, by the way; now that she’s constantly being set upon by baying housewives and ‘ordinary working mums’, many people seem to have forgotten how talented she actually is).

So, Adult World, like everything else, isn’t perfect but, unlike a lot of things, is pretty good. So my question to you is, why does one ‘small’ film get a cinema release and another doesn’t? Speaking of Palace Cinemas, it was off to the Como that I trotted to watch Liberal Arts, a motion picture so infuriating that I fear for my health were I even to describe it in any kind of detail, let alone sit through it again – after thirty minutes, my companion had to hare off to Big W and eat his ‘gourmet’ choc top on the run, simply in order to avoid seeing another frame. Suffice to say, it was about a complete wanker, Jesse Fischer (Josh Radnor), who returns to college when he is in early middle age and has a chaste affair with an ostentatiously life-embracing nineteen-year-old drama student and spontaneous hugger, Zibby (for god’s sake!) (Elizabeth Olsen), who is probably the only person in the world more irritating than he. It was as a much a ‘small film’ as Adult World, and with lesser, or, at most, only equal star power, so why should it have been given its chance not to shine on an Australian movie screen when World wasn’t?

Now, I have no idea why this was in terms of actual facts, but it has caused me to think about a conclusion I have come to that many heterosexual men don’t really want to watch things that have female central characters. I say this because I’ve observed that while many ladies, unless they are bleaters about screen violence, will watch man-centric films or television shows, straight men often do not return the favour. While I would be thrilled to hear that I’m wrong, and I appreciate that what I am saying is merely anecdotal, it seems to me that many non-gay men either don’t like, or just aren’t interested enough, to watch, let us say, Girls or the astonishing Enlightened, and the males I am talking about are by no means neanderthal beasts, let me tell you. Some might claim that heterosexual men are not interested because they, peculiarly, are not interested in what women are thinking, but it is often the case that heterosexual men are not interested in what other men, or even themselves, are thinking either, so I don’t know that it’s that simple. And, yes, I admit that Homeland is an exception but I would point out that, aside from the show having butch concerns, Carrie Mathison could easily be a man, which is one reason why we haven’t had to endure a lot of blather about how traumatised she is regarding the demands of her job interfering with attendance at a child’s school concert, something that is, no doubt and unfortunately, about to change.

6 Responses to “War of the Adult Worlds”