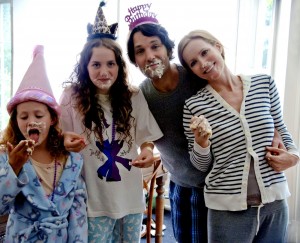 When I went to see Judd Apatow’s This Is 40, it was shocking to note that the film, in the first weekend of its Australian release, was being screened in the tiniest cinema at The Rivoli. When I compared the situation to the circumstances in which I saw Knocked Up (the work to which it is, of course, a sequel) – namely, in a packed and enormous cinema at Hoyts, which stank hideously of popcorn – I was saddened. More than anything, this state of affairs brought to mind for me the music video for Boy George’s ‘Love Is Love’, from Electric Dreams, in which a computer that used to be a pop star (an entirely lifelike scenario in the early nineteen eighties, by the way) ends up abandoned in the street, surrounded by garbage.

At any rate, Knocked Up is, of course, the story of Odd Couple-type odd couple Alison (Katherine Heigl) and Ben (Seth Rogen), who meet in a bar, have a drunken one-night stand (in the movies, a one-night stand is never anywhere near as considered an act as it is in, speaking of the early nineteen eighties, Duran Duran’s masterful ‘Save A Prayer’) and discover that they are to be parents. They are both initially appalled by the news, but for different reasons – Alison is appalled because she has a fledgling career, as an entertainment reporter on television; and Ben is appalled because he doesn’t have a career as anything, except for being one of the creators of a website that proposes to detail nude scenes in movies and that is permanently ‘under construction’. Nonetheless, they decide to forge on with Alison having the baby, with all that involves.

Now, the bottom line for me is that I find myself perpetually prepared to overlook the fact that Knocked Up is not a million miles from Kirk Cameron pro-life-ing it up in Listen To Me. I am able to do this overlooking partly because the film is so relentlessly entertaining but also because any shades of Cameron that are there are due to, I would surmise, Apatow actually trying to keep Cameron and his kind at bay. That is, I recall the friend with whom I saw Knocked Up posing the question of why Alison never considered having an abortion, to which I trotted out Apatow’s standard reply of the time, which was that if she hadn’t had the baby, there wouldn’t have been a movie. ‘Fine,’ my friend replied, ‘but why didn’t she ever even consider having one?’, which was, of course, an excellent point. However, I assume, wrongly or rightly, that we never see Alison considering having an abortion because if she had decided not to have an abortion, which she would have had to do for the sake of the plot, the film could have been turned into propaganda for the anti-abortionist cause. There is also that the issue that because Knocked Up is, spicey though it may be, a conventional romantic comedy that was intended to make a lot of money, it needed to have a happy ending, and this happy ending needed to be Ben and Alison travelling home from the hospital while Ben cracks a lot of jokes. Now, my personal view is that the harmony between them is unlikely to have lasted beyond the end of the freeway but we will never know, because, bizarrely, the sequel to Knocked Up is not, of course, about Alison and Ben.

Rather, This Is 40 concerns Alison’s sister, Debbie (Leslie Mann), and her husband, Pete (Paul Rudd), both of whom featured prominently in Knocked Up as poster children for a relationship that seems to prove the truth of Ally Sheedy’s wholly ridiculous line in The Breakfast Club that ‘When you grow up, your heart dies’, and thus assisted Knocked Up in not being completely unrealistic horse-twaddle. Having got married in the first place because Debbie was pregnant, they now have two children, Sadie (Maude Apatow) and Charlotte (Iris Apatow), both of whom I found repellent in Knocked Up, although I don’t know if this was primarily because it gets on my nerves that Apatow is constantly casting his daughters, given that it is always a mistake for a parent to think that others find their child – unless their child is, say, Bette Davis – as interesting as they themselves do. In This Is 40, though, parenthood looks even worse than it did in Knocked Up, as Sadie has become a rude little beast who really needs to be sent to work in a particularly dangerous mine.

Overall, I cannot help but feel that the extremely talented creative team behind This Is 40 went into the project without much beyond the premise of ‘Hey, let’s revisit Pete and Debbie, given that we can’t [of which more later] revisit Ben and Alison!’. Knocked Up wasn’t exactly packed with twists and turns but it is Inception compared with its sequel. In one way, that concerned me not at all, given that I can usually barely follow plots anyway, and given that the movie is so consistently funny that I was happy to sit back and enjoy the story-unburdened ride. Essentially, Pete now owns and manages a problem-plagued independent record label (is there any other kind?) and Debbie owns and manages a clothing boutique. Both of these businesses are staffed by very entertaining minor characters, and are struggling financially, especially Pete’s record lable – this aspect of the story worked very well, as far as I am concerned, as I thoroughly enjoy tales of people going broke. In other news, Pete and Debbie continually pluck each other’s nerves, and there are subplots involving Pete attempting to resurrect the career of Graham Parker (why not Graham Bonnet, I would like to know?) and Debbie thinking that her ravishingly beautiful employee Desi (Megan Fox) has stolen $12000, not to mention a damned amusing one featuring Albert Brooks as Pete’s appalling, money-grubbing father.

However, it seemed like a terrible oversight to me that not only is This Is 40 not about Alison and Ben, there is no sign of them whatsoever. I can only assume that this was due to Katherine Heigl’s ill-advised one-time bagging of Knocked Up, of which she said: ‘It paints the women as shrews, as humorless and uptight, and it paints the men as lovable, goofy, fun-loving guys.’ Now, I say ‘ill-advised’ not because I necessarily disagree with her – and, as it happens, I admire and respect her patented plain-spokenness – but because Knocked Up is, it appears, the only movie she has made that is not a massive tossed salad of shredded balls drenched in Thousand Island dressing. (For my money, the Heigl vehicle 27 Dresses paints a far more troubling picture of womanhood, given that her character is a staggering bore who has a truly moronic obsession with getting married.) So, I can understand why there was nada involvement by Heigl but whither Rogen? I was not happy at all with the film including a situation in which Pete is having a fortieth birthday party but Ben and Alison are entirely absent. Couldn’t Rogen at least have gone through the motions from a distance, as Frank Sinatra did in such an entirely undistinguished manner in Cannonball Run II? If not, could someone at least have made the point that Ben and Alison were out of town? Their absence made this viewer feel as though there were some fascinating family feud boiling away to which she was not privy.

This is only one of the ways in which the action, such as it is, is rife with unanswered questions.  I suppose I can imagine for myself how Jason (Jason Segel), Ben’s ladykilling housemate in Knocked Up, became Debbie’s personal trainer but how did Jodi (Charlyne Yi), an almost unexplainably weird character from Knocked Up, end up working in Debbie’s boutique? I can only assume that Debbie had thought Jodi was smart merely because of the fact she is Asian. But the big and important question, though, is how Debbie and Pete actually met and fell in love in the first place; this is something that has never been covered in the course of two whole longer-than-average films. I could totally stand some flashback scenes that include nods to Blind Melon and Caesar haircuts if it meant that I would have this information, because, much as I enjoyed This Is 40, it is difficult to cheer for the continuance of a coupling that you’ve never seen in its glory days.

As it is, in Knocked Up, Peter escapes from family life through sneaking off to meetings about fantasy basketball; in This Is 40, he escapes by spending a really long time in the bathroom. In This Is 40, he and Debbie do get away for the weekend and have a spectacular time, but I doubt there any such escapade will be taking place again until their screechy children leave home. Despite all this, This Is 40 has an upbeat ending grafted onto it, and, as we’ve all seen Knocked Up, we know it will merely be a patch before Debbie and Peter return to their daily misery and fight in front of others, as per Burton and Taylor in Who’s Afraid of Virginia Woolf? but minus the sexual chemistry. As Alison pointed out in the earlier film, ‘Every day’s a constant struggle for them because they’re not right for each other.’ However, as Alison and Ben have mysteriously disappeared, no one is there to talk any sense about Debbie and Pete – they themselves occasionally talk sense but, because they are the main characters in, again, a pretty straight-bat romantic comedy that is intended to make a lot of money, they cannot be permitted to keep talking sense, because they would then be unable to stay together.

In one of the most amusing lines in Knocked Up, Pete says of marriage that it is like an unfunny, tense version of Everybody Loves Raymond. To my mind, This Is 40 would have a much cheerier ending if Pete and Debbie didn’t end up staying married, rather than their existence together grinding on till one or both of them dies. But I’ve seen the film described as a love letter from Apatow to his wife, who is, of course, Leslie Mann, which is another compelling reason that there’s no way that could have been allowed to happen.