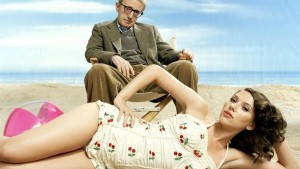 This looks to be a creepy sort of collage (but is there any other kind?)

Of course, given that at midnight 2013 the world clicked over to a new year, there is another Woody Allen movie in current release. And the thing with Woody Allen movies is that, whether they are thought to be any good or not, seeing them never feels like a total waste of time, because at least you can tick off your list having seen the latest Woody Allen movie, even if it has been critically savaged and has the, at best unpromising, title of Magic in the Moonlight.

I saw Magic where else but at the genteel Rivoli in Camberwell (I discovered only recently that the place has a roof garden, by the way) and, as I sat gladly in the heart of Dench country, bore witness to the trailer for The Second Best Exotic Marigold Hotel. In the cinema were seven patrons plus my mother and me, which made me think about how I had also seen Hannah and Her Sisters with the mater, back in ’86. On that particular day, having rashly decided to drop out of university, I had just undergone an interview for a position as an office assistant at a firm of architects. Well, I got the job, and the only pleasure I derived from my days there, between the horrors of cutting off almost every caller when I was in charge of the switchboard and, to widespread disgust, always ordering far too much or too little stationery, was going to soulless North Sydney and buying ‘gourmet’ sandwiches, heavy with camembert, that I could ill afford and that caused me to begin bursting out of my footless tights. Ultimately, I got fired, and I still Google my one-time employers every now and again, in the desperate hope that they’ve gone bust (they haven’t). At any rate, this recollection made me wish I’d seen every Woody Allen film every year they have released since the time I first saw one at the cinema (I think it was Broadway Danny Rose but who the Hell knows?) and recorded my views about the specific film and what was going on in my miserable life at the time, as an easy-to-explain project that would have required little-to-no creativity on my part.

At any rate, in Magic in the Moonlight, a brusque illusionist, Stanley (Colin Firth), operating in the roaring twenties, is roped in by another illusionist, Howard (Simon McBurney), to go to the French Riviera, as it is there that a wealthy American clan are being bewitched by a psychic called Sophie (Emma Stone), and Howard wants Stanley to help him prove she is a fraud. Naturally, though, Stanley and Sophie fall in love, to the accompaniment of a large amount of philosophical talk (and, thus, absolutely no subtext at all that I could determine), and of a huge quantity, even for Allen, of jazz music on the soundtrack (which, I suppose, is understandable, considering the film was actually set in the Jazz Age, as oppposed to, for example, 1979). In other expected developments, the couple at the centre of the action become caught in a rainstorm; and the male half is thirty years or so older than the female, and she yearns to be with him, despite his shortness of manner, and the fact that his competition is a young, rich man. Magic has the customary number of respected actors working for scale (and, indeed, who wouldn’t want to go to an attractive location and get the dope on what it is really like to work with Woody Allen)? Colin Firth, once again, bravely goes against type by playing a repressed British man, and has to utter such combinations of words as ‘the acme of congruity’ (I appreciate four-syllable terms as much as the next person but really.) Emma Stone is as appealing as ever (though this appealingness does not include Easy A, which made me want to see her sizzling away in the electric chair as a fitting penalty for her quirky adorableness), even though she has as little to work with as a Shaker with a flatpack from Ikea.

Now, I realise that the above sounds immensely snide but, believe me, it gives me no pleasure to be snide about Woody Allen, who is, if I work on the basis that the child-molestation business is untrue, someone I admire. (And whatever you think about the Soon-Yi Previn situation, at least it had the happy result of him no longer being able to cast his girlfriend of the day in his movies; I don’t care how talented an actress is, I just don’t want to see a man’s lady wife over and over and over again.) So, and for what it’s worth, when it’s Woody Allen versus the World, I tend to side with Allen, though, to my mind, his latter-day films in particular are always overrated or underrated, so my support flickers like an inexpertly laid log fire. In my personal camp of the Allen overrated, we have, to name a few, the wholly ludicrous Match Point; the nothing-to-it Midnight in Paris (though I concede that it has charm, unlike Match Point); and Blue Jasmine, which was fine but, to my mind, nothing out of the box (though I would rather watch Blue Jasmine every day for the rest of my life than ever again see Match Point). In my personal camp of the Allen underrated, we have, to name a few, Everyone Says I Love You (charming and funny); Small Time Crooks (really funny); Whatever Works (pretty funny); and the not-even-on-at-the-Rivoli You Will Meet a Tall Dark Stranger (which, yes, peters out unsatisfactorily but is also pretty funny until it does).

Now, certainly, all of the above is completely subjective, and who cares what I think anyway? Even I barely care what I think. And the thing with Woody Allen is that it’s basically irrelevant what anyone thinks, given that he seems mainly to continue to make films every year in order, first, to keep himself entertained and, second, to be able regularly to work with young hotties. And the point with an Allen movie is that, with the exception of Match Point, there will always be at least one lovely performance and/or line, whether funny or otherwise, to carry away with you, like a red and green cellophane bag of lollies from a children’s party in Australia in the nineteen seventies, as in Magic when Stanley’s aunt, Vanessa (Eileen Atkins) says, ‘What doesn’t kill us often knocks the hell out of us.’ These kinds of pleasures are simply not to be found when, for example, Charlie’s Angels is taken from the small screen to the big (and I am no snob, and I love the small-screen Charlie’s Angels, but I fully expected that witless, supremely lazy film to signal, not only the death of the cinema but, feasibly, the end of the world).

Now, as Woody Allen is seventy-eight years old, does he ever think, Nixon-style, when the critics are frantically damning rather than frantically praising, that soon he won’t be here to be kicked around anymore? Well, who knows but, on the other hand, as both his parents lived till they were, literally, about a hundred, it’s possible we’ll all be cranking out our irrelevant viewpoints on his new works for the next twenty years. And I, for one, would love to think that this would be the case. I was struck when watching, on what’s left of the ABC, Brilliant Creatures, the excellent documentary about Germaine Greer, Clive James, Barry Humphries and Robert Hughes, by a few things: not least of these was that, out of the four, Hughes was easily the one you most wanted to murder, and that whether the lack of a two cents’ worth from Richard Neville meant he’d been trapped under a tractor somewhere.

Most of all, though, with Hughes being dead and James, very sadly, and if recent reports are correct, not far from that state, how awful it is to think of them all being deceased, both because we will miss them and because of what it means in terms of the passing of time for all of us. I mean, at the point that I became aware of James, when I first read Unreliable Memoirs and he seemed permanently to be appearing on one of Michael Parkinson’s approximately eight thousand television shows, he was the age that I am today, and now look at both of us. Of course, I can comprehend that it always has been, and always will be the case, that one day everybody from a particular generation, including your own, and even its giants, will be dead, but it’s a hard thing to accept. Trying to accept it makes me realise how much I do want to continue to hear Woody Allen’s characters pontificating about life and death, and whether there’s a god and whether there’s magic. While I’d be the first person to argue that it might have been better if he had only made a film even every two years, perhaps he had to get the bad ones out of his system to make the good ones. And while the regularity of the films may not always improve them, it always makes them milestones.