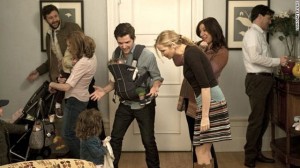 Note O'Dowd: his accent was variable, by the way

A fusillade of noncommittal reviews was hardly going to stop the likes of me haring off to the Jennifer Westfeldt-written-and-directed Friends with Kids, and this was even though I have, perhaps uniquely, seen the other two films that Westfeldt has written: Kissing Jessica Stein and Ira & Abby. Stein concerned, natch, a New York copyeditor who, after a lot of poor-quality blind dates with men, decides to go all ‘me and my gal’ with an attractive young woman who works in an art gallery, having been impressed by this individual’s use of a Rilke quote in her personals ad(!). I recall that, back in the day, Stein was quite popular with white-collar women who lived in Sydney’s eastern suburbs and were tired of being single, as it reminded them of the possibilities inherent in bisexuality, something for which, in earlier times, even the Peter Allen tune ‘Bi-Coastal’ had not managed to start a craze. I saw Ira & Abby while staying with friends in the United States, and pretty much all I can remember is that we walked out of the cinema into a picturesque Connecticut street with murder on our minds because Westfeldt’s character, the kook(ier) half of a ferociously NY variety of odd couple, was so very annoying. Abby annoyed my friend because she stupidly did cute talking-back to a mugger on the subway, and Abby annoyed me because she was still pals with all her ex-husbands, due to the fact she was such a terrific person. Nonetheless, I had long had an appointment with myself to attend Friends with Kids, as I’m not the kind of human who can resist a movie that contains a reference to a timeshare in the Hamptons. After all, when I read Vanity Fair magazine, I like to think that, somehow, its subjects and I are one and the same, with identical concerns.

I find that when I go to see a screen comedy these days, the shorts have one dependable motif, and that is an I-served-up-my-own-sick-in-an-omelet level of what I can, like an evil old bag in a costume drama who wants young people to marry solely for money and ‘position’, only describe as vulgarity. In the trailer for the Adam Sandler flick That’s My Boy (which, it seems, he’s squeezed in before doing the four most recent films he has on the trot, which include Grown Ups 2 and Valet Guys), he swallows a health-spa concoction, only to announce ‘This tastes like dick infused with balls!’ Then there was the Rock of Ages promotion, in which it is flamboyantly announced that someone threw up on someone else’s lap. Finally, we had Ted, in which a large teddy bear simulates fellatio. I thought we’d be heading down the same road with Friends with Kids (FWK), when there was an observation early on that it was so long since Julie (Westfeldt) had been laid that she must have cobwebs in her vagina; however, this was not really the case, unless, that is, it was the case, but it had no impact on me because I’m even more desensitised than I realised.

FWK concerns Julie and Jason (Adam Scott) observing their pals turning into shrieking harpies and sulky layabouts once they have children, and deciding to avoid this fate themselves by having a baby together but doing so without being romantically involved. I don’t think I exactly need to insert the words ‘Spoiler Alert’ before letting drop the information that Julie and Jason become romantically involved with other people – respectively, a rich-seeming, mild-mannered fellow called Kurt (Edwards Burns); and a dancer (or ‘pony’, as I shall insist on calling her, a term that I believe I picked up from, without ever actually having seen it, A Chorus Line) called Mary Jane (Megan Fox) – but end up together, after a suitable period of no suspense at all, following Julie having told Jason that she’s madly in love with him. Incidentally, there are, as well, the atmospherics one would expect in a Big-Apple-addled motion picture – namely, accessible jazz music on the soundtrack and the standard-o-roso shots loving shots of Central Park post zero tolerance; but, controversially, no bums being accidentally given a hundred bucks and declaring ‘I love this town’!

While I quite enjoyed this film, especially the scenes in which supporting cast members John Hamm, Kristen Wiig, Maya Rudolph and Chris O’Dowd have big rows with each other, it had aspects with which I took issue. For example, at one point, someone announces, ‘We’re pregnant’, an expression that I find so extremely irritating that I can never hear it without wanting to decapitate myself – the male half of the couple in question is really going to be forbidden to drink alcohol or smoke cigarettes for nine months, and be getting his body into gear for the equivalent of being torn apart by wolves, is he? As well, I really doubt that the kids of today scream with joy at, and are easily gotten rid of via, the prospect of watching a Thomas the Tank Engine DVD – I had been under the impression that all those between the ages of about two and sixteen are busy being ‘groomed’ on the internet and ‘sexting’ each other. All this aside, though, I would like to say exactly how much I admire and respect Westfeld’s big clanking balls in writing a movie in which Megan Fox gets dumped in preference to a character played by Westfeldt herself. This is especially so considering that Fox’s character not only looks like Megan Fox, but has, we hear, been the driving force behind the best sex of Jason’s life, not to mention being intelligent and pleasant company. As definitive evidence of this last aspect of her character, she demonstrates a competence with video games, which, I know from films and TV, is, along with a familiarity with the Knicks (whoever they are), the way to a heterosexual man’s heart.

However, and despite months of he and Mary Jane getting along perfectly well, Jason drops her, and the catalyst for this is that that they go to an expensive restaurant for dinner and she quietly voices to him her objection to a passel of screaming brats being seated at the next table. Now, in the opening scene of the film, Jason himself is presented as one of those nutty nuts who doesn’t want to pay hundreds of dollars merely to spend his time being driven mental and reminiscing about olden times when the only meal a child ate at a dining table that wasn’t in their own house was a junior portion of Steak Diane and cheesecake at a Black Stump. However, things are different for Jason now that he has someone who will eventually call him ‘Dad’ and, rather than giving a civil answer to Mary Jane, he has an avuncular conversation with these toweringly selfish creatures, who, in the spirit of noble experimentation, explain gaily to him that they ‘thought we’d try it’.

Now, the fact is that Westfeldt is in a long-term relationship with Mr Jon Hamm and, I was intrigued to note, this talented and photogenic pair don’t appear to be married with children. This situation struck me because, first, it goes some way to explaining the almost total painlessness of parenting for the character whom Westfeldt plays – Julie and Jason’s baby is generally less trouble than a lava lamp. Second, though, I found it surprising, as I had been assuming that FWK – with its message that Julie and Jason, in wanting to keep romance in their lives, had misunderstood what true romance really is – was a result of Westfeldt doing what I call going ‘de Brito’. That is, following a similar path to columnist Sam de Brito and living a life devoted entirely to pleasure until reaching middle age, and then parenting a child and producing endless screeds on the profound effect this has had on him and about the great love he has for the child, as well as tweets that posit such questions as whether he, de Brito, should spend his time reading the nasty comments that have appeared under his latest blog or watch his child sleep. Aside from the burning ‘But who gives a stoat’s autobiography?’ factor, are these really his only options? If so, he should move out of the environs of Bondi immediately.

By contrast, having fathered six children had no such effect on the brilliant Evelyn Waugh (he preferred to visit his children no more than ‘once a day for 10, I hope, awe-inspiring minutes’); and, when it comes to the transformative effects of parenthood, there is always the father in Seven Little Australians to consider. Of course, both these examples do hail from the grand old days of people not being under the impression that their love for their children qualifies as exciting information that must regularly be shared with an interested world.

Basically, I’m never convinced that an apparently selfish citified type having a child and finding this child absorbing is proof that they’ve really grown tremendously as a person, because devoting time and efforts to your offspring – while it is, I’m told, extremely demanding – isn’t invariably a selfless act. I would say that, if anything, transferring some attention from yourself only to redistribute it to a newer edition of yourself, and use this as an excuse to talk about yourself even more and bring public attention to what an awesome person you’ve therefore become, is, surely, an egomaniac’s dream.  I feel a little jealous of Julie and Jason when I think that they will have all this and eating out too. I am, on the other hand, a good deal less jealous of them than I am of Jennifer and Jon.

4 Responses to “Pulling on the kid gloves”