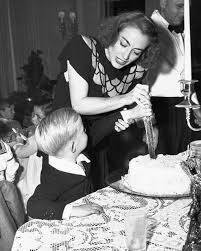 A good time being had by all with Joan Crawford

When I announced that I was going to see the Garry Marshall film Mother’s Day because I had the feeling (yes, I know I’m psychic) I was going to want to write something about it, a friend pointed out that it was therefore my duty to see Marshall’s other calendar-driven movies, Valentine’s Day and New Year’s Eve. I replied shortly that, given no one is paying me to write this thing, there was simply no possible way. I then swept off to the Elsternwick Classic for a Monday matinee, and was surprised to find the joint jumping. It turned out, though, that pretty much everyone was there for the Holocaust Film Series, which I can well believe would have been less depressing viewing than the flick I had just handed over money to see. Now, Marshall already has many attackers (someone called PunchUpAtAWedding is currently posing the question ‘biggest hack of all time?’ on IMDb’s message board), so, yes, it seems redundant for me to join in. However, his latest big old Frankenstein’s monster really is a brain teaser; while Mother’s Day could not have been less difficult to understand in terms of following the developments on screen, I still emerged from it in a state of confusion.

In fact, my state of confusion began back while watching an advertisement for Monash University that featured David Wenham pacing around and talking about questioning the status quo. Wouldn’t any potential student be better off questioning whether this advertisement is really the best use of the institution’s, no doubt dwindling, funding? Wonderment replaced confusion during the trailer for Me Before You, a film about the romance between an attractive young paralysed man and his carer, prompting the thought of how very unpleasant it must be to be trapped in a wheelchair at the mercy of a free spirit.

The wonderment continued when Mother’s Day kicked off with a voiceover that sounded like Garry Marshall himself impersonating a woman talking about the challenges of motherhood, but that was the last moment of interest. I can barely bring myself to discuss the ‘characters’, or the ‘plot’, with every development rearing up from a great distance, like that truly disgusting statue of Mr Darcy at Rippon Lea Estate. Suffice to say, there is a storyline about a dead mother that features the widower needing to have awkward talks with a child about puberty-related matters (including this adult man’s double-take at the mention of tampons); and tearful visiting of the graveside, making the viewer wonder why dead parents in movies never seem to get cremated. There’s Jennifer Aniston, wearing workout gear all the time, and smiling through her tears because she fears being replaced in her sons’ affections by her ex-husband’s much younger second wife (though as these boys give her potatoes with faces painted on for Mother’s Day, I fail to see why she cares). There’s Julia Roberts playing someone who seems to be either a home-shopping magnate or a famous author, flashing her ‘megawatt smile’ and resembling no one so much as the shark from Jaws in one of its frenzies for blood. There’s the widower coaching children to play sport, there’s a wedding, a school concert, a serendipitous trip to the emergency room, a sassy black childminder, nuns on treadmills, and a cantankerous midget who runs a bar. Now, the only shock in all this is that apparently three human beings were thought necessary for the writing of the screenplay and four to devise the story, rather than, as I had assumed, the script having been outsourced to a crack team of Juliette Lewis’s character in The Other Sister and one of those dolls that functions as a toilet-roll cover.

I’m sure it will surprise no one to hear that Mother’s Day is a film entirely without subtext. For example, Kristin (Britt Robinson), who was given up for adoption (by the filthy-rich Roberts character, in a scenario of which the rest of us can only dream) and is unsure if she wants to get married, shows she has no need for In Treatment’s Dr Paul Weston as she announces: ‘It’s the divorcing that scares me. I love Zack but there’s a reason I’m afraid of marriage. I have no idea who the hell I am … I have abandonment issues.’ In case things had not been made quite plain enough for the viewer, Jesse (Kate Hudson) observes, ‘You don’t even know your mother and she has this power over you?’ Furthermore, the two actresses, understandably, speak these preposterous lines as though English is a foreign language to them, reminding me of the time in Borgen when terse spindoktor Kasper was holding a press conference and made a joke that referenced Limp Biskit.

However, the viewer finds herself looking back with nostalgia on that exchange once Randy the Clown starts dispensing wisdom to Sandy (Aniston) after a children’s birthday on the level of the ones Joan Crawford use to throw for that ungrateful Christina. Suffice to say, this includes a prediction the accuracy of which Randy could not possibly have the faintest idea, namely: ‘There’s no way the bond you have with your kids could ever be broken.’ I was still getting over that when Kristin’s boyfriend, a struggling young comedian who is so handsome and has such bland comic material it was impossible to believe that he had not already taken the world by storm, wins (SPOILER ALERT!) a stand-up contest because, in a wholly predictable turn of events, he has to take his and Kristin’s baby (who, incidentally, looks like a small Clive Palmer) onstage, and says things like ‘Being a dad changes you. I don’t know about [list of kid-related things]. But a mother does. Because in every atom of their bodies, they know what’s right for their families.’

All the things I mention above are, of course, at the root of everything I will probably never know or understand about Mother’s Day. First of all, did the actors get together over a drink at the end of every shooting day and take the opportunity to debrief about having to say and do such things? If not, why? And why do big stars agree to be in movies like this? They must have known from the second they heard about it, let alone read the script, it would be awful; it’s not like it’s a noble misfire. Trust me, I’d do pretty much anything for money as well, and I’d like nothing more than to be eating gold-chunk ice-cream, with a solid-gold spoon, out of a solid-gold carton, and wiping my face with a gold-leaf napkin, but Mother’s Day is a film that makes the extinction of the human race seem an idea that has been too hastily dismissed. And, worse than that, being in a movie is so damn public. Just imagine you’re so rich and famous that you have no need to appear in Mother’s Day and yet have put yourself in the position of having to have to talk it up to the world, and of having to watch your friends and family struggle for something to say after seeing this pastel mess.

And then there’s the question of who the Mother’s Day fans could possibly be; yes, it has them. One writes on IMDb: ‘If you are super critical and everything offends you easily, this isn’t the movie for you.’ Hell yes, that’s a thumbnail portrait of my good self, but it’s incredibly difficult to determine what kind of person could actively like this movie. Puzzlingly, there is a storyline about cracker parents rejecting their Indian son-in-law and their other daughter’s lesbian relationship, but surely the only people stupid enough to like Mother’s Day would have to be stupid enough to be homophobic racists themselves? And, of course, there are no surprises at any time; the only way the viewer could feel surprise would be if there had been any surprises. Geez, no one’s life has the level of closure that is to the fore in Mother’s Day, and I can’t believe I’m the only person who finds this contrast profoundly distressing, as opposed to heartwarming. The point is, though, audiences enjoy surprises and there’s actually no reason you can’t have some in a commercial movie like this.

Marshall’s Pretty Woman is a movie that I personally have violently detested for twenty-six years now, and that didn’t work on any level, except that it happened to be a huge hit. However, that was because much of womankind is in love with the idea that they’ll meet a captain of industry who isn’t a son of bitch and who’ll want to chuck a lot of money their way, even though it’s empirically impossible to be a captain of industry without being a son of a bitch. Furthermore, there was the stroke of, what I must reluctantly call, genius, of including a scene that features the heroine triumphing over a stuck-up shop assistant, which is probably the chief ambition of not just womankind but all humankind. Zeroing in on these two failsafe concepts, and filtering them through just the one bullshit story, as opposed to several of them, was how Marshall got away with making a film that he seemed to have directed by setting a timer on a camera then going to lunch.

Mother’s Day ends with ‘bloopers’ played over the end titles, presumably to delay the anticipated stampede to the exits. In one of these, Julia Roberts is shown having to sit and look melancholy while a train passes by, then breaking character to say, ‘That’s one really fucking long train.’ I, for one, have never felt as warmly towards Roberts as I did then, and it made me think about how the really sad thing is that there probably wasn’t a single stupid person involved in working on Mother’s Day. And yet it is a film whose only good reason for existing from the audience’s point of view is to offer them shelter from the elements (as when friends of mine went to The Family Stone to escape a heatwave, though, I’m sorry to say, the cinema’s air conditioner broke down). Garry Marshall has been involved in enough high-quality work (to name only a very few examples, The Odd Couple, The Dick Van Dyke Show, and Lost in America, in which, for my money, he gives one of the greatest comic performances of all time) to well and truly demonstrate he has first-hand understanding that something can be a mainstream hit, with nothing particularly ‘challenging’ about it, and still be superb. Yes, I realise that Marshall’s eighty-one years old and it’s not like he’s the future of the entertainment industry, so, you may ask, who cares? But the big problem is that assuming everyone else is more stupid than they are does seem to be the future, as well as the present, of a large sector of the entertainment industry. Yes, we people will take what we’re given because that’s what we’re given and we crave diversion, but you would be surprised at all the things we like. There is simply no need to subject us to something like Mother’s Day; how is that a happy ending, for anybody?