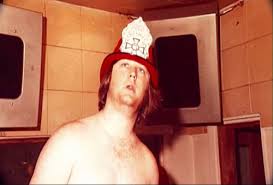 I thought I could not be more astonished than I was when I heard John Cusack was going to be playing Brian Wilson in the biopic Love & Mercy, but then I started to read all the favourable reviews of this seemingly doomed enterprise. Believe me, though, it was not that I was gunning for the film. I’m crazy about showbusiness biopics; I’m crazy about John Cusack, who, as readers may be aware, has been my imaginary husband since 1985; and I’m crazy about Brian Wilson, who is, of course, notoriously crazy himself.

Now, the first I ever heard of The Beach Boys was back when, as a child in the nineteen seventies, I would hear the bearded uncle of a friend constantly playing their hits – ‘Barbara Ann’ and so forth.  My memory is that he would do this while playing a primitive electronic game of tennis in which the racket was merely a green line, but I’m probably mixing this up with something that came later, at a time when it was much clearer that machines would one day control our lives. I don’t recall thinking of the band again until 1990, when I watched Summer Dreams: The Story of the Beach Boys on television.  I just watched it again – with, I think, German, subtitles – on YouTube, and was in no doubt as to why it so firmly captured my imagination twenty-five years ago.

I knew I was in good hands from the second it started and the announcment was made that the music in the film was not performed by The Beach Boys. In the case of either a biopic or documentary, it seems to me that a certain je ne sais quoi is added when the makers are operating under the restrictions of not having permission to use the original music of their subjects.  Nonetheless, we are left in no doubt as to the inspiration for certain songs, as when Dennis Wilson (Bruce Greenwood) announces that he himself gets around, or Brian (Greg Kean) moodily shuts himself in his room. Best of all is when Mike Love (Casey Sander) remarks bitterly, ‘She’ll have a little fun till her dad takes that T-bird away,’ about one of Dennis’s paramours.

The story proceeds in the way that anyone with an interest in the history of The Beach Boys would want, and I list only a few of the highlights here. Genius Brian becomes ever more enthusiastic about drugs and the pleasures of the table and, when coming up against his stick-in-the-mud bandmates/relations, states firmly, ‘All I get from you guys is negative vibes.’ There is Dennis ‘balling’ countless chicks and making the point that he is the only one of the damn lot of The Beach Boys who could surf, and a tiny-shouldered Charles Manson (Michael Reid MacKay) wasting no time when meeting the youngest Wilson in floating his theory of the strong likelihood of a race war. Everyone grows beards that become ever bushier and more false looking, especially Mike Love, and particularly  when he sourly sits in front of the TV, watching Jimi Hendrix at Monterey. It is Love, too, who teaches us the invaluable lesson that no one should ever wear a three-piece suit with a fat tie and a flat cap, as Mike sees fit to do at the funeral of the Wilson boys’ reprehensible father, Murry (Arlen Dean Snyder).

Well, I hope it is obvious why all this grabbed me and, back in the day, I spent a lot of time wondering whether, if I could have been born twenty-five years earlier, in California, and married him myself, I could have made Brian’s’s miserable life happy, though it’s far more likely that I would have made his miserable life more miserable, as pretty much anyone I’ve gone out with would attest. I liked how courteous and pleasant he was, except when pushed beyond endurance by meatheads and/or sadists, or when having a psychotic episode. This strong liking for Brian led me to buy and listen obsessively to Pet Sounds, the soaringly perfect album that is like hearing a heavenly choir that is in psychological hell but has had the benefit of snappy production, and all I can say is that it, and a song such as ‘Heroes and Villains’ from Smile, make The Beatles sound like a pack of try-hards, and I love The Beatles. Yes, certainly, the Englishmen were taking a bollockload of drugs too, and John Lennon was pretty much round the bend, but there is still an overlay of Northern sensibleness to the four, as though it’s a toss-up for them between having a chip butty and a nice cup of tea or going all experimental. The Wilson oeuvre, on the other hand, is, of course, the loving offerings of someone who was genuinely out of his mind, and who, just in case he wasn’t already nuts enough, made the interesting choice of dropping vast quantities of acid. And then there is the fact that Wilson was born and bred in Los Angeles, with all its extensive creepiness, which meant – instead of being able to live in the orbit of cosy old red buses, tea rooms and the royal family – having to dwell isolatedly in canyons, with the excellent probability that the aforementioned Charles Manson would turn up for dinner and start nagging for a record deal.

At any rate, Love & Mercy, as does Summer Dreams, gives a nod to Brian’s Piano-in-the-Sandpit Years, and The-Staying-in Bed Years. And it shares other motifs – in particular, regarding the villains of the piece. The biggest difference is that Summer Dreams sits more on the fence regarding Wilson’s latter-day mind-controlling therapist, Eugene Landy (Paul Giamatti, apparently enjoying himself no end in a terrible wig), presumably because he was still alive at the time. Murry (Bill Camp), though, is at a comparable level of bastardry, sitting on the sofa in pyjamas and a bathrobe, while swigging a whisky, smoking a pipe and making passive-aggressive – or, rather, aggressive-aggressive comments – to the young Brian (Paul Dano).  Then , too, there is Mike Love (Jake Abel) wearing, naturally, increasingly stupid hats, making cracks about Brian’s weight and questioning his every creative decision. I must say, it is reassuring to know that whatever violent disagreements the people of the world may have with each other, everyone, not excluding his relations, is apparently at one in their hatred of Mike Love. Even in footage from the period that things for The Beach Boys were at their sunniest, the frugging of the real-life Love puts a damper on proceedings, and I’ll be haunted till I die by footage of him in a beard, flat cap, loud shirt and white trousers, mincing across a concert stage circa 1990.

Of course, the huge risk that Love & Mercy takes is to have two different people play Brian Wilson. One of the reasons it works, though, at least as far as I’m concerned, is that the bowlcutted young Brian Wilson looked pretty much nothing like he did when he was older (i.e., like Barrie Unsworth) and was also far more resolute in his manner. The only criticism I would have is that they should have done some Behind the Candelabra-style fake-hand wizardry when Cusack had to hit the keys, as it was distracting not to see his fingers when he was supposedly playing the piano and thus know that he was not. However, unlike Summer Dreams, the watching of which is on a par with seeing the Christmas windows at Myer, Love & Mercy manages to give you some idea – or, at least, make you think you  have some idea – of what it must have been like to be a musical genius who had a gothic childhood, and psychological problems exacerbated by a fairly staggering drug addiction. (And speaking of geniuses with psychological problems, it kills me that Katherine Heigl will, presumably, never play Sylvia Plath, as there could be no more perfect casting, given her physical similarity, with her towering Germanic/All American prettiness, and the way that her strange intensity in Grey’s Anatomy often outclasses the material). Dano’s young Brian is, as one would expect, courteous except when he has to deal with complete bastards and admirably decisive in the recording studio, while Cusack captures the older Wilson’s air of intelligence fighting its way through a fog, his eccentric charm and the little-kid sweetness that only someone who is not, in fact, a little kid but a grownup kook can have.

At the very least, Love & Mercy does a great job of demonstrating how – while, admittedly, Wilson’s story is an extreme example of the phenomenon – being a very famous person is so often all about getting ripped off by the people who are supposed to be helping you, and about being surrounded by an entourage and exactly what a freaking drag that would be, especially for the person who is attempting an intimate relationship with the particular celebrity. And what worries me is that biopics like Love & Mercy are surely an endangered species, as there’s maybe no other type of film that so blatantly asks for trouble. I mean, if you don’t know or care about Brian Wilson, why would you go and see it? And if you do know and care about Wilson, you’ll be picking holes in it like a nasty old termite. And the thing is, if no one had made Summer Dreams, whatever its faults, I doubt I would have had all the pleasure I’ve had these many years from The Beach Boys (The Good Beach Boys, that is; not The Evil Beach Boys, à la John Stamos on drums and ‘Kokomo’). Yes, that isn’t the point at all in one sense, but, in another sense, it might be the most important point of all.