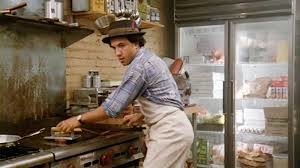 As everyone knows, the Christmas hols can be slim pickings at the cinema if you’re not trying to keep a gaggle of little children entertained, which is why I felt the urge to lose myself in the tale of a lady who invented a mop. I’ve got to be honest, I tend to prefer more glitz and glamour when it comes to my inventions, and I think I am not alone in wanting more of a Caractacus Potts situation. However, off I staggered to David O Russell’s Joy, the story of entrepreneur Joy Mangano (Jennifer Lawrence), because there are worse things to do in the week of New Year’s Eve than go and see something that is at least intended to be inspirational, and that has gratuitous references to Christmas, even if being exposed to such references from Boxing Day onwards is, frankly, depressing, as it makes me think only that the lucky fictitious people I’m watching have their INXS-in-the-eighties-decadence-level lunch and unwrapping of presents all ahead of them while I must wait another year.

But, speaking of luck, on this particular morning the Elsternwick Classic had a Supremes compilation on constant rotation, making me recall fondly the days I spent absorbed in J Randy Taraborrelli’s masterful Call Her Miss Ross, which was only exceeded in personal entertainment by the time I spent absorbed in Taraborrelli’s masterful Michael Jackson — The Magic and the Madness (not to be confused with his Michael Jackson — The Magic, the Madness, the Whole Story), and my sudden enjoyment of life at hearing these grand old tunes was in no way hampered by ‘Stop! In the Name of Love’ getting stuck for some seconds. However, my enjoyment was hampered once I entered the cinema and saw the trailer for the film Sisters, which looks fucking horrendous – yes, maybe it will turn out I am wrong about this but, frankly, I doubt it. Then there was a Qantas advertisement featuring a not especially attractive family group, and then an advertisement that turned out to be preaching against violence to women, though for most of its running time I was under the impression that it was preaching against getting tattoos. Relatively soon (that is, relative to seeing anything at Village and its kind), though, the beginning of Joy was heralded, and we all settled down, with the exception of an old woman who exited the cinema immediately, closely followed by an old man, neither of them to return.

Proceedings kicked off with a caption mentioning inspiring women, which meant that I waited, in vain, for the customary photo of Amelia Earhart standing next to an aeroplane. Then I got another surprise when Robert De Niro appeared in the role of Joy’s father, as I’d just assumed he would have been busy prostituting his talent in Love the Coopers, which, it turns out, he wasn’t actually in. Having recovered from this shock, my thoughts turned to how Jennifer Lawrence is unique in managing to be a good actress despite the fact her face is as expressionless and smooth as a Kabuki mask. So, and not for the first time, she both looks and seems too young for the part she is playing — in this instance, of a plucky, inventive single mother like Erin Brockovich (though, at least as played by Julia Roberts, Brockovich was, it seems, a big ol’ bitch on wheels almost all of the time).

For the first forty-five minutes or so, before the film settled down into a more pleasant rhythm, I found Joy to be a whirl of so much music on the soundtrack and general quirk that I felt as exhausted as an ingredient in a Boost Juice smoothie and wanted to cry for mercy. Back and forth it zips, like a skilfully driven dodgem car, between scenes from childhood; of Joy’s grandmother uttering inspirational comments (not something either of my grandmothers ever did, though one of them did donate to the victims of Cyclone Tracy her dresses that had ‘gone under the arms’); of Joy meeting her husband, who wants to be the next Tom Jones, reminding me, out of the clear blue sky, of Richie the kitchen hand who is an aspiring comedian in Flashdance; heavy handed soap opera parodies; the plumbing having burst and Joy having to deal with it; Joy and her husband, in happier days, appearing in a musical; and then back to unhappier days, with the two of them being divorced. Joy at this point not only looks like it’s been shot through a used teabag but is an uneasy mix of kitchen-sink realism and whimsy, like Saturday Night and Sunday Morning as directed by PJ Hogan, with Baz Luhrmann in an advisory capacity.

Then, thankfully, Joy invents her goddamned mop, gets on board with a shopping cable network and achieves great success. However, this success is only achieved after setback after setback, and then, just when the viewer thinks there can be no more setbacks, yet another setback, and all of them are to do with massive debts, dodgy suppliers, and, in a refreshing change from the expected sentimentality, the astounding uselessness of her family members. And, I must say, I very much admired Joy’s persistence and moxie, even as part of me was coming on all old communist and thinking, ‘Well, all she was doing was getting rich and, no doubt, eventually expecting her staff to be grateful she’s even paying them a wage, which is how all business owners get like eventually, let’s not kid ourselves.’

However, the first days of the New Year are, I believe, always an especially germane period to think about the whole concept of persistence. Since I became old enough to see further ahead than whatever day I happened to be living through at that particular moment, I’ve thought a great deal about the question of when is the right time to give up on something. Now, I give up on things extremely easily myself, and have always belonged firmly to the category of those who watch soap operas and let life go by, which is how Joy, at one impassioned point in the film, sums up her mother’s general approach. Essentially, if I’m not instantly competent at something, I won’t persist with it, and there’s a strong argument to be made that I’m barely – let alone instantly – competent at anything, so just imagine how many pursuits I’ve given up on.

The thing is, though, that when I was at a formative age, my mother worked at the Australian Writers’ Guild, which meant that I was not infrequently exposed to people who should have had a back-up plan beyond writing for a living, and that was back in the fine old days when you could live in the inner city of Sydney for practically nothing. This life experience is a big part of why I go quite crazy whenever I hear those who have won the Lottery of Life by becoming, for example, massively successful entertainers, get on their expensive high horses and preach against having backup plans, because if a person has a fallback, he or she will fall back on it too easily and end up as a working stiff.

Yes, I personally feel strongly that, certainly, everyone should persist with their creative outlet if they have one, on the basis that even if only you and/or one other person is having life enriched in some way by something you’ve created, your pursuit has more than done its job. As well, in terms of acceptance by those people and institutions frequently referred to as ‘cultural gatekeepers’, while it’s always been the case that if anyone had the slightest idea what was actually good or of what people would like, far less terrible shite that everyone hates would be professionally produced, published, and so on, it’s now also the case that the gate has largely crumbled away, meaning we are all able to share our work with the world. Having said that, however, while the CGs can no longer stop you being heard, they are usually the holders of the purse strings (such as they are), so it’s also very handy to have a way to earn a living over which the GCs have no control, and so minimise as much as possible their power over you. But I certainly don’t mean going to filthy old law school, or anything of that time-consuming and expensive nature – I just mean planning for some kind of alternative or additional career that you won’t completely hate having to do every day if you need to, and that will enable you to avoid constantly having to buy and eat Homebrand sausages that are close to their expiry date. And, yes, yes, no doubt you can give me countless examples of celebrities who didn’t need the Plan B, while I can’t give you countless examples of people who should have had a Plan B, but that’s only because none of us has ever heard of them.

Having flown the flag for being pragmatic, though, I continue to think that risking too much is still, at the end of the day, preferable to risking too little. People who stay in jobs, or any other situation, they hate and never get around to doing what they always wanted to do (and, yes, I’m well aware that a lot of people have grave responsibilities or, for whatever reason, have no choice but to stay put, but there are also a lot of people who don’t) need to remind themselves that their time on this earth is short, much as watching Revolution with Al Pacino might make them think the opposite. I’m a big fan of baby steps, and would merely say that if you don’t like your job, at least just look at the damn job ads every day, and that if you want to, say, write a book, make yourself write a paragraph a week – anyone at all can do such things. And, whatever else it may be, Joy is a handy reminder that often we need to make ourselves worse off if we’re ever going to make ourselves better off.