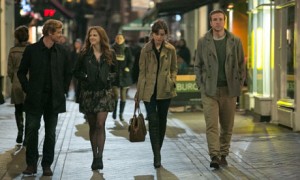 My viewing of Dan Mazer’s new film, I Give It a Year, was preceded by the sight of a hugely muscular patron demonstrating that the business of buying a cinema ticket via your mobile phone and then having the usher scan your phone to enable entry to the cinema is not nearly as straightforward as it looks on the cinema’s own advertisements; the playing of the song ‘Electric Dreams’, which, as ever, I enjoyed, partly because I find the lines ‘the friendship that you gave/taught me to be brave’ to be rather touching; and an outing of that noisy old Great Gatsby trailer, yet again The foregoing, except for ‘Electric Dreams’, made me feel as though I were being punished for something, which was fitting, as I Give It a Year is the type of picture about which a person tends to feel shame at seeing — namely, it is from that least ‘credible’ of genres, the modern-day romantic comedy, and hasn’t even had the type of enthusiastic reviews and massive box-office returns that make it one you can justify seeing on the basis of needing to be in touch with the Zeitgeist. I have said, many times, that I always have at least a base-level enjoyment of any work that concerns the ups and downs of a relationship conducted in a nice hunk of real estate, so I, personally, am always glad to go and see a romantic comedy but am also a pathetic coward about what other people might think about me doing so, which is why I can never look in the eye the usher who is pulling my ticket.

At any rate, Year is, of course, the story of a couple, Nat (Rose Byrne) and Josh (Rafe Spall), and what happens to them after they exchange wedding vows – that is, after all the action that is generally the stuff of romantic comedy is done and dusted. Josh is a writer of books, who is overly laissez faire about dreary chores such as emptying rubbish bins; and Nat is highly groomed, and is what would once have been referred to as a ‘career girl’, with her job in advertising, which, hark at this, is on the client-services side, not even in the ‘artier’ field of copywriting. Their basic incompatibility is thrown into particular relief for them by the presence of Nat’s American ex-girlfriend, Chloe (Anna Faris), an easygoing foreign-aid worker; and Nat’s ‘I’ve just walked from the pages of a ludicrous photo spread in the Melbourne magazine’-style American client, Guy (Simon Baker).

Now, at the beginning of Year, I was apprehensive because of its immediate resorting to a damnable old Working Title standard – namely, things going wrong at a wedding. That is, the vicar coughs a lot, which interferes with Nat and Josh exchanging their vows; and the best man, Danny (Stephen Merchant) makes a whole lot of inappropriate comments while those around him cringe. However, by the end of Year, I was able to conclude that I had not minded the film at all. But, listen to me, I am not encouraging anyone to see it, as I can’t think of a single person I know who would actually like it. However, if you, say, lock yourself out of your house and need to kill ninety-seven-plus minutes, there have been movies that are more annoying and boring than Year, and there is even a possibility that seeing it will put you into a better, rather than a worse, mood.

Now, a lot of people have been ragging on Year and I attribute this – at least, in part — to a general hostility towards Working Title. Yes, this production company has had a hand in films – such as The Big Lebowski, Fargo and Tinker Tailor Solider Spy – that people love to love. However, I am willing to bet that what first comes to mind when people think of Working Title is romantic comedies that are set in an unfeasibly un-Mike-Leigh-film-ish-looking London and have Americans in them, as well as extremely hideous soundtracks: to wit, Four Weddings and a Funeral, Notting Hill, Love Actually and Wimbledon. And, certainly, I understand why people are hostile to these pictures because, to varying degrees, I too am hostile to them. Four Weddings is one of those movies, like Reality Bites, that seemed quite good when I saw it at the cinema but upon any subsequent viewing revealed itself to be just awful; Julia Roberts, due simply to the fact that her presence in anything makes me recall the existence of Pretty Woman, throws a big fat spanner in the works of Notting Hill’s tolerableness (one of my most treasured television-watching memories is seeing Oprah Winfrey saying to Hugh Grant that she thought ‘Julia’ was the nicest person in the world, and Grant involuntarily assuming the expression of a judge at the Old Bailey and replying that he wouldn’t say that, exactly); I feel strongly that anyone who likes Love Actually should be sentenced to death in the electric chair; and I’ve not seen Wimbledon, because if I’m going to watch a film about tennis, which I’m not, I’m going to watch 1979’s Players, with Ali MacGraw.

So, I do believe that these films have built up a reservoir of bad will that has led to Year arguably getting a little less credit than it deserves. And, indeed, I will admit here and now that there is much about Year to which to object. There is, as mentioned, an eccentric man of the cloth, and there is a crowbarred-in and to-my-mind unfunny scene about Josh disgracing himself in front of Nat’s parents by employing a slang term for the vagina in a game of charades. However, it seems to me that the chief tripping-up point for the film’s viewers is the overall unappealingness of the characters in this love quadrangle. Yes, this is potentially problematic because characters in romantic comedies are, by convention, and even if I myself don’t happen to like them, supposed to be likeable, unless they are obviously supposed to be unlikeable, as in the case of a philandering boyfriend, or a girlfriend who is a rampant social climber and/or has no sense of humour. However, while there are no outright devilmen or devilwomen in Year, Nat is uptight and has an unkind tongue; and Josh is fairly daft, and, bizarrely, takes exception to Nat’s one endearing quality – namely, her habit of singing the incorrect lyrics to popular songs. Chloe, while potentially by far the most tedious and unrealistic of all the characters, is actually the one who seems the most like a human being with whom you could stand to go and have a drink. I would say this is due, first, to Mazer having pulled out all stops to make her bearable, because of the fear that a character who is so right-on will be about as much fun to watch as reading an opinion piece by a member of the Greens; and due, second, to the efforts of Faris, whom I consider to be a genius. Guy, on the other hand, is totally ghastly because, scion of a wealthy family that he is, he not only talks about how his employees are his family, but impresses Nat by spouting a whole lot of marketing-theory pile o’ horse that he was, allegedly, taught at Oxford, which just goes to show how drastically that particular seat of learning has declined since the days of Brideshead Revisited.

However, except for Guy, the relative unattractiveness of most of the characters in Year did not trouble me overly, because it seemed so entirely realistic, given that, in life, lots of people with no attributes of which to speak end up in relationships, quite often with each other. As well, for most of the film I feared and expected that Nat and Josh would stay together, and that it was all leading to a paean to the – as far as I am concerned, overrated – institution of marriage. However, Year defied my fears, as (SPOILER ALERT!) Nat and Josh dump each other, and take up with Guy and Chloe; this struck me particularly because even though Nat and Josh are flawed, they are not bad people, and bad people are usually the only people who are allowed to get dumped in romantic comedies. Now, I’ve heard that in Four Weddings and a Funeral, Hugh Grant’s character was supposed to end up with Kristin Scott Thomas’s character, an old friend of his, not with Andie MacDowell’s character, a woman whom he barely knew, but that he hared off to the altar with MacDowell’s character in order to pander to the American market. This was aggravating because, even though Scott Thomas’s character was quite a cold fish, the alleged original ending would have given Four Weddings a real point of view. Year, on the other hand, at least shows some courage, in not imbuing, just because they happen to be legally wed, Nat’s and Josh’s relationship with a gravity it doesn’t deserve.

6 Responses to “I Give It Some Credit”