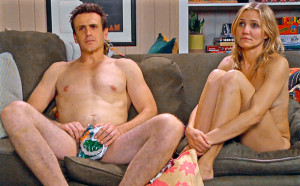 Without doubt, Hollywood has changed since the nineteen thirties

Yes, I saw the much-derided Jake Kasdan flick Sex Tape and, yes, my life is empty. I took the time to go to the cinema for a viewing partly because as, I’ve proclaimed before, I like films about middle-class people who live in big houses; partly because I like Cameron Diaz, as she appears to have a zest for life that I do not share; and partly because the film has had fairly horrendous reviews, a thing that always sparks my, generally dormant, curiosity. So, with the usual timeliness that this website displays, here I am, quite some time after Sex Tape opened, penning my thoughts on it; and I must say that it did give me something to chew on, just as a cat does not have, despite what conventional wisdom would have us believe, with a catnip mouse.

In Sex Tape, Jay (Jason Segel) and Annie (Diaz) are a couple who no longer have sex (interestingly, even though Diaz is, in life, eight years older than Segel, she actually looks younger than he does, but, I suppose, has not been worn down by fronting up, day in and day out, for the thousand-plus years of How I Met Your Mother). Thanks to the demands of Jay having some kind of job that I don’t understand and Annie having a blog (which is about to become massively lucrative, something that is, with all the unlikely things that happen in the film, perhaps the most unlikely, though I admit she is a mommy blogger, and they really do have much more chance of making money out of blogging than does an emotionally stunted middle-aged person such as myself). As well, Jay and Annie are raising two incredibly obnoxious children (why do Americans think sassiness is a more desirable attribute in a child than humility?), in yet another example of Hollywood making propaganda about the glories of parenting while simultaneously making it seem the most unattractive prospect since that of marrying Prince Edward.

So, as Jay and Annie seem able to palm the kids off on the grandparents at every opportunity, and in celebration of Annie selling her blog to a company that manufactures some kind of wholesome mother-and-child products, and is headed up by a man named Hank Rosenbaum (Rob Lowe), they have a rare night alone together. (And, by the way, even though Lowe is perhaps for the first time in his career playing a Jew, he phones in exactly the same performance he gives in Parks and Recreation, which if you’ve never seen Parks and Recreation, you will enjoy.) After several unsuccessful attempts at intercourse, Annie comes up with the idea that they should film themselves while they attempt every position in The Joy of Sex. By means of technical things to do with iPads, and due to the fact that Jay is a compulsive buyer of these devices and passes his used ones on to, apparently, everyone he has ever known, the recording gets out into the community, and eventually onto the internet, and the couple’s need to get it back leads to a number of contrived situations.

Now, despite all its awful reviews, I’ve seen more excruciating films than Sex Tape; I’m not saying there was anything that was actually good about it, but I laughed, a little, once or twice, and it did not make me angry. However, there is also a lot about it that does not add up. Some have found the couple’s ignorance of the technology not to be credible, but that was was all too credible for me, given that I don’t understand it either; no, it was other aspects that made me wear the same look of mild confusion that was seen on the face of Mark Philippoussis in Age of Love. For example, when Jay and Annie go to Hank’s house to retrieve the iPad, why don’t they just ask him for it back? Yes, as my father used to implore whenever we questioned the action we were seeing on television, it’s what’s in the script, but if a person had given me a used electronic gadget and they turned up on my doorstep and said they were taking it back because there was something on it they needed, I would return it, no questions asked, which is what anyone who is not as insane as Phil Spector would, surely, also do. I cannot see there would be any need for me to pretend I was dying to see the person socially, to take cocaine with them or be chased by a vicious dog.

Mostly, though, I just couldn’t really understand why Jay and Annie were so worked up about retrieving their sex tape; it’s not as though what they were doing was going to get them into trouble with Operation Yewtree. Speaking personally, if I’d made a sex tape and it were unleashed upon the world, I wouldn’t be thrilled but, as an obscure person, I doubt I would care as much as Jay and Annie, as long as I wasn’t doing anything that could see me taking the stand. Now let us consider that, of course, Sex Tape cast member Rob Lowe really did make a sex tape, back in 1988. In it, he could, I believe, be seen engaging in two threesomes: one with him and two young ladies (though when I say young, they were not, in a handy play on the title of his other 1988 error, Illegally Yours, illegally young); and one involving him, another man and a female fashion model. So, yes, while it all sounds like a music video that would only be played late at night, like something by the band Berlin before they sacrificed themselves on the altar of Top Gun, what he was up to was all relatively straight bat, which is, of course, why the sex-tape business had no lasting impact on his life. Basically, as he was a handsome young actor, the big surprise would have been if he hadn’t been engaging in threesomes. So, when it comes to Sex Tape, surely it’s not that remarkable that a couple would be having sex with each other, an issue also canvassed in a 1997 episode of Dharma & Greg entitled ‘Mr Montgomery Goes to Washington’, that I have, for no reason that I can pinpoint, never forgotten. In it, the free-spirited yoga instructor and uptight attorney are caught having sex in their car while he is running for congress, and his popularity escalates because, while they may be having sex in a public place, they are, after all, husband and wife, no matter how sitcom-unlikely their pairing.

I recall that when the bitterly disappointing Indecent Proposal was making waves in 1993, there was an episode of, I think, The Oprah Winfrey Show that canvassed the question of whether audience members would sleep with someone for a million dollars, as per the comely pixie-cutted Demi Moore’s activities with sun-damaged old Robert Redford. (I’d say that I’d like to watch Proposal again and see if it holds up, but the problem is that it didn’t hold up even at the time of its first release.) My response continues to be hell to the yes, even these days, when a million dollars is not what it used to be; and, no, I wouldn’t have to be doing the deed with someone widely considered to be attractive, or a millionaire, as long as he, or whomever else, were able to stump up the million that would stop me feeling grim whenever I open a piece of mail containing information relating to my superannuation.

However, while I might consider the Indecent Proposal question one that can easily be answered, it could still sustain an episode of a talk show. And with Sex Tape also, the most interesting aspect of it is the issue at the centre of it, but the problem is that the issue at the centre of it isn’t really that interesting. This is especially so given that the aspect of it that is actually interesting isn’t fully addressed: namely, why do Jay and Annie care so much about their sex tape going public? Even putting to one side the question of there being nothing especially untoward on it, the film operates on the basis that anyone into whose hands the tape fell would have been glued to every frame. But who really wants to watch a tape of someone they know having sex? It seems like something Michael Hutchence might have done if he had absolutely nothing else to do during the recording of Welcome to Wherever You Are. Jay and Annie should have been worrying less about getting their boring old sex tape back and more about knowing so many people who would want to engage in the creepy activity of viewing it.