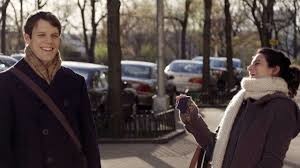 If only Donna’s scarf prevented her from speaking

I finally got around to watching the movie Obvious Child, which I’d been wanting to do for a long time, because I’m all for people having abortions. I was not planning to put pen to paper about this flick, however, mainly because I couldn’t be bothered, but then I found I was thinking about it so much that I was having one of my infrequent urges to express myself via the written word, rather than merely talking to myself while having a shower. However, as I wasn’t intending to write anything about what I had seen, I didn’t keep any notes and thus am writing from memory, so please bear in mind that I may actually be discussing things pertaining to several different movies entirely.

For anyone who doesn’t know, Obvious Child (written and directed by Gillian Robespierre) has at its centre stand-up comedian Donna Stern (Jenny Slate), who, after a messy parting with a cheatin’ man, has sex with an audience member, Max (Jake Lacy), becomes pregnant and has an abortion. Yes, certainly, a few other things do happen, such as Donna performing post-break-up sloppy-drunk stand-up comedy one night, or having an uncomfortable evening with a dickish male comic (David Cross), but the abortion storyline really is the long and the short of it, partly because it’s best not to look too hard at the Donna–Max relationship, which is so thin that it could profitably be used as tracing paper. Suffice to say that he is a human so ostentatiously WASPy and wholesome in contrast to Donna’s poor man’s Sarah Silverman brand of coarsness that it feels as though he got lost on his way to appearing on stage in The Book of Mormon.

Now, it is perhaps already becoming clear that Obvious Child contains elements that may annoy some viewers. To start with, it’s Sundance-slash-indy-New-York movie to the thunderbox, given we have offbeat Donna and her small-time comedy career, which is supplemented by her employment at an adorable bookstore with a proprietor so adorable that he doesn’t take exception to finding her napping on the job; there’s the way you have pretty much every character having a Brooklyn address; there’s Donna making a lot of jokes about being Jewish; there’s Donna’s quirky dad who makes puppets or something; the conviction the film constantly engenders that one of The Roches is going to appear at any moment, in person and/or on the soundtrack; and then we have one of Donna’s best friends being an alt-comic homosexual man who wears glasses, and basically performs the same rah-rah role as Demi Moore’s homosexual-decorator compadre in St Elmo’s Fire (though, unfortunately, without contributing a neon-lit Billy Idol mural to the proceedings).

Now, all of the above leads me to the critical problem that Donna herself is profoundly annoying. Clearly, it’s supposed to be endearing that she cannot manage her finances, and is dumb enough to get drunk and embarrass herself on stage, but, really, it isn’t. I wish more writers would understand that it’s entirely possible for a character to be fallible without being a total idiot in every aspect of their daily life: take Lindsay Weir in Freaks and Geeks, who screws up constantly but is never a ditz, and she’s a teenager, for god’s sake. And the other irksome thing about Donna is that her humour is so relentlessly crass, both onstage and off, that it’s as though we’re watching a movie about a not especially mentally gifted four-year-old girl who needs to get an abortion.

Of course, the tragic thing for me is that I’d feel far more comfortable banging on about coarse humour if I were a lot younger, so that it would then seem less as though I were The Governor and Donna were J.J., but this brand of comedy does frequently make me roll my eyes. As I’m not Queen Victoria, I don’t find it offensive because it shocks and outrages me; rather, I find it offensive when it’s goddamn lazy. Please, someone, tell me how a scene in which Donna teases Max at boring length for farting on her head while he’s taking a piss on the street, or her friend Nellie (Gaby Hoffmann) sitting on the toilet and announcing she’s going to take ‘a big, smelly shit’, and, drumroll, it turns out she may actually be performing this feat, superior to anything you’d see in an Adam Sandler movie? All right, yes, humour is subjective, a lot of people find this stuff funny (including, presumably, Obvious Child’s creative team) and there’s no reason every comedy ever made has to appeal to me (though, naturally, it would be better if they did). But all I would say is that if you are supposed to be on a higher plane than Sandler (as even Sandler himself is occasionally), can you at least make your crassness inventive somehow? Do that, and you will have no – or, at least, fewer – complaints from this particular old bag. Having said that, though, I cannot emphasise enough that the mere fact it happens to be sisters doing the poo jokes for themselves doesn’t qualify as a witty new twist on this type of humour.

And this brings me to a further thing that yanked my chain about Obvious Child, which is that Donna’s friendship with Nellie is yet another example of the kind of female friendship that is found only on screen or in novels. Yes, I grant you that Donna and Nellie’s relationship isn’t what the film is primarily about, so there are probably only so many grey areas that can be shown (ie, none) but how I hate to have fiction inflict on me this kind of creepily adoring female attachment, with the motherly boon companion who’s endlessly willing to listen to some screeching narcissist. It’s the equivalent of those invented male love interests who are fascinated by every detail of some gal’s feelings about every aspect of her life, past and present, no matter how minor, when, in reality, most men have so little interest in anything that happened to a woman before she met them that she may as well have been left at their doorstep in a basket.

Yes, I’m always happy to admit that I’m a sociopath, but I have to tell you that it curdles my blood when grown women who aren’t sexually involved want to curl up in bed together and eat soft food with a spoon – most horribly, in Broad City, in a hospital bed with hospital food!. (In Obvious Child, by the way, the curling up in bed of Donna and Nellie is mooted but, I need hardly say, rejected because of Donna’s hilarious farting plans.) Further to this issue, I was also given Silence of the Lambs-level horrrors by Leslie Knope’s icky adoration of her best friend, Ann Perkins, in Parks and Recreation; it’s as though some totally unnecessary campaign is still being conducted around the concept that ‘Hey, women do like each other, they’re not always making bitchy remarks about weight and competing for Brick, the Prom King!’. This then leads to these representations of woman-to-woman bonds that are so mushily repellent, I feel like I’m being force-fed cold mashed potato. I’ve noted previously that female friendships are as groaning with ambivalence as any other type of human relationship, given that most women don’t have the endless reserves of patience, understanding and nurturing abilities of a fantasy kindergarten teacher. There’s a difference between being willing and able to talk about ‘feelings’, for which women are – correctly, I believe – celebrated, and being a giant, mute ear canal.

But, now that I’ve got all the bad news out of the way, Obvious Child definitely has its joys. To start with, it’s always a pleasure to see Jenny Slate, although it’s quite possible that, thanks to Obvious Child, I now like her less than I used to. Furthermore, the gorgeous Polly Draper plays Donna’s mother, Nancy, one of the few characters in the movie who has a brain in her head, and what a too-rare delight it is to hear utterances from the owner of thirtysomething’s raspiest voice. In particular, Nancy and Donna have an endearing scene together when she defies all her daughter’s fears of her reaction and matter-of-factly tells her about her own abortion, and in which Donna manages to seem less like someone who should immediately be strangled with her own hair. And, speaking of abortion, the greatest pleasure of Obvious Child, is, of course, watching a film that, first, is about someone who does actually have one, rather than having a convenient miscarriage so as not to rile up the kind of idiots who deserve the capital punishment they’re so in favour of; and, second, that neither takes abortion lightly (which it’s hard to imagine anyone does, no matter how sure they are that they want to have one), nor overly seriously (‘I think of that child every day now that I can’t conceive and am stuck with just my high-paying job, and apartment with stainless-steel everything and a lot of exercise equipment!’). So, yes, I am all for giving the movie a bouquet (just as – SPOILER ALERT! – Jake sweetly does on the day Donna is having the procedure) for its strengths in this regard.

Speaking of which, I’ve read that, upon its release, the overpaid marketing wizards sold Obvious Child as an ‘abortion comedy’, and, as noted, it gets the abortion half of the equation right in portraying the procedure as a common, if confronting, event, rather than a tragedy. The real tragedy for those of us who would have wanted nothing more than to like Obvious Child unreservedly is that the same rigour and level of intelligence wasn’t applied to the comedy half of the equation.