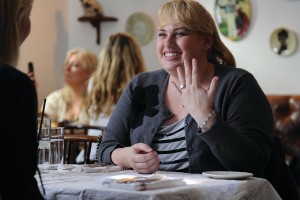 Rebel Wilson, engaged to herself

Occasionally I’ll view a film, or a live show of some kind, and it will make me realise that the world has reached some kind of apocalyptic stage whereby there is simply no point in humanity continuing. The first time I felt this was when I attended a performance of Oh, What a Night, a jukebox musical based around disco hits of the nineteen seventies that starred Gary Sweet. And I have just had this realisation afresh, simply through going to see the movie Bachelorette.

Now, part of the reason I felt this way was having Rebel Wilson’s conquest of the world shoved in my face at every turn. To start with, I was treated to the Pitch Perfect trailer both on the giant screen in the foyer and then as part of the, as they say, ‘pre-show program’. This flick seems to be about a college’s involvement in some kind of rock-eisteddfod situation, and to feature a lot of that horrendous killing-it-in-an-Australian–Idol-audition style of ‘ooooooh-hoh-yeah-yeah-yeaaaahhhhh’ up-and-down-the-scales, would-be-black singing that I only endure gladly when taking my position on the sofa as the sole viewer  (after all, it is merely a fact that gay men are going to be rich enough to have cable television) of Smash’s first, and probably last, free-to-air showing. Now, I do not know Wilson personally and have not even seen a great deal of her work, but find myself continually irritated by her boundless self-belief and big-noting of herself in interviews, especially given the work of hers that I have seen: namely, the above-mentioned trailer for Pitch Perfect; her unspeakable turn in Bridesmaids; and, speaking of Bridesmaids, in, of course, Bachelorette, which is directed and written by Leslye Headland, who has a name that is, indeed, like something out of her own motion picture.

At any rate, I, and two pairs of young women; one, presumably, gay man (and, yes, I realise I have perhaps been indulging in excessive stereotyping of gay men in this piece); a young woman with her gay-man BFF, a la Brynne Edelsten and the catty fellow who tormented her on Dancing with the Stars; and, most strangely, an older man who looked like Bud Tingwell, sat back and let night-before-nuptials shenanigans unfold before us. In brief, Becky (Rebel Wilson) is getting married, to a comfortably off human who is conventionally handsome, and her resentful friends, Regan – which is, I assume, some Exorcist-derived humour – (Kirsten Dunst), Gena (Lizzy Caplan) and Katie (Isla Fisher) start causing havoc that includes endangering Becky’s wedding dress. And the wedding-dress business is about the most gripping thing that happens, by the way.

The simplest way to describe these characters is to drop into the tongue of Bachelorette itself and say that they are, respectively, a control-freak bitch; a slutty, fucked-up bitch; an idiot; and a fat idiot. And, speaking of the last, my essential objection to Wilson on film is that her characters always appear to be mentally deficient, making for a screen presence that, to my mind, repels rather than attracts. In terms of the men, the groom was so unmemorable that I had entirely forgotten anything about him by the time I angrily placed my cinema ticket in the foyer rubbish bin; there is a sleazy, misogynist Hangover-style friend, who is, at least more memorable than the groom; Joe (Kyle Bornheimer), who is honourable (he won’t, even briefly, entertain the notion of date rape) and has had a crush on Katie since high school; and Clyde (Adam Scott), who cracks wise, and was Gena’s high school boyfriend. Caplan and Scott have a couple of effective scenes together, with quite decent dialogue that they improve with their good acting. In short, they outclass the material, which, admittedly, would not seem difficult, except for the fact that other talented members of the cast do not accomplish this feat. At any rate, I like to think of Caplan and Scott having a lot of drinks together after work, and getting upset over Party Down having been cancelled prematurely and so leaving them free to appear in this beastly festival of shit.

An extremely representative sample of Bachelorette humour is as follows. First up, we have lines of dialogue such as ‘If you do any more coke, someone’s dick is going to get sucked; the voicemail message ‘You’ve reached Gena. Eat a dick’; not to mention ‘It would’ve been great to see one more dick before I see Dale’s for the rest of my life’ (this from a character who was, frankly, lucky to be seeing even one dick); and, it goes almost without saying, the announcement ‘I gotta pee’ ending a scene in which two people have been having a serious personal conversation. The action includes Becky becoming upset after her friends have instructed the stripper at her hen’s night celebrations to call her ‘Pigface’; Regan assisting Katie in the act of vomiting after she overdoses on Xanax; and a pole dancer unknowingly rubbing the wedding dress on her genitalia after going to the toilet.

After all the above unpleasantness, there are, of course, happy endings aplenty. I would insert the words ‘SPOILER ALERT!’, except that it is simply impossible to imagine any reader being surprised to learn that Becky makes it up the aisle, and that Gena and Clyde finish up together, and Katie and Joe finish up together. Naturally, too, there is a ‘feel-good’ finale with unloved eighties/nineties music – in this case, The Proclaimers’ ‘I’m Gonna Walk (500 Miles)’ – always a solid guarantee that a film’s conclusion has been dreamed up by the Laziest Person in the World. As well, I have to say that I, for one, was intensely troubled that Katie ends up with Joe, who is supposed to be of very superior intelligence, given the fact that she may be the most stupid character I’ve ever encountered, whether in a film, on television, or in a book or play, and this in a movie that, as we know, features Rebel Wilson. The other problem with Bachelorette’s apparently un-thought-through upbeat conclusion is that I myself would have been so much happier if they’d just all died in a massive automative pile-up. I mean, geez, why should we want any of these people to prosper (except for, at a pinch, Gena and Clyde)?

Ultimately, one of the things that most makes me hate works like Bachelorette and The Hangover is the way in which they threaten to push me, through my trance of exhausted boredom, even more rapidly into old lady-ness. For example, I am a big fan of swearing but the relentless and uninventive employment of ‘bitch’ and ‘cunt’ was, due to the way it combines with Bachelorette‘s general ugliness of spirit, making me purse my lips. As well, I am generally extremely open to un-‘likeable’ characters, and I don’t care for the kinds of romances that rot women’s brains and lead them to be unambitious in their careers.

However, in Bachelorette the characters are so rude, hateful and witless, and the film so devoid of romance – in the sense of the appearance of a moment of grace or beauty, so that life  seems, if only very briefly, a gift – that I am one step away from clamouring to immerse myself in Nanny or Butterflies again. Or just any old thing starring Wendy Craig. Although, ideally,  And Mother Makes Three. Or And Mother Makes Five.