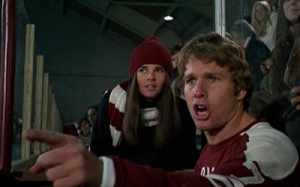 Of late, I have been Harvard-ing it up by watching the television series The Paper Chase, about which there will be a great deal more from me later (probably much later, as I still have a fair bit of it to go, and series TV had many episodes in the cocaine-in-the-workplace-friendly nineteen seventies and eighties). In the meantime, however, I’ve returned unexpectedly to this Ivy League scene of the crime, with a midweek viewing of 1970 ‘weepie’ Love Story.

I believe that I may actually have seen the film’s 1978 sequel, Oliver’s Story, before ever I saw Love Story. This is because, in 1979, for my eleventh birthday, a small group of girls and I were taken to a double feature that consisted of this, sadly, underperforming flick first, followed by, with conscious or unconscious irony, the reincarnation comedy Heaven Can Wait. I enjoyed it all mightily as, not having seen Love, I wasn’t in a position to realise the disconnect that arose through Oliver being set immediately after the action in Love had concluded but having been filmed eight years afterwards, with different people playing several of the supporting roles. Perhaps this is why the relevant parties at the Manly Silver Screen saw fit to exhibit Oliver’s Story with the Warren Beatty smash, rather than with the picture that had given it life in the first place.

Love is, of course, the massively financially successful account of the relationship between poor Catholic girl Jenny Cavalleri (Ali MacGraw) and filthy rich Wasp and Harvard attendee Oliver Barrett – ‘Oliver Barrett ‘the Fourth ’, no less – (Ryan O’Neal). The relationship begins with the snap-crackle-and-pop variety of hostile banter, given their different positions in society, with Oliver at one point admonishing Jenny ‘You put down anything in pants but verbal volleyball is not my idea of a relationship’. Nonetheless, and even though Jenny, at least initially, seems primarily to be the kind of tiresome person who laughs when someone she knows falls over, things continue apace, as they ostentatiously read books together, and namedrop Mozart and Bach. Frankly, this is a film with a level of class consciousness that would see the butler from The Remains of the Day sitting back with a contented sigh. Oliver’s immense wealth is especially clear to the viewer when he takes Jenny home to meet the folks, and we discover the existence of not only an old retainer called Florence who refers to the ‘drawing room’, but a truly hideously decorated house, complete with columns everywhere and antlered heads stuck on the wall, which looks like it should be sheltering Klaus and Sunny von Bulow.  Oliver’s snob-on-the-level-of-the-snobs-in-Caddyshack old man (Ray Milland) cuts his son off without a cent after he insists on marrying Jenny, a conversation that, naturally, takes part in a violently Establishment-style haunt full of cigars and heavy wood panelling. Despite Oliver arguing cogently that his lady wife-to-be is ‘not some crazy hippie!’, his father is unyielding.

Myself, I think that Oliver the Third has a point, as he only wants them to wait a while; he is not forbidding the bans completely. Also, had they held their horses, Jenny wouldn’t have had to relinquish a scholarship to study music in Paris, France, in order to put Oliver through law school; no one even raises the issue of why there should be no question whatsoever of him putting off the wild excitement of first-year law for another twelvemonth or so, so that she can realise her dream. However, all the sacrifice appears to be worth it, Oliver’s absorption in his studies being made clear by means of a scene in which a big old law report so enthralls him that he fails to notice Jenny applying a sandwich spread called Skippy to Wonder Bread and so, presumably, misses out on this delicious sandwich. Ultimately, Jenny falls sick and dies soon after Oliver has graduated and they’ve finally moved to a bigger apartment, which is, indeed, a case of terrible timing.

Peculiarly, when the oddly named Doctor Shapely informs Oliver that Jenny is dying, he never at any time tells him what’s actually wrong with her. While Oliver is, of course, very upset at this news, I feel that he shows a questionable lack of curiosity in never inquiring about what the exact nature of her ailment actually is; nonetheless, he manfully takes on the task of, as instructed, pretending to her that she is as right as rain. These were, of course, the days when, unbelievably, a given person wasn’t necessarily the first person to find out that they were at death’s door.  In fact, in the nineteen fifties, when Rex Harrison’s third wife, the lovely and enchanting Kay Kendall was dying, it is said that he kept it a secret from her until the end. In certain ways, this demonstrates considerable compassion on the part of a man who seems otherwise to have been unpleasant to everyone who crossed his path, even telling his performer son that he would not be coming to see him in a show because, as he put it, ‘I’m afraid it would bore me dreadfully’. Ever since I first heard about Harrison and Kendall, I have been unable to decide if not telling someone that they are dying, and carrying on as normal, is unbelievably kind and brave, or completely wicked.  In any case, Jenny when unwell is still firing off the quips and caring only for Oliver’s welfare, when, of course, people who are dying are generally depressed, bad tempered and on the selfish side, and who can blame them? Jenny’s high spirits are probably assisted by her apparent rude good health, terminal illness not even stopping her from managing to walk in the snow in flared pants just prior to being admitted to hospital, before – some time later, and articulate and name-checking famous classical composers to the end – expiring.

I would be lying if I said there weren’t much to enjoy in Love Story, even if I also have to say that it never ceases to amaze me how crappy Harvard looks both in film and on television; I always think that, considering the fees it charges, it should resemble more closely a hotel that Gianni Verscace would have designed. The university’s look of grimness is not assisted by the fact that, judging by the cinema of the period, everyone in the early seventies lived in an eternal winter. In Love Story, it barely ever seems not to be snowing. On the upside, the beautiful MacGraw manages to convey a fair amount of charm, even as a tiresomely feisty young woman, and looks a treat in an assortment of tartan miniskirts and plaid pants. O’Neal also looks a treat, in a wardrobe that was designed by an organisation called ‘Botany 500’. Speaking of O’Neal, it is oddly confronting to see him looking trim and handsome and attracting sympathy, given that he appears to be someone who even other people about whom people don’t have a good word to say – like the relentlessly entertaining Robert Evans (namely, in his magnificent memoir The Kid Stays in the Picture, and interspersed amid all the talk of his butler) – don’t have a good word to say.

Love Story’s tagline is, of course, ‘Love means never having to say you’re sorry’, which always mystified me. Until very recently, I had thought it meant that people in a couple had carte blanche to do whatever they wanted without even needing to apologise, but then I realised that all that was required was for ‘say’ to have been italicised on the poster for it all to have been much less opaque. Italics or not, however, the whole thing most certainly struck a chord with the populace. Love Story’s delightful-sounding director, Arthur Hiller, remarks on the DVD’s commentary track that he was grateful for the film’s timing, as ‘two years sooner, we would have been run over by the motorcycles, there were lots of motorcycle pictures’.

On the one hand, hearing that makes me want to go back in time and somehow delay the release of Easy Rider, as Love Story is a massive pile of flapdoodle and its nomination for seven Academy Awards will forever be a thing of mystery.  I can only imagine that its success was somehow due to, as with everything else to do with Hollywood in the nineteen seventies, everyone being bummed about Vietnam. Still, it’s a film you don’t tend ever to forget, and I’m not sure whether this is despite, or because of, the fact that it is so very preposterous. And even I have to admit to finding it touching when, quite early in the piece, poor doomed Jenny, explaining why she rejected the Catholic church, says that it was because ‘I never felt there was another world better than this one’.

6 Responses to “All Out of Love Story”