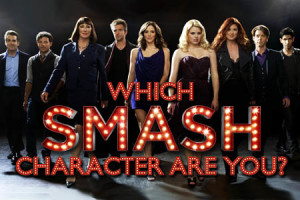 And that’s what I call the question of the century (surprisingly, I’m Karen; I was positive I’d be Kyle)

Yes, I’ve jammed the word ‘Reflections’ into the title of this piece because I’m quietly confident that doing so will give me carte blanche to jump around from topic to topic, without needing to make any kind of coherent argument; also, it sounds like the name of a bar in a Hilton hotel in the nineteen seventies. That said, I’ve lately been engaged in certain activities that have packed my mind with thoughts about the complexities of the state of being a fan, and about the television show Smash.

Smash is, of course, an American television drama with songs, the jumping-off point of which is the mounting of an elaborate Broadway musical called Bombshell, from the hands of crack writing team Julia Houston (Debra Messing) and Tom Levitt (Christian Borle). This work, natch, concerns the glorious Marilyn Monroe, and the heart of Smash is the duel between perennial chorus girl Ivy Lynn (Megan Hilty) and Iowa naif Karen Cartwright (Katharine McPhee) to portray her on stage. Other especially notable figures are glamorous producer Eileen Rand (Anjelica Huston), Bombshell’s parent-slash-icy overlord; temperamental, manipulative director Derek Wills (Jack Davenport), who strides around, uses his English accent to bellow at people and wears ankle-length coats in the cold weather; and brattish film star Rebecca Duvall (Uma Thurman), who has a stint playing the role of Monroe, thanks to the backers’ lust for having a ‘name’ in the lead. In the second – and, sadly, final – season of Smash, ‘cutting-edge’ musical Hit List is thrown into its glittery soup, and we see it and Bombshell vie for the love of the press, the public and the Tony Awards voters. There are, therefore, new notable figures, particuarly the horrible Jimmy Collins (Jeremy Jordan), the volatile genius largely responsible for Hit List, who spends almost every hour of every day chucking mentals about one thing or another. But before I go any further, I must point out that I have totally been oversimplifying Smash, on the level of dashing off a few bullet points to prepare someone to perform especially complicated brain surgery. Suffice to say, its action also includes an attempt to adopt a Chinese baby, an examination of the art of the dramaturg, a prosecution for white-collar crime, a poisoning, the workings of the New York Mayor’s office, multiple sexual harassment suits and a musical based on Dangerous Liaisons, and that is merely what I can recall off the top of my head.

So, Smash has many elements to which anyone who has not been locked in an insane asylum for decades would object. Most of the time, it feels as though the episodes were written in a frenzy on the day before they went into production, given that storylines are constantly begun and abandoned, characters come and go, important motivations are revealed as afterthoughts and most of what happens is, at worst, inexplicable and, at best, unlikely. To name but one example, there is no possible way that ‘trendy’ young people from Brooklyn who wear snoods would be lining up around the block for Hit List, which seems a profoundly daggy affair, even if the production does incorporate revolutionary uses of social media. I am willing to bet a billion dollars that, in fact, it would have come to be known as Shit List, even as I freely acknowledge its strange charms. The simultaneous attraction and repulsion of Hit List is perhaps best summed up for me by the song ‘Original’, which appears to be about Lady Gaga and contains the lyric ‘Her tracks were leaked/And all the hipsters freaked’. In one way, that is profoundly embarrassing even to me and I’m forty-seven, but the other side of the coin is that ‘Original’ is insanely catchy, and fun to listen to and watch, even though I fail to see how anyone could execute those strenuous dance moves and sing live, as we are expected to believe is taking place.

And, regarding other bits of Smash at which stones have been thrown, I find it hugely exhilarating when Ivy and Karen spontaneously sing a Rihanna song in Times Square. I even have a soft spot for the dream sequence in which the principal cast sing ‘Under Pressure’, although it generally makes me want to hide in the bathroom when the non-singing cast are croaking away, because, as someone who also can’t sing, I just feel bad for them. Enjoying all the things in Smash that don’t quite work is not as simple as the – admittedly, highly enjoyable – activity of hate watching; it’s more that when I’m doing so, I feel a lot of affection for the human race with all its strivings and limitations, especially given that rousing tunes are involved. This is partly why I’ve watched all of Smash three times, when there is no possible way I would ever rewatch Grey’s Anatomy and this isn’t only because Grey’s is now up to what feels like its hundred and fiftieth season. I actually like Grey’s Anatomy, which at its best is a much more interesting, intelligent show than it’s usually given credit for, but its reliable competence means that it’s usually far less memorable and less enthralling to watch than all Smash’s dizzy heights and crazily incompetent lows.

The prime uncomplicated delight of the show, though, is watching Megan Hilty as Ivy. Her voice is so strong, so rich in emotion and so purely pleasurable to listen to that it would give the listener chills in a heatwave; and she is such a good actress that it always takes the Smash viewer quite a while to realise that Ivy is saying or doing something wholly preposterous. So, when Hilty performed in Australia this month, off I belted to Hamer Hall, in the company of, I would guess, every gay man in and around Melbourne. I am not going to write any kind of review, because professional reviewers have already said it all, very well. (This one, which, the writer herself admits, isn’t even quite a review, is notable for its unabashed open-heartedness.) Instead, I will concentrate on what has been whirling around in my mind since seeing Megan Hilty in concert.

Most strikingly, there was an atmosphere of near hysteria in the auditorium from the second she walked on stage (with a punctuality that impressed me no end and that I’d only before seen equalled by AC/DC) and gave us ‘They Just Keep Moving the Line’ from Smash, and this atmosphere never let up until the standing ovation at the end. It all reminded me of the description in the great Valley of the Dolls of the first club performance of Broadway belter, and eventual monster, Neely O’Hara, ‘They came respecting her energy and ambition; they left a raving, worshipping cult’, except that Hilty’s audience had arrived as a raving, worshipping cult. I saw a man lose the ability to speak after hearing an announcement that she would be signing CDs after the show. It reminded me of when ABBA toured Australia in 1977 and how it seemed – though I admit I was eight years old at the time – that the entire country was shaken from passivity into passion, as per a friend of mine once remarking, ‘I’m apathetic about most things but I do care about beetroot on a sandwich.’ And in the days that followed her Melbourne concert, I found myself constantly concerned about what kind of time Hilty was having in Australia, and even checking the weather reports to see how she would fare on that score (if you are interested, the weather in Melbourne was disgusting, but it looked to have been lovely in Brisbane, fairly pleasant in Sydney and not so pleasant in Adelaide). I felt sad when I knew that she was on her way home to New York, similarly to how bereft I was in 1982 on the autumn day that Duran Duran left Australia after their concert tour, leaving me to the mercy of teachers and exams, and boring everyday life.

Now, recently I was having a discussion with a friend about something of my own invention that I like to call ‘The Dinner Game’, whereby you quiz another on whether they would want to dine one on one with a nominated famous entertainer. My friend made the point that you can’t talk about whether you’d want to have dinner with, say, Albert Brooks, because there is no way he’d want to have dinner with some stranger, and if he did he would be an entirely different sort of man. Yes, I follow this logic but the point of the game for me is twofold: first, whether I’d have dinner with any famous entertainer, just out of interest, as long as I knew enough about them for the conversation not to be awkward; and, second, whether I’d really want to have dinner with someone I’m a huge fan of and risk not getting along with them, so that their work would be tainted for me forever more. I mean, what am I going to say to them? I’m a big fan! I really love your stuff! Yes, for all I know, compliments like this make these people feel better at three o’clock in the morning, but it’s not as though I’m going to say anything original that will lead to us really hitting it off. It’s not as though I won’t be insanely self-conscious and desperate to impress, and therefore either insipid or obnoxious, or possibly both. Essentially, there’s just no equality in the equation. To take an example from life, I am a fan of Tim Rogers (several You Am I shows have had the same effect on me as Hilty’s concert: namely, receiving an electric jolt of unadulterated joy at being alive), and I saw him in the supermarket recently, nattily dressed and staring hopelessly at a shelf in the toiletries aisle. Did I speak to him? Of course not. I feel more for this man’s music than I do for many of my blood relations but that doesn’t mean I want to have anything to do with him.

Finally, and in what I choose to think of as synchronicity, I recently visited the Marilyn Monroe exhibition at Bendigo Art Gallery. My mother thought it was sad that poor Marilyn’s things were being raked over in Bendigo; when I pointed out that perhaps she would be pleased at people tramping all the way to Bendigo for the purpose of an exhibition of her personal effects and costumes all these years after her death, the mater pointed out that Monroe would have had no idea where or what Bendigo is, which is no doubt true. At any rate, aside from the waiter at lunch saying, ‘I bloody love this booze’ when he poured us our wine, what I can’t forget is finding out that Monroe left all her possessions to Lee and Paula Strasberg, on the understanding they would distribute them to her loved ones, but that the Strasbergs instead had them all shipped to New York, eventually to be sold off. So, in conclusion, below is Megan Hilty in Smash, singing ‘Second-hand White Baby Grand’ from Bombshell. And, as far as I’m concerned, anyone who hears this and remains unaffected needs to question whether they are a sentient being.