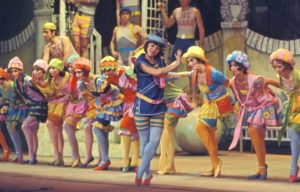 A scene from the musical No, No, Nanette

Controversially, I don’t have Netflix. This means that there are many works of cultural significance that I don’t get to see, and that I instead spend a lot of time watching season after season of sub-par medical and legal dramas, at least two of which I actively detest. Because of this, I haven’t actually seen Hannah Gadsby’s Nanette. I have, however, in my usual late-to-the-party fashion, now read a transcript of the show. And, yes, I appreciate how important delivery is in the art of stand-up comedy – I’ve never forgotten my Year Seven teacher’s digression into an analysis of the craft of Bob Hope – but these were the words that Gadsby was delivering, so I think reading the transcript counts for something.

Now, saying anything remotely critical about a piece of work like Nanette brings me face to face with my worst nightmare, of sounding like the strangely self-satisfied literary fraudster and serial plagiarist Helen Darville/Demidenko/Dale attempting to be amusing when writing for The Spectator. Also, I need to concede several things up front. First, ‘women’ is the only group in society I belong to that’s entitled to have a bee in its bonnet. And while, like everyone else, I’ve had a happier life than a lot of people and a sadder life than a lot of people, I consider myself mostly to have had a pretty easy time of it, so, yes, I understand and agree that I might not be able properly to comprehend a lot of things. Too, I’m old, which I know is increasing my risk of turning into Gerard Henderson. But, and apologies for the orgy of self congratulation, I like to think that I’m not becoming right wing with age. I like to think that I’m not homophobic. I definitely think of myself as a feminist.

And yet, I have reservations about the rapturous reception that Nanette’s received. And these aren’t so much to do with the content, even though Gadsby’s arguments didn’t make me change my mind about any areas with which I didn’t already agree with her, as exemplified below.

First, I do believe in separating the person from the art. A great artist who’s revealed to have been Jack the Ripper doesn’t retrospectively become a bad artist, any more than they would retrospectively become a bad pub landlord. Great art isn’t an excuse for terrible behaviour, but I can’t see that collective amnesia about, or rejection of, the good work of a person who has been proved to have done a terrible thing, or, like Woody Allen, hasn’t been proved to have done a terrible thing, accomplishes anything, except leave society at large even more bereft.

Second, I don’t feel especially sorry for Monica Lewinsky. She was twenty-two, not twelve, when she willingly entered into a sexual relationship with Bill Clinton. Also, she’s not exactly averse to publicity – I recall, for example, that shortly after the fact, she was photographed for Vanity Fair, against the backdrop of an American flag and looking very cheerful. Certainly, Clinton behaved way worse than Lewinsky did (if you even believe she behaved badly, which I don’t), and she shouldn’t have had to hide away in shame, but if you’re working the spotlight to death, you lose at least some of your right to complain about the glare, even when it’s harsher than it should be.

Third, I have a problem with any argument against self-deprecation. Yes, I appreciate that Gadsby is talking specifically about the issues involved with being self-deprecating when you’ve been forced to exist on the margins – as I understand it, that she’s had to put herself down, in order to be able to speak by making comfortable the people who are marginalising her. First of all, I doubt that Hannah Gadsby has traditionally had an audience of homophobes. Mainly, however, rather than anyone rejecting self-deprecation, I would prefer to see everyone being self-deprecating. Every one of us has looked like, and been, a fecking idiot to some degree, at some point, whatever our gender, race or sexual orientation, and let’s stop for a minute to consider how there’s never been a self-deprecating dictator. Most of all, though, the presumed alternative of listening to someone talking about their high level of self-acceptance isn’t my idea of terrific entertainment.

Yes, again, I know – I’m old! But I think comedy can be about anything, and I don’t think it should stay away from difficult topics and personal tragedy. I’m just saying that if they’re being talked about under the umbrella of comedy, the first object should be to craft the experience into something that’s intended mostly to be funny. Otherwise, the audience who has paid money to laugh is paying instead to be your psychiatrist.

Enthusiasm for deliberately unfunny stand-up is of a piece with that for narrative comedies that, rather than even attempting to be funny, are coasting on being ‘heartfelt’, or ‘gentle’, or ‘bittersweet’, or ‘searingly honest’. Something that, by and large, isn’t attempting to be funny is a drama or, at best, a dramedy. And you’d think the people making these shows would want to be doing so under the banner of drama or dramedy, as either of these is so much easier. Comedy tends to engender hostility – the audience’s default position towards anything or anyone they’re not already a fan of is that a dare is being laid down, as with the game of Chicken with tractors in Footloose. By contrast, people want to like dramas. I want to like dramas, while my starting point with watching comedy is feeling stressed because I know that if I don’t find it funny, I’m going to feel out of sorts, and embarrassed for everyone involved, even though I had nothing to do with what I’m watching. It’s virtually impossible, though, for a bad drama not to be hugely enjoyable (with the exception of Private Practice, about which I plan to write a blistering piece as soon as I finish all 111 episodes). The accolades that This Is Us has received (and, yes, I watch it religiously, even the horrendously boring Vietnam-War episodes) show how easy it is to make people think you’ve made great drama, when you’ve actually made something that could, without effort, be plundered and used as an advertisement for expensive technology that’s supposed to bring people together. An intentionally and genuinely funny line in a drama is a welcome surprise, while in a comedy it’s the least they can do. So, it’s irritating to see comedies receiving acclaim for not even attempting to do what, by definition, is the bare minimum they should be doing. It’s like someone who hasn’t even tried to write a book winning the Man Booker.

Isn’t it much riskier and more difficult to try to be funny than it is to do a show that is basically critic proof, because, given the content, anyone who doesn’t like it is outing herself as a reactionary with a heart of stone? ‘Comedy that makes you think and/or cry’ is all very well, but as soon as the balance tips over to the latter and away from attempting to make people laugh, it’s no longer comedy. Yes, comedy is subjective, and no comedian should be trying to make everyone laugh all of the time, but they should be trying to make someone laugh most of the time. And that’s why I would hate to think Nanette is the future of comedy. It’s an interesting show by a talented comedian that contains comedy and is partly about comedy, but it’s not comedy.

One Response to “Not Happy Nan”