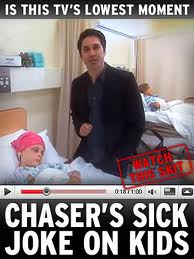 Note the 'Watch This Skit' option.

Really, I do not know why I persist in so eagerly devouring the opinion pages of major metropolitan dailies and reading other people’s tweets, given that I just find things with which I disagree violently, which then makes me rush into ‘print’ with my own pieces that, conceivably, will then merely cause irritation among my tiny readership, assuming, of course, that anyone is that emotionally invested in what I say, which I doubt. At any rate, a piece by Bruce Guthrie appeared in the Age on Sunday, 12 February, which vexed me, because it dealt with the-flogged-as-much-as-a-convict-doing-double-shifts-at-Old-Sydney-Town subject of what is acceptable fodder for humour. Frankly, this is a topic that I would like never to see addressed again, but here I am, back in the ring for another swing, like an old boxer fighting in a match the outcome of which no one is interested. Furthermore, and taking it as easily on myself as ever, I would like to make the point that this is a column about humour, rather than an attempt at humour, so sit back and prepare to be bored to death, everybody.

In essence, Guthrie kicked off with the fact that he was upset at the scene in Crazy, Stupid, Love in which someone, in response to hearing Steve Carell’s character crying in the toilet over his marital split, is laughing because ‘It could’ve been cancer, buddy! Hey, everyone, it’s just a divorce’. Guthrie was upset because he had the great misfortune of seeing the film with a friend who was a cancer patient and who has, very sadly, since died. As well, he tells a story of being with the same friend at the Presidents Cup golfing event and of hearing a group of people behind them laughing at the idea that a certain ‘prominent personality’ looked as though he had cancer and would shortly be dead. Naturally, the column eventually builds to a discussion of everyone’s favourite makes-Phar-Lap-look-young-and-vital dead horse, The Chaser’s Make-A-Wish foundation sketch. Basically, the point Guthrie is making is that cancer is never funny and that, with statistics indicating that one in three adults will be diagnosed with it, a person has a good chance of offending someone if he or she involves the disease in attempts at humour.

Now, putting the twats at the golf to one side for the moment, what bothers me about this sort of thing is the level of wilful misunderstanding of what is actually being joked about. Surely what’s being made fun of in Crazy, Stupid, Love isn’t the idea of someone having cancer but, rather, the daft things that people are capable of saying when faced with someone in despair. And regarding The Chaser skit, and as I’ve written before, I always thought it was obvious that what it was mocking was The Chaser team itself, given their depiction of themselves as heartless and venal. So, to anyone who would denounce the sketch on the basis that you, full stop, don’t laugh at sick kids, I would respond that, yes, that is absolutely correct, but that that isn’t what they were doing. As is obvious from the above, it seemed to me that the ensuing fuss was the equivalent of cramming the weather from The Perfect Storm into a cup made for Tinkerbell, so I found it a colossal Been Down So Long It Looks Like Up To Me-level bummer to be reading about it once more.

Now, the issue, it seems to me, is that Bruce Guthrie found himself in an excruciating situation – that of his sadness for his friend being compounded by, I would imagine, awful embarrassment. This would especially be the case if – and I don’t intend this flippantly at all – it had been Guthrie’s idea that they see this particular film. For example, I recall a time during which a friend of mine was undergoing a breast-cancer scare and, for some reason, I thought the ideal remedy for her state of mind was a group expedition to the play Blackrock. I’d not realised that, the subject of gang rape and murder not being quite depressing enough, this work would also have a subplot regarding a breast-cancer scare. In consequence, I spent most of the performance wishing for my own death and trying to read my watch in the darkness so that I could know when the horror would end. Now, this, obviously, isn’t nearly as painful as watching a film with a friend who actually has cancer and then having a joke related to the illness crop up. However, while I am very sympathetic to the awful predicament that Guthrie was in, I still think that his argument is lacking in the water department.

To start with, I do feel it’s a mistake to lump the dopey remarks of people who see fit to attend golf tournaments in with the – even if, arguably, tasteless – humour that professional writers have devised. This is not because I’m being a James-Spader-in-Pretty–in–Pink Snobby McSnob, railing against the common man and his pleasures, but because the professional writers do have, I assume, at least some kind of considered point of view behind their quips, given that these quips would surely have been made to jump through some hoops. Having said that, though, even in the case of the Presidents Cup ‘buffoon[s]’, I wonder if it’s precisely because cancer is so widespread, and because of the impression these days that everything will give it to us, that people feel the need, and entitlement, to make jokes about it.

Essentially, I feel uneasy at Guthrie trying to turn the fact that he happened to be in a very bad situation into ironclad evidence of what is or isn’t a suitable topic for humour. The fact is that going through something personally can cause heightened sensitivity to a particular issue and, while this can, I hear, lead to beneficial outcomes, I don’t believe it’s the ideal state of mind in which to be determining something as slippery as what constitutes acceptable subjects for comedy (of course, others might maintain that it’s exactly the right time to be doing so). For instance, I recall that after a schoolfriend of mine died, I was watching Australia You’re Standing In It and saw a sketch featuring the Dodgy Brothers’ cutprice funeral business, and that, for the first time in my life, I was quite shaken and upset that anyone could put funerals in any kind of humorous context. However, this feeling passed, and I’m extremely glad that I didn’t have a public platform to go around demanding that no one make comedy sketches that included the subject of funerals, as, if I had, I would have been an even more unpopular ‘teen’ than I was already.

Guthrie quotes approvingly an edict from Doug Aiton, ‘[o]ne of the ABC’s most successful radio hosts’, of the importance of remembering  that ‘…Hitler is never, ever funny’. Well, yes, clearly it is a mistake for a successful host on the ABC, or probably anywhere else, to be hurling around the Hitler gags, especially if they want their massive success to continue. But surely a difference in approach can be allowed between an ABC radio host and, for example, Mel Brooks. While I would, not being a psychopath, agree wholeheartedly that there’s nothing in the least funny about what Hitler did, that’s not to say there isn’t a comic element to the man himself, with all his ranting and raving. And, anyway, laughing at Hitler, would, surely, have been the Fuhrer’s worst nightmare, given the unlikelihood that he had a flair for self-deprecation.

A separate, but related topic, which is at the forefront of my mind due to the passing of Whitney Houston, is that of showing sensitivity towards those who have just died. While even I, and I am a deeply unkind person, find the instant breaking out of gags about dead celebrities to be a difficult impulse to understand, I simultaneously get a bit uptight when others put the old high horse through a spot of dressage, given that the dead, are, of course, the only variety of creature that don’t have any feelings. On the most recent occasion that I heard of the death of an acquaintance of mine, my first reaction, which I, furthermore, didn’t hesitate to vocalise, was to work out if I had ever made fun of her and, if so, how often and how many people would have overheard me doing me so. The thing is that would have been more to the point for me not to have been making jokes about her when she was alive, just as it would have been more to the point not to make jokes about Whitney Houston while she was alive. Of course, this fact would not have stopped me making such jokes, and it won’t stop me making fun of people in the future either, given that we’re all, except, apparently, for plucky ex-vaudevillian Mickey Rooney, going to die eventually and I simply would not be able to cope with everyone being off-limits for mockery; I just mean that after someone has passed away isn’t the time to start worrying about whether wisecracks about them are hurtful. And what exactly is the period of time that needs to elapse before it’s acceptable to crack wise about the deceased, anyway? I don’t believe this question has ever been resolved to anyone’s satisfaction, least of all mine.

Guthrie concludes his article with the words that ‘We should remember that one person’s joke is often someone else’s anguish’. Quite probably, but, as someone else once said, and I would love to credit them but I can’t remember who it was, good comedy never arises out of an overwhelming desire to be nice to people. In my own experience of people who are afflicted with cancer – and I do appreciate that is entirely anecdotal evidence as well – I can’t recall the topic of poor-taste-cancer-related humour ever being raised, and I don’t think that’s because, as Guthrie seems to be maintaining, society is more insensitive than it used to be. I think, rather, that it’s precisely because these people are dealing with the kind of problems that are at a level of gravity and genuineness that warrant maximum kindness, meaning that they simply have much bigger things with which to concern themselves.