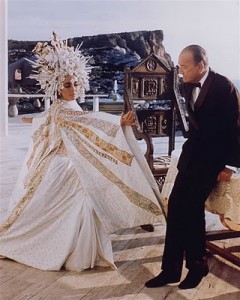 Exhibit this, if you please!

I would be willing to bet my almost-new copy of Madonna v Guy: The Inside Story of the Most Sensational Divorce in Showbiz (actually, very willing, as I was grievously let down by the way it contained almost more information about Ashtanga Yoga than it did about its alleged subject matter) that the least essential story in the newspapers at the weekend was the one on page three of The Age about whether Cate Blanchett could actually be the new Grace Kelly. Now, it goes without saying that there I was, gulping this item down; I believe, however, that the fact I read the piece may, yes, make me a screaming hypocrite but does, at least, qualify me to comment on its comprehensive daftness.

The article had a fragile tie to Bendigo Art Gallery’s upcoming exhibition Grace Kelly: Style Icon, off to which I shall no doubt be haring, even though there are already things about this display with which I take issue. To start with, there is the horrible newfangled usage of the term ‘icon’; just look in a musty old dictionary, and you will see all the proof you need that the word originally meant a ‘sacred’ painting or mosaic and so forth. Why is the marvellous term ‘idol’ almost falling into disuse into comparison with ‘icon’? Imagine if Australian Idol had been called Australian Icon? Ridiculous. Anyhow, enough with the unattractive pedantry on my part and on to the first of the, relatively, bigger issues, which is that I have to wonder how much credit these ‘style icons’, such as Grace Kelly and the peerlessly grating Audrey Hepburn, actually deserve.

To start with, it’s my understanding that someone else – someone along the lines of Ted (‘You know how bitchy fags can be’) Casablanca in The Valley of the Dolls – did actually envisage, design and make the clothes that these humans wore both in and outside of the motion pictures in which they appeared; Grace and Audrey were not exactly wrestling with a Singer sewing machine late into the night. Furthermore, they had the great good fortune of having film careers in the nineteen fifties and sixties, decades in which pretty much no one looked bad. (I do, however, admit that, by and large, women had horrid hairstyles in the nineteen fifties, meaning that this discussion needs to be confined to the neck down.) I would be far more willing to be hanging the plaudits on Kelly and Hepburn if – rather than To Catch a Thief or the watching-it-causes-me-to-make-a-face-like-I-just-accidentally-drank-orange-juice-after-cleaning-my-teeth-with-peppermint-paste Breakfast at Tiffany’s – these ladies had had on their resumés Electric Dreams, Valley Girl or Voyage of the Rock Aliens. Hepburn, praise be to God, made only a handful of screen appearances after the 1960s, and in one of them she was playing Maid Marian, thus cleverly limiting the amount of times that she could be immortalised looking terrible. Grace Kelly, of course, exited the Hollywood game in 1956. Had she not, there is a reasonable chance that she would have gone the way of Ava Gardner in Earthquake, in coming to look, to use a wonderful old term, blowzy.

As it happens, I don’t enjoy speaking disrespectfully of Grace Kelly, who seems to have been a nice woman who tried her utmost to do her best in the face of discovering that, in marrying Prince Rainier, she had made the biggest mistake not only of her own life, but possibly the biggest mistake anyone has ever made in history. This is a female who had worked her way up to an existence of dining, drinking and dancing at El Morocco-ish glamour spots; having affairs with most of her co-stars; horsing around and engaging in practical jokes with Alfred Hitchcock and his kind; and, most of all, getting to act, which she dearly loved to do. All this she traded in for being trapped in a French-speaking country approximately the size of a golf course and having flower pressing as her principal creative outlet. Being, understandably, very unhappy, Kelly got on the sauce, rather, and, by the nineteen seventies, was developing a tendency to wear frills and her hair in unbecoming buns. Thus, I find tributes such as Grace Kelly: Style Icon depressing rather than otherwise, given that they seem to me to be about nothing so much as peaking early in life. In terms of the burning question to which, The Age tells us, fashion experts have been turning their minds – that of whether ‘the movie star and princess of Monaco … might not have a modern-day equivalent after all’ – everything was, at least, most certainly not over for Cate Blanchett at twenty-seven, although she deserves no credit for seeing fit to call her children Roman, Dashiell and Ignatius; or for the fact that she and Andrew Upton having the Sydney Theatre Company as their fiefdom meant that a production of Upton’s play Riflemind was inflicted on the Harbour City.

Yes, I find the question of whether Blanchett is the new Grace Kelly to be perhaps the least consequential one of which I’ve ever heard, but I do appreciate that someone like myself, who has spent decades wondering about the truth of the rumour that a particularly attractive actress who appeared in The Young and the Restless in the nineteen eighties was a transsexual, is hardly entitled to have inconsequentiality stick in her craw. No, what gets me down most about these kind of articles is the hair-raising reverence that they display for the notion of women acting like ladies. For example, quoted in this one is a Mr Peter McNeil, of the University of Technology, Sydney, who ‘lectures on fashion icons’ (yes, that is what higher education in this country has come to), and who comments that ‘Blanchett is one of the few modern celebrities you couldn’t accuse of vulgarity or looking like a sex worker’. He goes on to state, finger-waggingly, that ‘Cate lives in a society that’s forgotten what modesty is …[a]nd modesty can be very sexy’. Geez, I was certainly disappointed that The Age neglected to interview anyone from the Taliban about their feelings on the matter.  Kristina Haughland, who apparently penned Grace Kelly Style, makes the point that even in Kelly’s era, others were actually flaunting their wares. However, she swoons, Kelly ‘let her personality shine through in clothes that were always appropriate and tasteful: shirtwaist dresses, well-tailored suits and understated evening wear’. Well, really, how filthily boring does that sound? It makes me want, even more than usual, to give Elizabeth Taylor a pat on the back for her completely preposterous wardrobe in Boom!. Frankly, I feel far more affection for someone who is willing to make their mark; I shall always remember, for example, Demi Moore wearing a bustier and lycra bike shorts to the Oscars in 1989, while I’ve already forgotten what Kelly’s apparent successor, Blanchett, will be wearing to 2012 Oscars. Much more importantly, though, if poor old Grace Kelly had been less keen on having all the trappings of being a ‘lady’, she would have been less hot to trot to marry a prince whom she barely knew and, therefore, wouldn’t have ended up mouldering away in a tax haven, worrying all the time about what her subjects thought of her, and also about her daughters, who were frequently a very great trial to her.

At the end of the Age article about the good woman herself and her apparent successor, Bendigo Art Gallery’s Karen Quinlan does step in as the voice of reason, warning that we ‘should be cautious about conferring icon status on Blanchett, or any living person’. Well, it’s certainly lucky that I know to pull my head in or I might have continued that enormous Blanchett-themed ceiling fresco on which I’ve been slaving day and night.

11 Responses to “For the Grace of God”