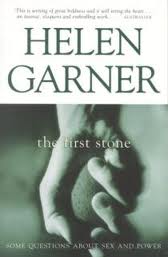 I did not have an especially exciting time at university and resent anyone who did; hence my slavering over any scandals concerning residential colleges. The most recent of these, of course, concerns St John’s and its outrages; among them the way in which faeces are ‘routinely found’, as the Sydney Morning Herald  hilariously put it, inside the kind of Gothic architecture in which someone’s wife should be being confined to an attic. Back in 1995, I was also obsessed with ‘faction’, thanks to Helen Demidenko having, aside from demonstrating Ukrainian dance steps in public, written a novel that was supposedly barely disguised autobiography but turned out to be entirely fictitious, and Helen Garner having published The First Stone, which was purportedly non-fiction but was really a quasi-novel.

It, of course, concerns the accusations against a Master of Melbourne University’s Ormond College, Colin Shepherd (in Garner’s words, she ‘felt free to invent names for all the characters’) of having groped the breast of one student, Nicole Stewart, while dancing with her at a function in 1992; and of making overtures, including breast groping, to another, Elizabeth Rosen. The work’s nucleus was Garner’s displeasure at the women having reported the matter to the police, and her horror that feminism was becoming punitive and repressive, leading anyone who was, or was not, anyone to write an opinion piece on the Stone. I was twenty-six when the book was published; and when the events with which it concerns itself took place, I was twenty-three, and so approximately the same age as the students. I am currently forty-four and, thus, closing fast on fifty, Garner’s age when the matter came to her attention.

When I initially read The First Stone, it annoyed me. It also fascinated me sufficiently that I once made a point of visiting Ormond College while holidaying in Melbourne, presumably hoping to see some live sexual harassment, which, sadly, was not to be. I had planned to re-read it ever since I moved here from Sydney in 2008, because of the thrill of being in the city where it all happened, similarly to my exhilaration at listening to Boom Crash Opera while travelling along Punt Road in a car. As well, I was curious about whether I would now swing in a more Garner-ish direction, given that the book makes much of the generation gap – feminist university students are stylish, and wearing Poppy lipstick, in sharp contrast to Monkey Grip, in which the women literally wear overalls, making it amazing that they found so many willing sexual partners, and also causing Noni Hazlehurst’s wardrobe in the film adaptation, which encompassed polka-dot shirts and men’s ties, to seem provocative attire by comparison. So, I too set out on a quest, though, unlike Garner, not by bicycle.

I’ll end all the suspense now by revealing that I found The First Stone as annoying as ever. First, it is a fairly slender volume, yet devotes space to largely meaningless detail. We learn that when Garner visited Ormond, there were ‘no signs of trauma’, when it would have been more noteworthy if there had, similarly to when biographers marvel at John Lennon’s unawareness that he would one day be assassinated outside the Dakota. Garner takes a bite from a cooking apple and it is so sour, her hair stands on end. She recounts her dreams. She sees a ‘powerfully built girl’ with a ‘pugnacious and grim’ face who has an anti-rape sticker affixed to her mountain bike.

But this fades into, even more, insignificance compared with the book’s emphatic lack of balance in dealing with its principal players. The action begins with Shepherd’s grilling by the police, during which he seems slightly bumbling but is acute enough to reveal that Rosen used to bunk off on her student service and ravaged her room – this, bizarrely, included drawing in White-Out on its walls. The first time Garner meets Shepherd, she notes that his voice is husky, as though ‘he had been talking a lot, or singing’. Well, perhaps he’d been screaming himself hoarse at the golden Labrador to whom we are also introduced; how did singing make it into the equation? He loves his children; he feeds Garner sweet biscuits. In contrast, Professor J—, a supporter of the accusers, offers no biscuits when he speaks with Garner; just sits with fists clenched and talks angrily. Stewart, giving evidence at the County Court, is ‘impressive and firm’, like a character who in the final reel of a film is revealed to have been a robot all along. The predominant image we are given of Rosen is, aside from her being an Animal House-style slob, that of a photograph in which her ‘splendid bosom’ is popping out of a dress. After a single one-on-one conversation with Shepherd’s wife (who has, naturally, produced home-made banana cake), Garner sees fit to announce: ‘I seem to recall that she kissed me goodbye; but even if she didn’t, that’s the kind of woman she is – spontaneous and sweet’. And that’s the kind of book this is, packed with not-quite facts and spurious conclusions. One of Garner’s main complaints is that Stewart and Rosen would not talk to her; if they had, perhaps they too could have been presented in a cozy whirl of dogs, children and biscuits. But given that they didn’t, and given that she only had half the story, Garner should have employed her immense talent as a writer of fiction and composed an actual novel instead of this hocus pocus.

Yes, in one sense, what Stewart and Rosen said happened to them is not a big deal compared with almost anything I can think of; in another sense, though, it is a big deal, especially considering the ongoingly noisome culture of some residential colleges. If events had happened as the women claimed, they thought they had one sort of relationship with this man, only to discover that he thought he had one with them that encompassed groping, after which the college council, having set up a committee to assess their complaints, expressed full confidence in him. And I can understand how ultimately going to the police actually seemed more straightforward than telling him to knock it off. Garner writes in the book of a time when she was a young woman and a middle-aged stranger on a train asked that she kiss him when she didn’t want to, and of her wonderment at his obtuseness; as she puts it, Why isn’t he reading my mind? But should it really require extrasensory powers for a man to comprehend that a woman who is just going about her business and is a stranger to him will not want to kiss him, or that a university student dancing with an academic won’t want her breast groped? Why should she be stuck with having to put the brakes on, when, through no fault of her own, she’s in a car with an unlicensed driver?

At one point in Stone, Garner recounts writing irate letters to the women and their supporters, but not sending them. Well, geez, I would like to know if she ever considered just keeping the entire book private, given that her ostensible purpose in writing it was to assist herself in coming to grips with the issues. Of course, her book, in fact, ended up being as public as can be. Frankly, this strikes me as not being exactly an unequivocal blessing, because, due to the authority it has through the quality of its prose, and given that it is now in its sixteenth printing, I find The First Stone at least as, if not more than, disturbing as anything produced by those endlessly controversial Internet trolls.

This piece originally appeared in the January 2013 issue of ‘The King’s Tribune’, but in a different form. First, I’ve done some tinkering of my own since I submitted it; second, the editors had some suggested cuts and additions, not all of which are incorporated here; and, third, the editors wrote the eighth paragraph and the final sentence of the printed version.

5 Responses to “The Stoner Mentality”